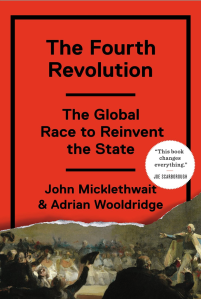 The main idea is that Western world undergone 3.5 revolutions over last 300+ years and is now on the brink of the 4th revolution. The first 3 were: establishment of nation-state; triumph of liberal capitalism of XIX century, partial rejection of liberal capitalism and establishment of welfare state. The half revolution of the second half of XX century was partial roll back of welfare state in America and UK during Regan and Thatcher administrations.

The current situation with its unsustainable debt, demographics, and level of benefits is pregnant with the next step of society development that should resolve these issues via 4th revolution. After detailed review of alternative to liberal democracy in form of Asian authoritarian capitalism of Singapore and China, authors came to conclusion that it is not the way Western world is going to follow. They expect that 4th revolution will come in benign form of technological and functional improvements to government activities that would allow resolution of current problems without sacrificing quality of life, political freedoms, and even welfare state.

This book starts with description of Chinese government school GELAP where future leaders are trained. The point is made that the student and teachers are eager to learn about western technology and management, but not only uninterested, but despise western political and cultural arrangements. It follows by discussion of Leviathan that seems to be suffering with elephant disease in all western democracies and reasons why it will inevitably be treated:

Authors put out their position that too little of government is more dangerous then too much and so they reject libertarian position of government as necessary evil. However they still believe that western democracies have better chance to meet new demands because it makes authorities listen to people. They also believe that democracies have higher risk for the same reason: listening to people makes politicians to do wrong things to meat people’s demands.

PART ONE: THE THREE AND A HALF REVOLUTIONS

Chapter 1: Thomas Hobbes and the Rise of the Nation-State

This is history of the First revolution – rise of nation state that resolved problem of incessant wars of everybody against everybody through overwhelming power of this state.

This chapter is short history of liberal state, as it existed in XIX century – Second revolution that provided for tremendous economic growth, but created massive groups of disenfranchised individuals at the bottom and top of society unhappy with their share of newly created wealth.

This chapter is description of last period of XIX and first half of XX century when unhappy people at the top like Marks and Engels developed ideas that energized bottom and as result implemented the Third Revolution that created bureaucratic welfare state throughout Europe and its spinouts after some totalitarian deviations into Communism in Russia and Nazism and Germany.

The final chapter of this part reviews a half Revolution of Regan and Thatcher based on ideas of Austrian school of economic effectively promoted by Hayek and monetarism of Milton Friedman. This half revolution somewhat pushed back government interference into economy creating some breathing space for western society via economic growth and prosperity for about 20 years. However this revolution failed to stop growth of government and even more important it failed turn back ideological offensive of welfare and bureaucracy forces, which practically took over education in schools and universities.

PART TWO: FROM THE WEST TO THE EAST

This is review of problems of Western government using example of California as the highly representative case. Here are the problems or sins:

The biggest problem however is the human nature: people love to get something from government and hate to pay for it. The result is mismatch between taxes and spending covered by public debt accumulated beyond any reasonable amounts.

The virtue and hope is that current democratic power in California seems to be able to move to solution by cutting expenses and increasing taxes, but it is far from success yet.

The Asian alternative is relatively small authoritarian government thinly covered by democratic procedures that deliver order and safety net, but does not interfere that much into business. It is discussed by using example of Singapore and current development in China.

PART THREE: THE WINDS OF CHANGE

Chapter 7:The Place Where the Future Happened First

The point here is that the future and seems to be quite bright for democracy future already happens in Sweden that moved back from being the most socialistic democracy to being efficient capitalistic democracy that successfully cut on government size and services without hurting majority. Similar process is happening in other Nordic countries. They also seems to discover ways to modify existing government services in such way that introduce competition and financial discipline. Sweden for example changes its pension system from defined benefits to defined contribution.

This chapter compares old business model of GM in 1930 with contemporary successful business model of Google and infers from this that only similar dramatic change could help fix the government. It briefly reviews previous attempts to this end that mainly failed, but states that this time it is different because there is too little space to continue on current patterns without big disaster. The remedies suggested are: more diversity, localization of government, more pluralism, and more opportunities for experimentation.

Chapter 9: What Is the State For?

It is a very short review of philosophy of government in America from Tocqueville, through old liberalism of XIX century and welfare state and crony capitalism of XX century with recourse to previously discussed remedies: trimming of entitlements and limitation on power of interest groups to transfer resources to themselves. At the end it calls to complete half revolution of 1980s and make it into the full-blown Fourth Revolution.

The conclusion is: the Fourth revolution is coming and it will incorporate technology to upgrade western democracy to condition that include the best of capitalism, competition, individual freedom, and even welfare state. The hope is that once again western creativity will generate new and effective solution.

I mainly agree with the thesis of 3.5 revolutions and close coming of the 4th. I also agree that technology will play tremendous role in dramatic change of society. I also agree that Asian way is not feasible for Western society, moreover I do not believe that it feasible on the long run for Asian societies either. However I do not agree that 4th revolution would produce only minor changes in existing arrangements. I think that it would lead to complete destruction of the welfare state. I hope that this destruction will come, as I suggest, in form of change to equal and marketable rights to natural resources, providing everybody with something to sell in exchange for resources and consequently creating limitless opportunities for free market capitalism with dramatic decrease in role of government and violence in economics and overall society.