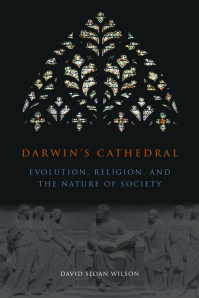 The main idea is that religion could not be possibly discarded as something that is not essential for human survival. It has high value as adaptation tool at the level of group’s evolutionary survival. Moreover, it is highly effective and often is necessary tool for survival even in contemporary world when individual has high level of dependency on the group. Finally the analysis of religion could and should provide tools and methods to analyze other unified systems of human society.

This is about looking at religion and church as unit of natural selection, pretty much the same way as it is commonly done for individual organism. Actually this approach to the group applies not only to the church, but also to any grouping in human society. More specifically this book designed to treat organismic concept of religious groups as scientific hypothesis.

Chapter 1. The View from Evolutionary Biology

The first chapter is review of relevant concepts of evolutionary theory. It goes through notion of functional thinking and defines fundamental problem of social life as conflict between individual and group survival. Darwin’s solution to this fundamental problem is view of adaptation and survival of individual with two levels of characteristics: individual and group with survival assured for individuals with best mix for adaptation. In this case culture, religion, and, morality are group characteristics adaptive for survival or not. Author also reviews here the issue of group definition and its relation to organism definition and defines human group as adaptive unit. He uses this definition to develop and present table of Evolutionary Theories of religion:

Chapter 2. The View from the Social Sciences

Here is presented Rodney Stark’s rational choice theory of religion (199x). The table of 20 propositions provided to explain this theory and another table of just 6 propositions to demonstrate its adaptive quality. Another example is somewhat older ideas of functionalism is Emile Durkheim “Elementary Forms of Religious Life” (1912). Also provided is philosophical assessment of functionalism via articles related to Holism – general idea of the Whole being more than sum of its parts. The chapter ends with idea that extremes are in the past and modern common denominator is multi-level theories of adaptation

Chapter 3. Calvinism: An Argument from Design

This chapter is a detailed review of adaptive value of religion based on history of Calvinism. It is natural before and after experiment, which quite convincingly demonstrates that “after” Geneva society was more functional and its members more adaptive to environment then “before”.

Finally table presented with 25 randomly selected religions and future research of their functionality discussed. However even at the first glance all these religions provided for basic functional value.

Chapter 5. The Secular Utility of Religion: The Modem Literature

This chapter is a review of contemporary research and literature about impact of religious believe and participation on prosperity of individuals or lack thereof. The results are very interesting. They demonstrate that religion does deliver benefits and it is in proportion to how strict and demanding it is, but only for individuals who need support such as new immigrants and/or individuals with personal problems. This issue reviewed using example of Korean church in Houston. Another issue is related to benefits and participation during life cycle of religious denominations. It seems to be going through dynamic process of poor helping each other to obtain mutual benefits via congregation, becoming richer in process and eventually falling out when help is not needed any more, normally in the next generation when gratitude is not carrying lots of weight any more.

Chapter 6. Forgiveness as a Complex Adaptation

This chapter presents analysis of religion from the point of view of Games theory. From this point of view religion often could be presented as set of adaptive conditional rules of type “DO X if Y is TRUE”. It looks like typical religion rules such as forgiveness comply with most effective strategies in theory of games: Tit-For-Tat with variation for Contrite TFT (one mistake forgiveness) and Generous TFT – forgiveness in proportion to frequency of mistakes. This follows with more detailed analysis of these rules as applied in Christianity. The history shows that it works as group adaptation, but fall far short from ideal of universal inclusion.

In this chapter author expands discussion to the level of General Theory of Unifying Systems with religion being just one of such systems. Others could be political, military, business, and any other types of human organization into groups. In this framework author discusses:

The book ends with call to learn and understand our unifying systems such as religion, so we could perfect them and fly higher rather then crash and burn because of destroying them.

I find myself in agreement with pretty much everything in this book. I also see religion as survival mechanism working at the level of group and developed via regular evolutionary process when group with better-developed religion would win over the group with less effective unifying tools. I would only note that I’d like to see more research on the role of individual susceptibility to religion or other grouping ideology. It is obvious that some individuals genetically more inclined to internalize ideology and act on it and some other much less inclined to do the same. I would also be interested to trace age related dynamics. It seems to me that religiosity of individual is changing with age depending on changing role of this individual in the group. It would make sense if there were biological mechanisms that make young adults much more religious (ideological) than older people who in turn much more inclined to put premium on maintenance of traditional practices then abstract ideology these traditions are based on.

In any case, the view at religion as evolutionary tool necessary for individual fitness via survival of the group is, in my opinion, the most reasonable way to look at it. This obviously means that religion should be embraced, rather then fought, but only on condition of tolerance to all other religions or lack thereof that satisfy need of diverse individuals in ideology. To push religion to the level of individual believes with tolerance as non-negotiable requirement, is probably the only way to maintain coherent society.