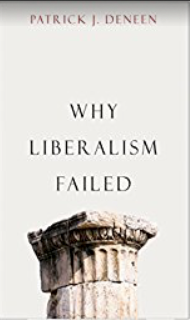 Here is author’s main point: “Liberalism has failed—not because it fell short, but because it was true to itself. It has failed because it has succeeded. As liberalism has “become more fully itself,” as its inner logic has become more evident and its self-contradictions manifest, it has generated pathologies that are at once deformations of its claims yet realizations of liberal ideology.”

The main inference that author provides is:” A rejection of the world’s first and last remaining ideology does not entail its replacement with a new and doubtless not very different ideology. Political revolution to overturn a revolutionary order would produce only disorder and misery. A better course will consist in smaller, local forms of resistance: practices more than theories, the building of resilient new cultures against the anticulture of liberalism.”

Introduction: The End of Liberalism

At the beginning author defines liberalism as philosophy, which conceived human individuals as rights bearing entities who could pursue happiness according to their own understanding. It supported limited government, rule of law, and independent judiciary. Then author complains that in current American society it all deteriorated, so Americans do not believe in existing institutions anymore and do not trust them. It resulted from raising division of population into elite and regular people with different resource availability, different believes and overall different life experiences.  In short – liberalism achieved equal opportunity meritocracy that led to huge division of society into successful few and unsuccessful many eventually resulting in their separation into different layers of society with the next generation deprived of equal opportunity. Author reviews the most important areas of live and tries to demonstrate how liberalism failed in each of these areas:

This starts with the statement that liberalism is committed to liberty and self-government and author goes into history of these ideas starting with Romans and Christianity, which produced Liberal ideology and idea of individual rights. Author however characterizes original Christian approach as an attempt to prevent tyranny by promoting virtue and education in virtue. He points to Machiavelli as the thinker who moved away from this unrealistic approach to the new realistic approach that accepted not very nice human features such as greed, pride, and selfishness, but seek to temper these features via division of power, so different interests conflict with each other, consequently limiting each other and forcing some compromise and accommodation for common good. Author provides more detailed discussion of the nature of liberalism and claims that it became the last standing ideology in 1989 when competing communist ideology practically fall apart. However, after that liberalism itself started falling apart in a number of areas because per author it is running out of cultural foundation that it inherited from religion and previously established society mores. Specifically, unabridged self-interest undermined and made irrelevant virtue that used to be it the core of behavior, mastery of nature produced unacceptable ecological costs, loosening of nearly all social connections undermined voluntarism, leaving individuals mainly on their own and directing all support to needy via formal tools of government. Author characterized this as 2 revolutions: The first: switch from communal objectives and actions to individual, and the Second: war against nature.

Author begins this chapter with history of left and right all the way back to French Assembly’s division between revolutionaries and royalists and going on until current American political division between conservatives (classical liberals) promoting individual liberty from governmental control and progressives (liberals) promoting collective liberty from limitation on the leaders of collective by either laws or individual rights. Somehow author combines them into one, claiming that both are liberal positions in their philosophical sources and practical implications: classical liberals via idea of social contract, while progressives via idea of social whole (we as people). Both were united in their struggle against aristocracy, but became enemies when aristocracy was gone, leading to interesting result of dual expansion of the state and individual autonomy.

This chapter is about transformation of culture that occurred under influence of liberalism. The old religion and cultural norms were mainly destroyed by leftist liberal who were seeking to undermine cultural cohesion of the society that impeded their social experiments in forming new humans that belongs to liberal super state rather than to family, religious, and local community. Author defines 3 pillars of liberal anti-culture: conquest of nature, denial of past as it was and its continuing redesign according to contemporary views, and change of notion of place, making it fungible and disconnected from individual’s background. Author reviews in details each of these pillars and concludes that it led to rise of leviathan, but even more important fact is that parasitic liberalism sustainable only until there are still remnants of culture it is trying to annihilate, which provide some cohesion to society. When these remnants eventually liquidated, society would not held together, leading to its demise, which would take liberalism with it.

FOUR. Technology and the Loss of Liberty

It starts with the note that infatuation with technology is a product of modern times and did not occur before. Author discusses a number of cultural artifacts prophesizing awful future catastrophes, and then points out that it could be result of foreboding about powerlessness before technological and societal developments. Then he goes to technology of liberalism that he defines as technology of self-government with interesting quirk that self-rule of collective actually suppress individual’s ability to do as he wishes, which comes only after liberalism become dominant, while before that objective was increasing liberty of individual. Author also discusses political technology such as Constitution and related ideological and legal artifacts that constitute technological society. All this also linked to actual technological infrastructure such as Internet and social media.

The main point here is that liberalism generally attempts substitute culture with anticulture resulting in substitute of liberal education with servile education. Author discusses here attacks against liberal arts, which were currying on traditions of the culture. He documents multiple examples of these successful attacks in universities that become bastions of liberalism. Author also opposes conversion of universities into what he calls multiversity, which substitutes humanities with purely technical and scientific instruction.

Here author discusses how anticulture brought in by liberalism and promotion of statist ideology led to creation of new aristocracy that crosses national borders and consists of people all over the world who went to the same universities, obtained the same believes and enjoy upscale lifestyles supported by income from positions in bureaucracies and government supported industries. These people often quite contemptuous to majority of their countries who do not have elite education and similar opportunities and make living in difficult global market place where they are not competitive with low paid works with similar low-level skillset from developing countries. Author also discusses his believe that this new aristocracy came from classical liberalism, which promoted free market place and support for meritocracy at the expanse of commonality. Author reviews a number of recent books dedicated to discussion of these issues.

SEVEN. The Degradation of Citizenship

In this chapter author looks at liberalism’s attack against citizenship and use of democracy as paramount value that justifies suppression of real and previously protected rights such as freedoms numerated in bill of rights and their substitution by materialistic and unrealistic rights like good job, decent income, free healthcare, right not to be insulted, and so on. Interestingly enough liberalism managed simultaneously to idolize democracy in theory and suppress it in practice everywhere where it is possible.

Author conclusion is somewhat paradoxical: “Liberalism has failed because liberalism has succeeded”. It succeeded in its destructive function removing old aristocratic system, but it filed in its constructive function to provide something better for individual happiness. Author posits that there is no return and proposes initial steps that he believes would help to move beyond liberalism:

I think that there is quite a bit of confusion that author demonstrates all the time. If by his definition liberalism is about individual freedom and limited government, how one can state that it failed by creating big administrative state that increasingly stifle economy by regulation and keeps subverting constitutional guaranties of Bill of Rights? This confusion probably comes from poor understanding of real or classical liberalism vs. leftist, name-stealing liberalism. As ideology of liberty liberalism in XIX and early XX century was directed against businesses united with state and local, authorities via massive corruption in their struggle to suppress independent business and labor. These independents either presented too much of competition or limited business options by creating unions that tried monopolizing access to labor. At this point of history, the main ally of these groups was federal bureaucracy, who had limited opportunities for enrichment via corruption by virtue of being too far away and above from real cash flows of mainly small and middle size business. This bureaucracy was handily supported by top level journalists and intellectuals deeply infected by socialist ideas that pretty much boiled down to believe in supreme effectiveness and efficiency of big bureaucracy, preferably at the level of total control over society’s nationalized means of production. Early in XX century when old aristocratic forces practically self-destroyed during WWI, liberalism was highjacked by its socialist branch, living only small group clinging to ideas of individual freedom and limited state. The vast majority moved to socialist ideas, with half moving fully into collectivistic direction rejecting both individual liberty and limited state, consequently producing Nazi and Communist totalitarian regimes. Another half also forfeit limited government and moved to create ever-growing welfare state, while still retains individual liberty, including limited property rights and some remnants of legal structure. Both failed: the first half quite dramatically as result of losing in WWII for Nazis and in Cold War for Commies, while the second one – Sozis failing much less dramatically now.

In my opinion the solution could not possibly be “outgrow ideology” because there is no possibility of human society without ideology. Neither it is possible to return to liberalism of limited government mainly providing security and legal framework without some serious changes in societal foundations that would support individuals ability fully practice both their individual and economic freedom with such arrangement that would guaranty everybody real access to resources needed for this even if human labor does not have lots of value for production of goods and services.