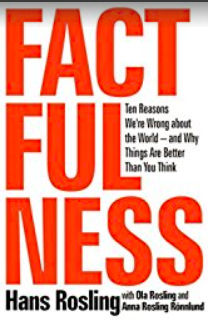 Author uses this book to demonstrate that humans were evolutionary developed to make quick and easy decisions and turn them into actions without careful analysis of underlaying facts, which results in many an error, so such actions should not be taken. However, the main idea is that we are not doomed to keep doing it and that our intellectual and communicative abilities could be used to develop a set of tools to handle a variety of typical “instincts” that become impediment to good decision making. Author presents just such set of tools that he combines into what he calls Factfulness.

This starts with author’s recollection of his fascination with magic, specifically with the sword swallowing and how he learned to do this trick, which is based on human anatomy. He makes a point that even being a doctor did not help him to understand how to do the trick until he learned the specifics. After that he moves to a small quiz, which quite convincingly demonstrates that people, even those interested in politics and economics greatly underestimate progress made in last few decades in many areas so that currently developing (poor) countries have quality of live as good or batter that developed (rich) countries had just a few decades ago. Then author links it to optical and other illusions and fast / slow thinking that was evolutionary beneficent for hunter-gatherers but become somewhat of impediment for understanding the world in our time. The remedy is to develop process of factual confirmation in order to avoid ideas and action based on false understanding of reality.

Chapter One: The Gap Instinct

This chapter starts with misconception of child mortality. It turns out to be a lot smaller than people in western world think. This is result of progress in knowledge and its application that moves a lot faster than people perceive. In reality developing countries catch up with developed in this parameter. Here is picture demonstrating this thesis:

After discussing a few more parameters author presents the real picture of people distribution by 4 levels of income and he defines it in very clear form for all 7 billion people living now:

Author then discusses Gap instinct – human propensity to break any phenomenon, object or group into two qualitatively different objects like rich and poor. It is also often supported by propensity of bringing everything to averages, when in reality there is much more different statistical distribution often overlapping. Here are two examples:

Author also discusses relativity of comparisons and propensity of comparing extreems. For example poverty level in USA is somebody at level 3 of income, so typical reader of this book would have difficulty to understand what real poverty is.

Author presents the the key point of this chapter in such way:

Factfulness is … recognizing when a story talks about a gap, and remembering that this paints a picture of two separate groups, with a gap in between. The reality is often not polarized at all. Usually the majority is right there in the middle, where the gap is supposed to be. To control the gap instinct, look for the majority.

Here author starts with recalling his background as child of Dutch family in Egypt and how he nearly drawn in the ditch as toddler because sewage ditches where not walled out. Then he proceeds to discuss that humans generally prefer negative picture of reality because evolution selected out over optimistic individuals. He supports this thesis with multiple examples for live expectancy, mortality, criminality, and others. The final inference:

Factfulness is … recognizing when we get negative news,and remembering that information about bad events is much more likely to reach us. When things are getting better we often don’t hear about them. This gives us a systematically too-negative impression of the world around us, which is very stressful. To control the negativity instinct, expect bad news.

This is about human tendency extrapolate any sequence as straight line into the future, creating typically false expectations. Author starts with panic about Ebola epidemic, and proceeds to other extreme applications like population bomb. He provides a very interesting graphic presentation of the process:

Factfulness is … recognizing the assumption that a line will just continue straightand remembering that such lines are rare in reality. To control the straight-line instinct, remember that curves come in different shapes.

The next stop is fear and author recalls his own fit of fear when he mistakenly thought that WWIII started. Then he proceeds to discuss various causes of fear both rational and not so much and role of attention directed at them in huge exaggeration of real dangers. Here is summary:

Factfulness is … recognizing when frightening things get our attentionand remembering that these are not necessarily most risky. Our natural fears of violence, captivity, and contamination make us systematically overestimate these risks. To control the fear instinct, calculate the risks.

This is basically about triangulation and resource allocation. Once again it is based on author’s experience in 1970s as a doctor in Mozambique, one of the poorest countries in the world where he had to make difficult decisions to stop helping dying child before him in order to provide help to many more that were not directly in his presence. This decision caused protest from outsiders and author points out that decisions could be valid or not only if the proper scale of factors selection is applied. The size instinct that author refer to is the human tendency to overstate importance of everything visible on hand and understate importance of everything note visible, getting things out of proportion. Author also discusses Pareto rule 80/20 and human propensity to forget about ratios. As example he provides graph from the field of energy where popular discussion of sources is way out of proportion with real production: 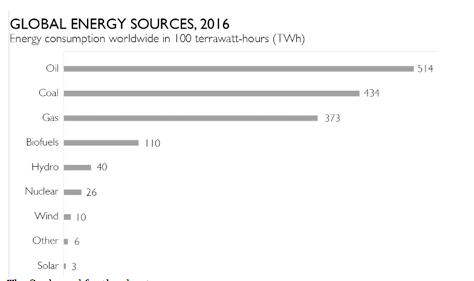 The final word for the chapter:

Factfulness is … recognizing when a lonely number seems impressive(small or large) and remembering that you could get the opposite impression if it were compared with or divided by some other relevant number. To control the size instinct, get things in proportion.

This starts with author experience of eating unusual for him and culturally disgusting food. From here he jumps to why it is so and concludes that it is generalization instinct when people assign new things to familiar group. He uses as example incorrect believe of rich westerners that children in poor countries are not vaccinated. Another non-statistical example is the story of generalization of elevator technology in western world to India, where it could cause bodily damage because elevators in India do not have usual safety features. This effect often leads to situation when people “know” something that just is not so. Then he proposes to correct it by using his 4 levels of income scale and discusses how it is applicable pretty much independently of culture and geography everywhere in the world. Here is author summary:

Factfulness is … recognizing when a category is being used in an explanationand remembering that categories can be misleading. We can’t stop generalization and we shouldn’t even try. What we should try to do is to avoid generalizing incorrectly. To control the generalization instinct, question your categories.

Author defines it this way: “The destiny instinct is the idea that innate characteristics determine the destinies of people, countries, religions, or cultures.” The he proceeds to demonstrate that it is not so and neither people nor cultures unchangeable referring to development in Africa, which is, while still being behind the West, nevertheless achieved levels of West in 1970s at least in terms of income levels. The author review fertility rates as one of the clearest examples of how attitudes change with change of income and conditions. So here is his summary:

Factfulness is … recognizing that many things (including people, countries, religions, and cultures) appear to be constant just because the change is happening slowly, and remembering that even small, slow changes gradually add up to big changes. To control the destiny instinct, remember slow change is still change.

This is about failure to diversify sources of information that one uses to form opinions. The point here is that ideas are simple and beautiful, and people tend to use them as abstractions always applicable when in reality everything is messy and complex and blind application of abstract ideas is often harmful. Summary:

Factfulness is … recognizing that a single perspective can limit your imaginationand remembering that it is better to look at problems from many angles to get a more accurate understanding and find practical solutions. To control the single perspective instinct, get a toolbox, not a hammer.

This is about human tendency to blame people and groups for whatever bad happens, without even trying to understand real causality of events. Author looks at multitude of examples, but summary is simple:

Factfulness is … recognizing when a scapegoat is being usedand remembering that blaming an individual often steals the focus from other possible explanations and blocks our ability to prevent similar problems in the future. To control the blame instinct, resist finding a scapegoat.

Here author looks at “Now or Never” attitude that impose urgency and prevents careful analysis of options and actions. As usual author brings a few examples from his experiences in third world countries, summarizing it all in such way:

Factfulness is … recognizing when a decision feels urgent andremembering that it rarely is. To control the urgency instinct, take small steps.

This starts with the true story when author found himself before enraged mob ready to kill doctors on suspicion in evil magic that was causing harm – not unusual for illiterate people everywhere in the world. He claims that ability to think things through based on facts on the part of one authoritative woman in the mob prevented lynching and saved his life. At the end author provides graphic summary of his ideas: 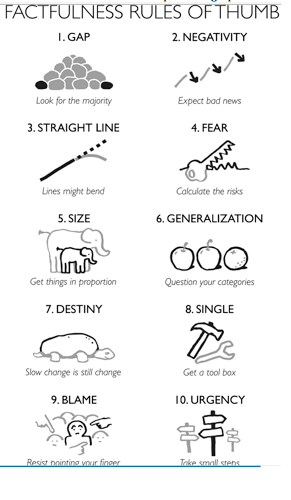 Author’s daughter in law and son wrote the final part describing his death from cancer that he had been fighting when writing this book.

This book is a wonderful example of relatively clear thinking and very clear presentation of ideas. Ideas themselves are not very new and were researched extensively in the last 50 some years by behavioral economists, psychologists, philosophers and what not. It would be obviously useful if people start taking Factfulness into account, but it is not at all clear how to achieve it. It seems to me that author was missing intentionality in facts misrepresentation, which is actually a very serious factor in great many bureaucrats and politicians’ wellbeing. Either the counterfactual believes in God granted status of a king or similarly counterfactual believes in dangerous global warming, there are always people who are depended on these for their livelihood. Correspondingly these people, and they are usually in control of education and mass media, do all they can to prevent every generation from learning skills necessary for using Factfulness either in their ideological position or in their everyday activities. As result people necessarily develop Factfulness approach in their profession and job, often at the steep price of many failures, but they often fail to develop the same in their philosophical and ideological attitudes, resulting in unnecessary long continuation of awful ideas such as socialism.