The main idea of this book is to review history of economic measurements – specifically GDP, discuss its multiple problems, and review new developments such as Internet that makes it more and more meaningless to use old methods of calculating economic activities designed mainly for material production. Author also has an idea to propose a few different methods for measuring economic activities that would be more meaningful than GDP.

The Cult of Growth

The book starts with overall discussion of GDP, how it was created in 1930s and how it became the most important indicator of economic conditions of society. It is also critic of very notion of necessity of growth for prosperity, stressing that infinite growth just plain impossible.  At the end author states a contrarian point of view that growth and prosperity are two different things referring to Japan, which is not really growing for decades, but is a very prosperous country anyway.

Part One: The Problems with Growth

This chapter, after brief discussion of economic history, moves to Simon Kuznets and his invention of GDP, which come around during the WWII as necessary tool to estimate American capacity for production of war material and consequently to build effective military strategy. Author discusses Kuznets’ attempt to leave government out of economic calculation and how it failed under the pressure of Keynesians who believed that government activity should be important part of economy.  Author also discusses another failed attempt to include only “productive activities”, while excluding things like advertisement, gambling, and such.

Chapter 2: The Wages of Sin

Here author jumps directly to our time discussing well-publicized economic case of counting input into British economy by prostitutes. It caused all kind of funny staff related to various calculations of duties, debts, and so on, defined as a share of GDP. Foe example increase of GDP by counting prostitutes’ income would increase Britain duties to NATO defined as 2% of GDP. Similarly changes to GDP formula caused other countries to report quite ridiculous numbers. From here author goes to discuss meaning of GDP vs. GNP and how complex it really is because of multitude of intermediate products and services. Another big issue is that even this numbers are not hard numbers, but rather result of questionnaires, samples, and statistical manipulation.

Chapter 3: The Good, The Bad. And the Invisible

Here author moves to the topic of impact on GDP from various idiosyncrasies of different countries, looking at American Medicare, which inflated payments clearly overstate the numbers. Another important topic is calculation of input from government expenditures. It is quite easy to calculate, for example, inputs into free education such as teacher wages and school building. But is this a real input into economy if government schools produce illiterate graduates? Yet another, somewhat opposite problem, is very valuable input that is not included. As an example, author discusses production of mothers’ milk for baby, which is not counted, but could add billions to economy. These counted/ uncounted / wasted economic artifacts could be discovered in many areas, opening huge opportunities for manipulation.

Chapter 4: Too Much of a Good Thing

This starts with the story of Iceland financial industry prosperity that was followed by crisis.  Author makes the point that financial industry could not bring prosperity and at some point, its input into economy becomes illusory because it is just play of numbers. The new financial instruments that used to generate paper profits do not really serve its main economic purpose of efficient allocation of capital because they based on correct assumption of government intervention that would socialize any losses from failure, while keeping private benefits of success.

Chapter 5: The Internet Stole My GDP

This is an interesting discussion of Internet impact on real economy and on GDP. Basically, for real economy it is great. People get information from home they used to be spending lots of time and effort to obtain. Business thrives on low transaction costs, and improved analytics. However, all this decreases GDP. From this point of view driving in a car to Movie Theater and sitting there watching movie adds a lot to GDP from cost of gas to cost of building to salary of people running Movie Theater. Watching the same movie in comfort of one’s home subtracts all these from GDP, which shows decreased economic activity even if entertainment consumption improved dramatically. Then author compares Internet with multiple inventions of XIX and XX centuries that brought electricity, multitude of machines from home, telecommunications, utilities, and transportation that change lives a lot more then Internet ever could.  At the end of chapter author reviews difficulties of calculating and taxing services comparatively with manufacturing.

This starts with discussion of deterioration of health and life expectancy of average western lower middle class, which has difficulty to handle loss of semi-qualified manufacturing and service jobs and resorts to suicides and opioids despite safety net that provides relatively high level of consumption with plentiful food, merchandising, and practically unlimited entertainment. The most impressive statistics for this is a gap in live expectancy between educated / high income and uneducated / low income Americans, which grew from 5 years in 1970s to 15 years now. From here author moves to the growing inequality, which he blames for many of presented ills.

This chapter is about alternative evaluation of economic activity. It starts with estimates of artificial lights intensity at night. Then author discusses difficulties of estimating it in poor and corrupt countries where lots of economic activity is hidden. Detailed studies estimating economic output of one product, for example milk demonstrate huge variance from official data up to 20 times. Author discusses details of this in several African countries.

Here author moves to discuss countries that made significant progress such as South Korea and India. Author makes the point that even if this book is about GDP and growth being often misleading and poor indicator of wellbeing, the poor countries are really benefiting from growth and should be evaluated differently from the rich ones. Author also discusses ideological struggle about economy in India and work of Hans Rosling.

This starts with discussion of environmental impact of growth on China. He states that China embraced GDP growth as main objective and directed main efforts to it, all other considerations pushed aside. Here there is an interesting discussion of how Chinese economists calculate its GDP, making it into whatever if should be according to party decisions. However, a lot of this growth is real and environmental and human costs are real as well, causing increasing resistance to single minded industrial development.

This starts with discussion about wealth, its misleading averages, and difference between income statement and balance sheet each of which give only approximate idea of the wealth of any entity because a lot of wealth comes from knowledge and skills, which not easily converted into monetary units. Similar difficulties occur in calculation of environmental costs.

This starts with reference to Doomsday book – an attempt to count all wealth in Britain in 1086. The author discusses contemporary, even more ridiculous attempt to monetary estimates like 33 trillion for value of the Earth. Author analyses these attempts, but more importantly he presents idea of qualitative rule that “The aggregate level of natural capital should not decline”.

Chapter 12: The Lord of Happiness

This chapter starts with anecdote about stolen head of Jeremy Bentham that was returned for ten pounds in 1975. Author uses it just to move to evaluation of economic value of human happiness and he starts it with Easterlin’s research, linking it with Bentham’s utilitarism.  Moving to contemporary time author briefly discusses happiness by country with usual Scandinavians at the top and Burundi at the bottom then moving to more interesting estimate of events on happiness. The table below demonstrates this approach:

Finally, he refers to Bhutan with its Gross National Happiness, which somehow does not attract people for moving to Bhutan.

This starts with that GDP was turned into a proxy of wellbeing, which it is obviously not. Author discusses the story of Maryland where local authorities come up with “enhanced” Genuine Progress Indicator (GPI) that included all king of subjective measurements: 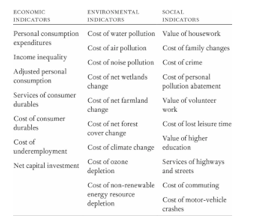 Eventually it completely did not work.

The last part starts with the praise to GDP, which somehow manage to squeeze all human activity in one number. However, author highlights its negative side – it become measure of everything and driver of policy. It has significant problem of garbage in – garbage out, and so on and on. Author’s suggestions for better measurement of economy are:

I think the GDP is an interesting case of invention that begins to live on its own, doing something that its inventors could not possibly anticipate. So GDP instead of tool for resource planning and allocation during wartime became measurement of prosperity or lack thereof, tool for comparison between different countries, benchmark of dues allocation to countries for international organizations, and a lot of other things.

I for one think that it really does not make a lot of sense beyond its original use of allocating material resources to produce war materials. It works for this only because the war is simple – just a few thousands of different types of machines, no need to worry that nobody would buy them no need to think about human tastes and wishes. Even more important, as tool of measurement its necessity implicitly assumes that it would be used by some top managerial authority that can control economy and society overall, which is not a case in free market economy to the extent that it is free and it is market, rather than semi-free and semi-market. As to all other uses, the best comparison between countries would be direction of people’s flow or at least its intentionality. Bhutan well may have 10 times higher levels of “National Happiness” than USA, but somehow people from Bhutan as well as from many other countries trying move to USA, while Americans in their pursuit of happiness do not move in mass to Bhutan. Similarly, payment to international organizations should not be defined by countries GDP, but rather by willingness of citizens of these countries to transfer their earnings to these international organizations. In short, free and market economy does not need the crutches designed for the planned economy of the country at war.