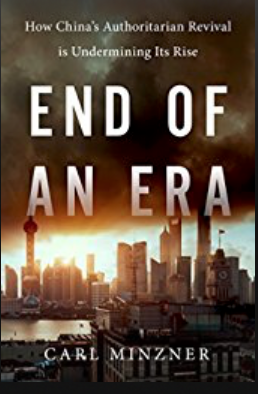 The main idea of this book is that the Era of reform in China ended. The result is advanced economy with authoritarian government, which is, while very impressive from outside, it nevertheless contains huge internal pressures probably not easily controllable by communist party in power. It is not clear what will be next, but it is clear that this “next” will be very different from “now” and probably not very happy.

The introduction starts with reference to Three Gorges dams as symbol of contemporary Chinese society – huge but fragile construct that changed natural flow of things, providing benefits at first but threatening catastrophic consequences in the future if dam breaks. The author’s point is that economic success of Chine hides internal tensions that are moving the country closer to explosion as evidenced by growing unhappiness on social media that from time to time leads to protests and even violence. Author also briefly summarizes content of the chapters that follow.

This chapter starts with discussion of the raise of authoritarianism elsewhere in the world, which is fed by seemingly miraculous success of China model. After that author looks in details of China’s development from late 70s on when Den’s reform opened China to foreign investment and kind of capitalism controlled by communist party. Author makes point that during reforms communist party moved to building institutions for collective control for its rule, including changeable leaders with term limits. It also included expansion of education and bureaucratization of society at the same time opening some space for private business and civil society as long as it was not threatening party’s control. It worked fine for a while, but at the early XXI century system run out of steam due to increase in dissatisfaction of population with corruption, environmental degradation, pressure from the bottom to increase quality of live, especially in provinces, increased unhappiness of western companies with illegal technology transfers, and slowdown of economy. The response, so far was concentration of power at the top, removal of restrictions on personal rule, massive stimulus of economy, and complains against corruption of intraparty competitors. Also revived was ideological push, this time in the form of Chinese Dream and great leader Xi’s writings. Author characterizes all this as the beginning of counter reform era.

2.Society and Economy: The Closing of the Chinese Dream

Here author looks on Chinese Dream development. First it was Imperial Dream – meritocratic raise through education and exams going back to the 900-1000 AD. The raise mainly meant high place in Imperial bureaucracy. It lasted until 1911 when resulting relative military and economic degradation led to revolution and fall of Qing dynasty. The following up power play practically lasted until reforms end of 1970 and included wars, interventions, and such ideology-made disasters as cultural revolution. The reform somewhat restored road to success via education, albeit restricted for provincials by hukou (individual’s assignment to locality), causing mass illegal migration to cities. Also, huge increase in number of college graduates put a lot of pressure on society because it produced entitled intellectuals with not enough place in bureaucracy and lack of marketable skills. Another point author makes is growing differentiation between educated elite and educated non-elite that undermines meritocracy when inequality is growing: 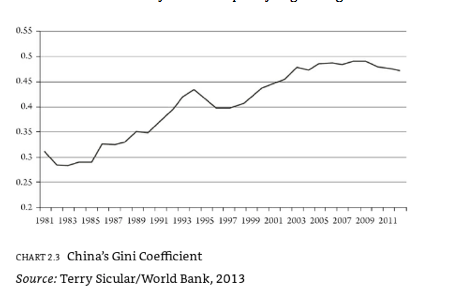 The inequality during reform period was aliviated by opportunities in private business, but party response to slowdown of economy decresed these opportunities leading to frustration and sometimes to violent outbursts. At the end of chapter author discusses XI’s Chinese Dream of innovation society and hope to supplunt USA as preeminent source of new technology rather than cheap labor, but author is sceptical that it would be possible.

Here author suggests that China’s resent success was linked to “Partial political institutionalization”, meaning somewhat stable norms of party’s bureaucratic machine. However, it did not go anywhere close to establishment of at least somewhat democratic institutions and all attempt to their establishment like local election or independent courts eventually failed when bumping into supremacy of one party rule. Consequently, attempts of technocratic organization turned into mass corruption problem as it is supposed to according to theoretical agent-principal problem. Author looks at recent history and, interestingly enough, points to Mao’s Cultural Revolution as attempt to solve this problem by mass removal of corrupt bureaucrats. After Mao initial development of institutions stopped in 1989 when it clashed with communist party controls. After tracing the failure of institutional development author moves to increased tensions in Chinese society linked to conditions of migrant workers and labor over all. It is represented by the growth for legal and labor disputes: 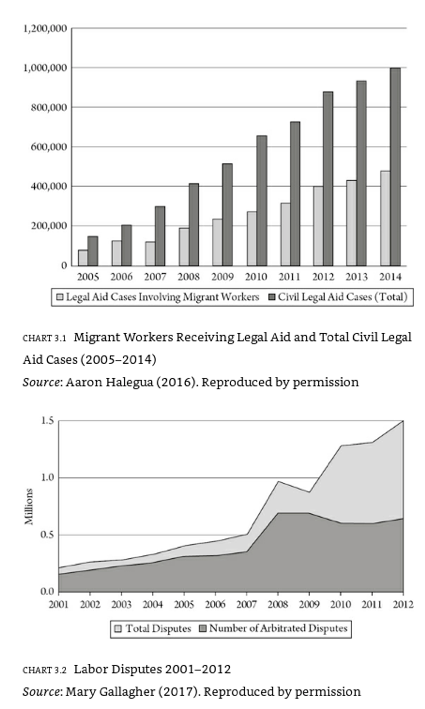 The situation become quite dangerous, stressing and undermining bureaucratic and technocratic cohesion that mainly maintained over the period of reform. Eventually, now it looks as the solution the party leaders came up with is mainly return to upgraded to contemporary conditions Mao’s practices with the new leader XI esteblishing himself as the leader for live and significant number of top level party oficials purged via anti-corraption compain.

4.Religion and Ideology: What Do We Believe?

This is about religion in China, which is, as in all formerly communist countries, a mess. China is still communist country, but official communist religion of atheism mainly become meaningless so both top and bottom of society are looking for something else. There is an attempt to go back to Confucian teachings, but it is not that forceful yet. Author provides estimate for religious affiliation: 300 mil folk religions, 250 mil Buddhists, 68 mil Christians, and 25 mil Muslims. Author reviews religious history, stressing that government usually selected one and suppressed others. Communist party did the same, but its official religion – communism become quite hollow, opening space for others. Party’s attitude represents wide variety mainly of neglect, but sometimes strong, even violent response when popularity of some believes system becomes too big, creating potential competition. Author discusses in details Falun Gong as one example of this. Overall party is looking for some effective substitute for dead Marxism, which would support its current nationalistic direction.

It starts with reference to Americans inability to understand that people in other countries often do not have real experience of democracy and often used democracy-like institutions such as election, formal division of power, and independent judiciary only for show without investing them with meaning and real power. Author in depth discusses some Asian countries like Taiwan transfer to democracy, only to demonstrate huge difference between circumstances of these countries and China, which are so much different that their example is not applicable.

The last chapter is about different versions of future that author foresees:

At the end author analyses what would be meaning of this for the world and how USA could respond.

In conclusion author makes a valid point that society’s governmental system is highly dependent on overall culture. So, in America democracy does not start at the top, it starts at the level of individual experience – high school elections, PTA meetings, and infinite number of events of collective decision-making and elections of individuals into position of power, however small or big power it is. These institutions are foundation of democracy and China’s reforms failed to develop such institution. Author compares result of this failure with Three Gorges Dam and expresses fear that the big earthquake is coming. On the bright side he offers, as an alternative, example of another project – Dujiangyan irrigation system built around 256 BC, which successfully merged with environment regulating water flow without dams, regulating water flow by the using topography enhanced my multiple channels. Author ends stating that it is up to Chinese to decide which way to go.

I think that it is correct that the era of reform ended, but it is not actually Chinese decision or even purely Chinese development. This Era is ending because it was based on integration of China into Western capitalist world as provider of low cost labor and environmentally indifferent manufacturing network. As such it was built on the number of historically abnormal circumstances:

All above is not valid anymore Instead new factors are playing increasing role:

In short China will probably have a few tough years and only decisive behavior of Western powers – mainly USA, could prevent catastrophic unwinding of current global system, which is quickly becoming become unsustainable.