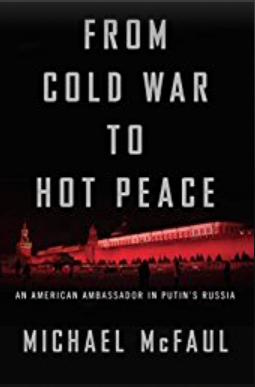 The main idea of this somewhat biographical book is to present resent history of Russia and Russian-American relations via the prism of initially young and idealistic American supporter of democracy in love with Russian culture and people who actively participated in Russian democratization after the fall of Soviet Union, who later become diplomat and eventually American Ambassador to Russia at the time when this country was in process of transfer from temporary democratic aberration to normal for Russia authoritarian rule. One of the most important objectives of the book is to justify actions of Obama administration in relation to Russia and demonstrate that these actions had no bearing on negative developments in this country.

Here author narrates his story as an American who was born right after Caribbean crises of 1962. He grew up during Cold War, being indoctrinated into leftist politics and scared of Reagan. All this caused him to develop deep interest in Soviet Union, learn Russian, study International relations, and enroll in language program in Leningrad in 1983. In Leningrad author found Soviet Union neither scary nor oppressive, obviously it was true for American student in love with Russia. He came back in 1985, this time to Moscow to spend a semester there, somewhat losing his excitement about Soviet System and learning to recognize, at least somewhat, depravity of real socialism. This followed by description of the next few years of Gorbachev when Soviet system was falling apart while author worked on his PhD dissertation. The diminished political power of Communist party signaled coming of revolution and opened space for various democratic NGOs. Author could not stay away, so he moved to Russia and become an active participant of one such organization – NDI organizing meeting, supporting other logistics, and interacting with wide variety of people all this time being on Fulbright fellowship. In process he got into sights of KGB as probable American intelligence officer.

Just 2 months after completion of author’s fellowship in 1991 Communists tried coup and failed, opening gates for wholesale change not only in the political system in Russia, but also for complete dissolution of the Soviet Union.

At this point in 1994 author moved to Russia with his wife and joined Carnegie Moscow Center, actively participating in political discussions with various political players, promoting democracy in mass media, and supporting Yeltsin and his administration through elections of 1996. After this the gap appeared and start growing between USA and Russia initially in international relations: former Soviet East European allies joining NATO, conflict in Serbia, and war in Chechenia. The final blow was Russian economic collapse of 1998 leaving Yeltsin’s regime in shambles and forcing peaceful and barely noticeable transfer of power to KGB forces represented by Putin.

Here author discusses Putin’s strategy of semi-restoration of whatever left of the former Soviet Union that included creative recombination of old Soviet power structures slightly repainted such as KGB renamed into FSB, formal retention of the new democratic institutions like political parties and non-governmental media, while making impossible for media to remain independent or for other parties really compete for political power. Even symbolic things were reshuffled into combination of new and old such as return to the old Stalinist era Soviet anthem from 1940s with the 4threwriting of its words. Also, very important was Putin’s deepening of market reforms in economy, albeit with retention and increase of top-level government control and forceful suppression of oligarchs who potentially could become base of competing political power. Author also describes USA-Russian relations of the period that moved from Putin’s sincere help on 9/11 at the beginning of decade to his anti-American speech in Munich in 2007. Author also refers to his writings about Russian affairs that caused protest from Russian Embassy and, as author believes, make him an enemy to Putin. However, the chapter ends with Putin formally complying with constitution and ceding kind of supervised presidency to Medvedev, while moving into less visible position of prime minister and retaining real power.

The continuation narrates an attempt to actually implement this policy and achieve these objectives. Mainly it is about interplay between Obama’s diplomacy, Medvedev and Putin. Medvedev was Putin’s placeholder when Putin in compliance with constitution stepped down from his position as president. It pretty much comes down to good cop/bad cop game, which was somewhat successful for Putin since he got pretty much what he wanted.

This is about arms control treaty that was left over from Soviet/American improvement of relation in Reagan / Gorbachev era. Obama’s objective was officially: the world without nuclear weapons, but per author’s description there were significant problems from Russian side who sincerely supported Obama’s intention as long it was limited to American weapons and were very reluctant to decrease any Russian weapons and even pore reluctant to allow onsite inspections.  Per author narrative it looks like main barrier to extreme decrease in American weapons was outside Obama’s administration – Pentagon and Senate. It is also interesting how they achieved ratification by the Senate.

This chapter about Obama’s outreach to Iran has a bit misleading header. In reality it is more about strenuous effort to help theocratic regime to survive and assure international support for its legitimation. It includes lots of interaction with Russia in effort to increase sanction in order to convince mullahs that it would be better for them to follow Obama’s path of low-key acquisition of bomb with international help, but without much of blustering.

This is about difficulties of working with countries – former Soviet satellites convincing them that accommodation to Russia and Iran are in their interests.

This is about Obama’s meeting with Medvedev in 2010, which was seemingly successful, but then was negated by discovery of Russian illegal spies network in USA.

This chapter is interesting by author description of Obama’s administration approach to Arab Spring. They were pretty happy to see secular dictators like Mubarak and Kaddafi overthrown and substituted by representatives of Islamic movement. Interestingly enough it led to public disagreement between Putin and Medvedev with former expressing strong unhappiness about pushing out these dictators, while Medvedev demonstrating willingness to follow Obama to support “democratic” empowerment of Islamists.

The final chapter of this part describes process of author’s becoming American Ambassador to Russia just when Reset policy start moving to dust been of history. It happened after Medvedev, despite making some weak noises about running for the second term, opened road for Putin’s return to formal power.

This part is about author’s tenure as USA ambassador to Russia at the time when Putin came back as president and decided that it would be beneficial for him to use America as symbolic enemy. Author describes how demonstrations against voting irregularity impacted Putin and his regime. This follows by description of harassment and use of link to American Embassy to accuse people in treason against Russia and in being American agents. There is somewhat interesting part of people that author knew during his activities in 90s as democrats that slowly, but reliably become Putin’s apparatchiks, executing very undemocratic policies against others.

This is just a set of pictures relevant to author’s story.

This is more detailed narrative of multiple cases of harassment against author, his family and other Americans in Russia by Putin forces.

Here author is trying to present Obama’s administration response to Russian hostilities in many areas, but it really sounds funny, especially when author characterized as most important pushback attempts to remind Russians about good old times of reset and win-win relationships. Overall it was somewhat meaningless propagandist mini war.

This is description of author’s seemingly successful attempt to use twitter to communicate directly with Russian public.

This is description of various failed attempts to maintain meaningful relations with Russia and several areas: arms control, business, human rights, and internationally, especially on Middle East.  Author pays special attention to the story with Syria, trying present in the best light Obama’s actions or inactions.

By summer of 2013 author and his family run out of power and decided that enough is enough. This chapter describes process of resignation and disengagement from Russia and people there.

This is about events occurring after author’s return home when US-Russian relations completely nosedived with Ukraine revolution against Russia propped forces, Putin’s annexation of Crimea, and little war against that country. All this caused implementation of sanctions against Russia and put it in the most hostile position against USA since the end of Soviet Union.

This is a typical dribble of Obama’s official against Trump, mainly repeating standard democratic narrative and demonstrating only that author has no clue about what Trump and his movement is, what they are trying to do, and why they actually quite successful in doing it.

It is a nice narrative of leftist’s travel from enchantment with Soviet union from afar, deep disappointment of close encounter, euphoria of semi-revolution or, more precisely, falling apart under the weight of corruption and dysfunctionality of the real socialist system, period of hope for something new and beautiful, not really fully conscious participation in the Obama’s leftist movement aiming to bring America in the same place where Soviet Union was before, and the first row observation position in the process of Russia going back to its traditional authoritarian roots. It is also a nice example of encounter of typical American academician with practically non-existent real live experience with tough KGB bureaucrat used to dealing with such naïve guys in interrogation room. It does not relate only to the author, who at least did deep diving into Russia for a while, but to the whole Obama team. It would be funny and a nice plot for comedy if not very sad consequences: much more strong and assertive authoritarian Russia, slow moving war in Ukraine, somewhat more energetically moving war in Syria, and reappearance of Russia as military power, albeit without any serious underlying economic power. In short – without Obama Putin would be history and non-authoritarian Russia would probably be much friendlier to USA.