The main idea here is to identify and review the Ideas Industry: the area of activities that author himself belongs to. Author identifies two main types of participants: Public Intellectuals and Thought Leaders, discusses their different variations from loners to superstars, and reviews organizational forms they use such as academia, think tanks, and private entities on social media. However the most important objective of this book is to evaluate impact of their activities on real world,

PART I. Introduction: The Transmogrification

It starts with the statement that marketplace of ideas changed and rather dramatically with advance of technology and change in societal mores. Then it goes to comparison of the two most recent presidents Obama and Trump. Obama is presented as supremely qualified near genius frustrated with poor understanding of his sophisticated actions by foreign affairs community, which undermined his ability to achieve his objectives. Trump in author’s opinion lacks understanding of foreign affairs, acts erratically, and produces highly heterogeneous policy. After demonstrating his deep misunderstanding of both presidents, author moves to generalization of public intellectuals as follows:

His designation for two reviewed presidents: Obama= Public Intellectual and Trump = Thought Leader. Aftrer identifing players, author moves to identifying most prominent trends of the game, which ignite powerful clushes on the market place of ides. These trends are:

Author also discusses the role of ideas and their impact on population, which historically was often underappreciated by intellectuals. However the focus of his attention is development of Ideas Industry created by increase of information and duscissions availability due to Internet, social media, TED, and multitude of other channals that opened access to these forums to masses of lay people.

1.Do Ideas Even Matter?

This chapter is an attempt to make case why ideas matter in the first place. It starts with a charming example of how Jeffrey Sachs’ trivial ideas of ending poverty in the third world by pumping money into the hands of leaders of its leaders led to massive waste of money with no results to show for this. Then author moves to review counter arguments that basically state that ideas and discussions does not matter. He identifies four types of such ideas value discounting arguments:

Author reviews each argument in details without fully supporting or rejecting any of them, but rather while partially accepting some of their logic, nevertheless concluding that ideas do matter a lot after all.

2.How Pessimists, Partisans, and Plutocrats Are Changing the Marketplace of Ideas

This chapter looks at trends above that author consider to be systematic forces, which are shaping Ideas Industry. It starts with discussion about foreign policy experts’ outburst against simplification and popularization of ideas via books like “Black Swan” and the whole phenomenon of online discussions and presentations like TED. After that author moves to trace in details 3 trends that drive this Ideas Industry and its mass production branch: popularization. Here author provides some polling data to support reality of these trends:

Loss of trust in Institutions:

This part looks at the people who are main suppliers of ideas and industries that provide resources to these people such as academia, think tanks, and various publications / websites.

3.The Standard Indictment Against the Academy.

The oldest and most traditional sources of ideas are Universities and Academics discussed in this chapter. Author points to the notion promoted by journalists that academics do not participate enough in public market of ideas because they are too busy writing for peers due to the academic life’s imperative: “Publish or perish”. Interestingly enough a generation ago academics were the only one group who actively participated in this market, while population at large would receive second hand transfer of ideas via political process. Author specifically looks at foreign policy discussions and points out that academics activity decreased with the end of Cold, which caused dramatic decrease of money flowing to academia to analyze and produce ideas relevant to it. Terrorist attacks somewhat revived it, but incentives participate are still by far below historical levels. Another issue is closeness of academic literature due to publisher’s fear to loose lucrative source of income by diluting information into much cheaper popular distributors. Nevertheless author points to a number of such ideas distributors that become popular. However it is not only and even not the most important issue that troubles author. More important is the fact that politicians are not paying as much attention to academics’ work as they believe it deserves. After relatively long discussion on career and other reasons of decreased participation of academics, author hits on one very important reason: huge and dramatically increasing deviation of academia ideology from ideology of majority of country population and correspondingly politicians that this population elects. Here is a nice graph to demonstrate this deviation:

When Academic’s ideas deviate from ideas and believes of electorate, politicians start having hard time trabsfering public resources to academics, even if politicians themselves are very much in aggreement with academics. At the end author points out that some individual academics did well on marketplace for ideas, but it is become risky for them to go out there.

4.The Disciplines: Why Economics Thrives While Political Science Survives

This is a comparison of two fields most important in public discussion: politics and economics and how much different are attitudes to them with economics being by far more respected and rewarded field. The main point here is that economics gets more money, more prestige, and more support than political science. Author provides a couple of polling graphs to demonstrate that elite’s attitude to economics is significantly more positive: 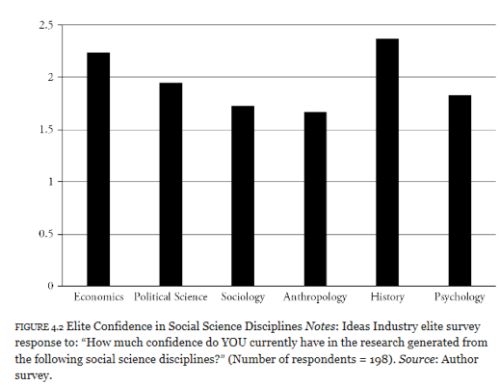 Interestingly enough it is not the result of economics being any more scienifically sound than political science as it is demonstrated by its consistent failure predict results of policies and economic developments. It is rather due to high levels of mathematization economics looks more scientific and elites routinely buy this. Right now political science is trying to follow suit, but it is not clear if it will work out or not.

5.This Is Not Your Father’s Think Tank

Here author looks at think tanks that specialize on conversion of high-level ideas into detailed policy proposals. Author looks in quite a detail at Heritage foundation and changes under DeMint leadership that led its position deterioration. After that author briefly reviews 3 generations of think tanks and their role as source of jobs for middle to low-level politicians out of power and developers of detailed ideologically defined policy plans for their constituency. Author also discusses infliction points in funding, power, and influence of think tanks. The first such point was 9/11 and the second 2008 crash. There is also relatively detailed review of multiple funding sources and dynamics of changes between them. Interesting thing here is that philanthropic support is qualitatively changing with donors getting more and more involved with ideology and direction of think tanks activities, instead of just providing money to professional ideologues.

Here author moves from the area of mainly government financed formal institution nearly completely subjugated by leftists to the area of privately financed think tanks where diversity of ideas is still alive and kicking. The point here is that diverse individuals and corporations in possession of resources obtained from the market place of goods and services are moving into the market place of ideas and use their resources not to support academics, but rather develop and promote their own ideas. Author uses the story of BRICS and debates around them as example of such process. He also points out at interesting result of this movement: development of for-profit think tanks that sell consulting services. Here is graphic representation of relative elite trust to traditional vs. for-profit think tanks:

This part is the review of functioning of market place of ideas.

7.The Promise and Perils of Intellectual Brands

The first chapter of this part is concerned with role of superstar intellectuals who are driving the Ideas Industry. Specifically author looks at history of Walter Lippmann and at contemporary superstars Fareed Zakaria and Neil Ferguson. He also provides a list of 20 most influential intellectuals in foreign policy:

8.Is the Ideas Industry Working?

This is discussion of how effective is Ideas industry and how much it is vulnerable to bubbles similar to bubbles of financial, real estate, and other markets. By working author means improvement in American foreign policy debates. To answer this question author first goes into discussion of idea of disruption from Schumpeter all the way to our days. He looks in quite a detail at work of Clayton Christensen and in main rejects validity of this work. Consequently author uses the story of raise and fall of disruption discourse as sample of Ideas Industry working: an idea gaining popularity, becoming a fad, then falling out of fashion, and eventually remaining as one more source of background noise in continuing discussion with a small cadre of dedicated supporters.

9.Tweeting Ideas: Or, the Requisite Chapter on Social Media

The final chapter looks at interaction between Ideas Industry and online world and how it processes ideas generated by the Industry. Author seems to appreciate influence of new social media, but is clearly unhappy with its idiosyncratic character and complete lack of decorum or even simple decency.

Conclusion: The Dark Knight Theory of the Ideas Industry

In conclusion author states that Ideas Industry grew to be bigger than ever, but he wishes it would be quite a bit better. Author also brings in his our experience as a fledgling intellectual star in foreign policy discussing perks and feeling of self-importance it brings. The final point is that he aspires to achieve sustainability as public intellectual rather then become a burning star.

I did not find a lot of new information in this book, but I do like author’s approach to this area as an industry with everything typically involved in this notion. There is profit seeking motive and not necessarily in monetary form only, albeit this form is very important, but also in form of respect and appreciation from peers and general public. The last is becoming more and more problematic by the minute, mainly because the Idea Industry more often than not fails to produce ideas that find validation in reality and often betrays self-serving character of many public intellectuals. Lately after somewhat dramatic failure in understanding and correspondingly predicting results of American election of 2016 the public trust into Ideas produced by the Industry cratered. I guess, the new Ideas will have to be generated in order to get out of current ideological dead-end that both American main parties encountered. I believe that source of these ideas will be outside of the Ideas Industry, which is way too mature and settled for the real innovation. However, when it will come, the source of these new ideas will probably be able to capture a significant chunk of existing Industry and use it to move to the next step in development of the Great American Experiment.