The main idea of this book is to identify objects, including humans, animals, and everything else conceivable as possessing or not a mind and extent of this possession. For this purpose mind defined as something that belongs to the 2-dimensial space between Agency and Experience with objects that have minds by definition are in the upper right with maximum of both, while everything else being below it either on one or both dimensions. While the bulk of book allocated to discussing place of different objects in this space the final part is more philosophical / psychological / scientific is dedicated to trying to understand individual human mind as complex and dynamic biological and cultural entity.

Chapter 1: WELCOME TO THE CLUB

This starts with the idea that it is not only impossible to know what is on the minds of other people, but it is even impossible to know for sure that such minds exist. From here it goes into the story of serial cannibalistic killer in order to demonstrate that in this killer’s perception minds of other people did not exist and they are actually just things, not minds. From this author moves to Turing and his algorithm for identifying mind vs. computer over the phone and eventually to providing his own graphical mind identifying 2-dimensional space of Agency/Experience:

At the end of the chapter author identifies scope of discussion about mind and different entities that he is reviewing for the indicators of mind or its absence with a chapter dedicated to each entity under investigation.

Animals are obviously the first on the list of candidates for mind club. Author first looks at human perceptions of animals, which is dependent on their speed of movement as presented on the graph:

This follows by discussion about experimentally established animal capabilities in various areas of intellectual processing. The final conclusion is that while animal do have to various degrees both Agency and Experience, the human perception dependes much more on the level of interaction with animals than anything else so dogs are considered smarter than pigs when reality is opposite,

This starts with machines specifically designed to satisfy a very human needs in sex and companionship – RealDolls. The interesting part here is that interaction with machines lead to assigning them qualities that they really do not process such as agency, which often happens when they fail to work properly. A typical example would be a frozen computer that stopped responding to our commands and we immediately assign to it malevolent agency before rebooting. The author’s conclusion is that machines to not belong to mind club because even if they have some agency, they are very low on experience, which could eventually change with further development of AI. Here is a nice graphic representation for this:

This case is an interesting by the very fact of questioning a patient’s belonging to a mind club. After all patients are human so they belong to the club by definition. However the low level of agency that they have, due to being literally vulnerable feelers, pushes them to the left of Agency/Experience space. Author describes a number of experiments demonstrating the difficulty of understanding not only others, but also ourselves. One interesting inference is that obtaining more of the agency either via exerting control over treatment, helping others, or similar activity clearly improves results. This follows by discussion of typecasting in life and in Hollywood and difficulty of overcoming it. Interestingly enough the author builds a moral space around agency as presented on the graph:

This is about dehumanization and/or objectification of enemy and it starts with inversion scenario to test how Americans would feel if American soldier would be treated in such awful way as terrorists are treated in Guantanamo. It follows usual examples of human ability to form competitive group for any small reason or no reason whatsoever, in process assigning negative characteristic to the group of others and positive characteristics to own group. However the most typical reason for enmity is competition for resources. Author looks at it by using examples from animals, experimental research, and historical examples of objectification of others. The typical outcome in terms of this book is mental conversion of other either into unthinking feelers or unfeeling doers. The first group, being savages close to nature, needs benevolent oversight and control such as master / slave relationship. The of the second one are dehumanized as cunning evil doers not susceptible to regular human emotions and concerned only with winning at any cost. At the end author makes an interesting point that common intellectual and emotional experience can decrease enmity and supports it by example of soap operas that tend to decrease hostility to other in people who watch them..

This starts with the story of Terri Schiavo who was in coma, in vegetable state and an object of legal battle whether she should be considered dead since her brain had no activities. From here author discusses connection between consciousness and correspondingly Agency and Experience. Here is diagram of consciousness continuity from none to full based on EEG:

Author also discusses here a variety of human conditions from the inception to incapacity from point of view of who should or should not be included into mind club.

The chapter on a group’s mind starts with description of Indian festival when multitude of people comes to one place for religious reasons, acting as one. From there author goes into formal notion of grouping and Gestalt psychology, linking it to external form of the group when individual members could be practically invisible or undifferentiated from each other. To demonstrate continuity of the group belonging over time author uses Jews as highly connected group membership, which comes with birth and is not easy to denounce, if it is at all possible, due to external perception of its members as unalienable pieces of one entity. After that author discusses psychology of individual in the group and all kinds of intellectual affiliations via ideas such as conspiracy theories leading to deindividualization when one practically adjust own mind to whatever dominates the group. One of typical examples is synchronization from marching bands to monkeying actions of others and joining some collective on Internet. Author also discusses political groups such as countries that have hierarchies and structured processes to make group’s mind on something and enforce compliance of group members with whatever course of action decided. At the end of chapter author states as paradox that individuals in the group generally become less intelligent, but allow achieving huge results from cooperation unachievable by similar number of individuals not joined in a group.

Here author discusses mind of dead or more precisely various ideas about it developed by humanity from believes in hosts and Descartes’ duality to contemporary frozen bodies, Duplication problems in Star Track transporter, or existence within the Matrix. Nevertheless author seems to consider dead to be crypto-minds low on both Agency and Experience.

The next mind is actually a super mind of God. This chapter includes requisite discussion of Pascal ledger and human proclivity to see agency everywhere whether it exists or not with usual reference to prehistoric times when lion may or may not be in the bushes, but one is by far better off by believing it is there. One interesting proposition here is link between sufferings and believes. Author provide a graph to demonstrate this link: 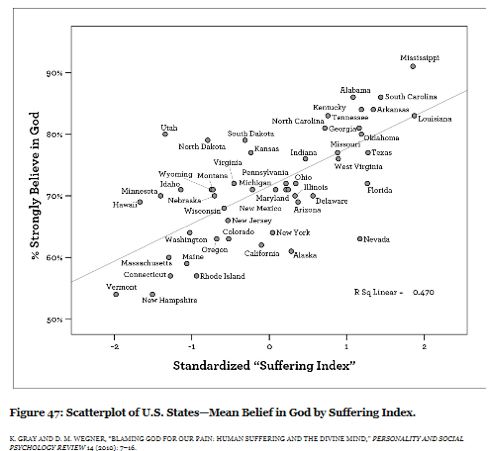 Eventually author places God on this mind map at the very bottom of Experience and at the top of Agency and since we have no really reliable communication lines with God, his mind is mainly the product of nothing more than human perception.

The chapter on human individual’s mind starts with an example of a person who in his sleep was not able to control his actions and committed a murder. This case used to demonstrate that we are not really in control of our mind and do not really understand its working. It follows by description of a number of experiments demonstrating somewhat independent work of subconscious and raises question of free will existence based on famous experiments demonstrating activation of body for moving before actual decision to move had been made. After that author moves to discussion about using new knowledge about mind’s workings to improve human conditions. It goes at the two levels – psychological method to prevent people from desperation when they understand complexity of mind’s working and the second level practical methods to apply in their everyday lives to achieve success such as Commitment Clubs, Implementation intentions technics, and such. At the end of chapter author discusses philosophical aspects of what the self actually is, what part of it is memory, how thoughts are generated and, probably most important, fluidity of self and its susceptibility to change including false and placed memory, self-perception and such. The final point is refer to Dennett and his definition of self as the center of gravity around which orbit all our desires, memories, hopes, believes, and everything else.

Generally I find an idea of mind as topological point of Agency /Experience plane very interesting and I think it deserves consideration and probably expansion into multidimensional space by breaking Experience down into such dimensions as culturally programmable experience vs. random occurring environmental experience and Agency into Consciously directed Agency vs. Subconsciously directed Agency. I would also have problem with idea of a Group, Dead, and God being included into discussion of mind. In mine opinion the mind is a function of acting entity, while all above are not such entities: God does not communicate his existence in any clearly recognizable way, the dead do not act or communicate, neither does group since any of its actions or communication are always vector combination of actions and communications of its members. I guess eventually this approach could be used in modeling AI and potentially providing better understanding of the mind.