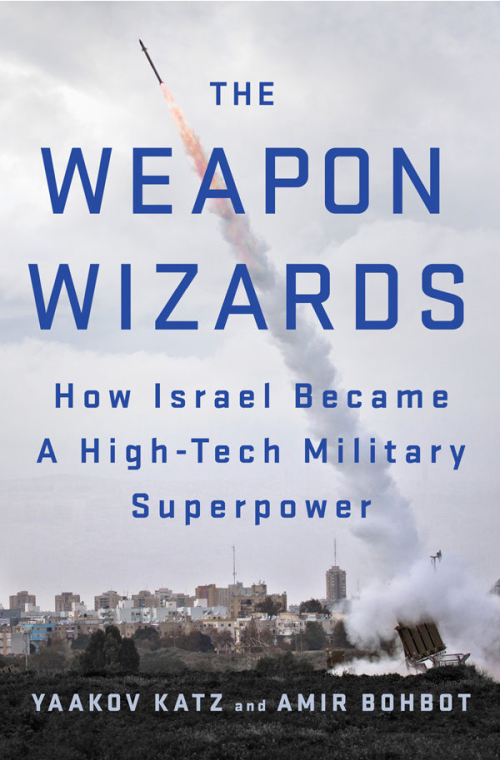 This book is about very unusual circumstances of Israel – the small country under continuing thread of annihilation with population culturally primed for educational and intellectual achievement. The main idea of this book is to review history of Israeli achievements in military technology and how it was done.

The introduction is mainly about Israel culture of survival among multiple hostile nations and populations that used any methods conceivable from massive conventional attacks to individual stabbings to annihilate Israel and its Jewish population. Simply put without superior weapons and tactical superiority Israel would cease to exist and its population would become victims of the new Holocaust.

This is history of the birth of Jewish military industry in the British controlled Palestine. It starts with the story of underground munitions factory, then moves to the creation of air force and ends with the review of Israeli – French cooperation in 1950s that allowed Israel to be reasonably well armed. The French help ended in 1967 when De Gaulle imposed arms embargo. Luckily for the Jews the new sponsor – USA come to help and up until presidency of Obama remained reliable supporter.

This is story of creation of military drones and of Israel becoming by far the most effective producer and seller of this form of armament. It is a good example of success of enterprising individuals in fight against bureaucratic state. Obviously this advantage would not stay forever and everybody now has and uses drones including terrorists.

This chapter is about another important weapon that Israel seems to be good at producing – tanks. Israeli constantly in contest with the latest anti-tank weapons that Soviets and now Russians supply to Hamas and Hezbollah. This contest produced multiple improvements in tanks design with very important new addition – active protection against projectiles.

This is about another technology that would normally be out of reach for small country – satellites. Driven by unreliability of support from even the friendliest country – USA, Israel managed to develop technology and by the end of 1980s become one of a few countries with military abilities in the near orbit space.

This header is a bit misleading because it is not that much about rockets as about stopping them from coming. The rockets here are Hamas and Hezbollah rockets trying to hit Israelis. Eventually Israelis responded with anti missile system Iron Dome, which main achievement is automated tracking system capable identify incoming projectile, its direction, level of threat it posses, and shoot it down if and only if it is the real threat.

This is about Israel incessant fighting with terrorist organizations and the strategy of choice that Israel uses – targeting killing of leaders, while minimizing damage to everybody else. A good chunk of the chapter describes how Israeli military evolved tactics to scare off voluntary human shields by using first low charge ammunition before actually bombing military facilities protected by civilians.

This is about Israel proficiency in cyber warfare demonstrated by Stuxnet virus that slowed down Iranian nuclear program. Another example was bombing well-defended Syrian reactor that required highly coordinated and eventually effective actions of intelligence, cyber measures, commandos, and air force.

The final chapter is about Israel use of its proficiency in weaponry for economic and diplomatic purposes. It looks in details at one such case: attempted sale of Israeli military system to China and how it was stopped when USA expressed its opposition.

Conclusion: Armageddon and the Future of Weapons

The conclusion of this book is quite obvious: Israel will continue attempts to stay at the top of military technology because it is constantly under attack and any negligence leads to immediate punishment in form of successful operation by enemy. The latest example during recent Gaza war is unexpectedly massive and somewhat effective use of tunnels by Hamas. Authors end this book by stressing the high value of education embedded in Israel culture, which gives them hope that Israel will continue to be successful in the future.

I am not that optimistic about future of Israel if it will not change it approach in very significant way. Israel is good at technology and the next generation of warfare with massive use of autonomous and semi-autonomous system is already here in form of Iron Dome and some other systems that are under development in Israel, so at this point Israel probably not in such a bad shape. However strife to annihilate Israel and its people is continuing and if your enemy can lose infinite number of times and easily recover with help provided by the “world community”, but your loosing once means end of game, then someday this “one in a thousands” case will occur and you cease to exists. The only way out for Israel is to win the war once and for all so it’s Muslim neighbors fully accept reality of Israel existence and stop trying. The only way it could happen is if they really and truly believe that the stakes for them are the same – loosing means annihilation. I afraid that we’ll see the end of game coming in the next 20-30 years when Iran and maybe even some non-state terrorist organization acquire the nuclear weapons and try to use them.