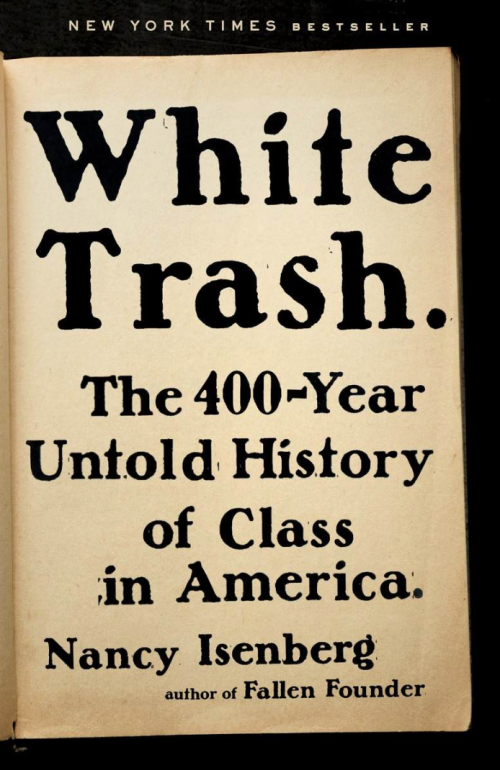 The main idea of this book is to reject notion that America is the land of equal opportunity where all men are created equal and if they fail to achieve prosperity it is their own fault. In order to achieve this author provides quite detailed history of American white poor and contemptuous cultural attitudes to them from elite and middle class. Another key point here that this is not going away and so called “white trash” will stay with us for a very long time in the future.

Introduction: Fables We Forget by

Here author mainly discusses fables of “all men are created equal” and/or “America the best hope”. She stresses that poverty and underclass are always were part of America, from the very beginning of colonization and it never really went away even in the “golden” age of 1950s. She points out that America always was and still is not only “land of opportunity”, but also a damping ground for people not wanted in other places. This book is mainly about them.

Part I: To Begin the World Anew

Chapter ONE: Taking Out the Trash: Waste People in the New World

This is about original shipping of waste people to America. It starts with reference to Richard Hakluyt (1552-1616) who wrote about America as mainly wasteland that presents plentiful opportunity to ship there waste people who may or may not improve it under semi military regime and eventually could provide a pool of soldiers and sailors who are not connected to anything. This vision was tried at Jamestown, but not very successfully. Mayflower puritans did a bit better by establishing something like theologically controlled society. In all cases the new colonies were pretty class-conscious society with strict enforcement of who is who.

This chapter moves to ideological underpinning of the new America obtained by colonists from John Locke in XVII century. She discusses his participation in creation of illiberal Fundamental Constitution for Carolina colonies that indorsed slavery and rigid hierarchical society. Practically it was beginning of long war against poor settlers and squatters. Author allocates quite a bit of space to Dismal Swamp that came to symbolize America as a wasteland that requires spending lives of multitude of poor people to achieve at least some improvement. Somewhat different was development in Georgia, which practically started with James Oglethorpe’s colony established in 1732. Here slavery was initially rejected and classic agrarian society consisting of citizen – farmers – soldiers was attempted. However even here unequal classes were quickly established. About 10 years after the first governor left, the slavery was allowed and Georgia moved in the same direction as other parts of the South.

This starts with Ben Franklin, more specifically with his approach to demographic of poor who produced children regardless of means to support them. However in country like America at the time with unlimited pool of land additional children were the same as additional wealth for the society providing they are productive. In Franklin’s view the new Americans would eventually substitute slaves and indentured servants. However it did not work this way and author goes into discussion of why no self-made man is really self-made and nobody could be productive without at least some human capital transferred via family and upbringing. Author also brings in views of Thomas Paine who, while being clearly class conscious, nevertheless believed that idleness could be eliminated by independence, which together with access to natural resources would dilute class differences between Americans.

This is continuation of review of founding fathers approach; this time it is Thomas Jefferson. His ideas of agrarian society of farmers without class distinction however required proper topography good for agriculture so places like Dismal Swamp could not help but produce poor, lazy, and good for nothing people. He still left some space for classes with at least some aristocracy at the top, albeit not heritable, but rather meritocratic.

The final chapter of this part is about Andrew Jackson and his fight against East coast Elite, which become quite well settled and powerful during the first 50 years after revolution. Big part of it was not only fight against the Bank, but also squatters against landlords and westerners against East based government. Since squatters had no titles to the land and moved from place to place under pressure they become the lowest class of the period associated with multiple evil characteristics. Jackson was not really their supporter, but he was expansionist and new land inevitably provided opportunities for these people. Eventually by 1840 despised squatter turned into freedom loving westerner supported by all sides of political divide.

This chapter moves to the next period when the main issue was slavery, but secondary and also very important was issue of poor southern whites spoiled by negative attitude to labor. At this point the issue of biology as defining factor of behavior started to become important and blood, especially mixed blood begin define attitude to people. It was at this point when notion of “white trash” was created.

This is somewhat unusual look at the Civil war as class struggle. The classes in it were Southern aristocratic land and slaveholders with support of southern whites on one hand and Northern business elite with support of farmers and other middle class members who were threatened by emerging aristocracy.

Chapter EIGHT: Thoroughbreds and Scalawags: Bloodlines and Bastard Stock in the Age of Eugenics

This chapter is about Darwinian approach to poor and Eugenics movement that was based on practically agricultural approach to humans as just another group of domestic animals that could and should be bred to improve quality of stock. It discusses Du Bois who was trying to advance black development pointing out at the same time degeneracy of poor Southern whites and danger of rednecks. The author looks here on post Civil war South population including Northern whites that moved south and tried to benefit from reconstruction (skalawags). In addition to Du Bois author looks at Teddy Roosevelt, another enemy of rednecks. Teddy was eugenicist and supported political measures consistent with better breeding ideas. Author also covers multiple violation of human rights caused by supporters of these ideas.

This covers great depression, which dramatically increased share of poor in population at the expense of part of middle class that failed to survive economically. Probably this sudden increase in number and quality of poor population is not that bad explanation of serious movement of political power to support their needs. After all American democracy allows people smart enough to vote and numerous enough to win majority put into power somebody who would help them, even if it would happen at the expense of others, which what New Deal was all about.

The post WWII history reviewed here brought in the new phenomenon – popularity of poor southern white culture and its representatives like Elvis and Andy. It was greatly enhanced in TV culture by representing it in relatively positive, albeit slightly intellectually challenged, view, while pushed down and suppressed in its racist expressions. It also touched on Johnson’s great society that was aiming eliminate poverty by giving out handouts, rather than eliminating poor by breeding them out of population.

The next step in history of American poor whites are 70s and 80s when they were on the roll first surviving stagflation and their own Jimmy Carter, then nearly taking over the whole country with evangelical revival and extension of pop-culture.

The final chapter brings us to 90s and 2000s when first slick Willie Clinton from democrats and then Sara Palin from republicans seemingly brought the lower classes representatives to the top of political power or close to it. It was obviously false with Clintons who with their top schools lawyering were more pretending then really belonging to this class, but the fact they did it demonstrated growing political power of the bottom and correspondingly decrease in power of elite.

This is pretty much restatement of the main thesis that America is not a classless society, never been and probably will never be one. In author’s opinion America’s classes, as in any other country, are defined by inheritance, wealth, and educations. These are not easily penetrated barriers and lots of people keep staying in their white trash status for many generations in the past without any indication that they will do better in the future.

I find this history of “white trash” quite interesting and educational. However I do not think that it proves that traditional idea of America is wrong. If something it actually demonstrates it is that America is the land of opportunity, albeit it is not easy to convert this opportunity into success. Moreover the history demonstrates quite convincingly that American system of imperfect democracy and generally wide freedoms allows peaceful revolutions via elections when people at the bottom find that opportunities are not as good as they should be. It happened a few time in American history from Andrew Jackson to Donald Trump and even if result is not always what is expected, it still corrects American system in such way that it provides more opportunity than it was the case before revolt.