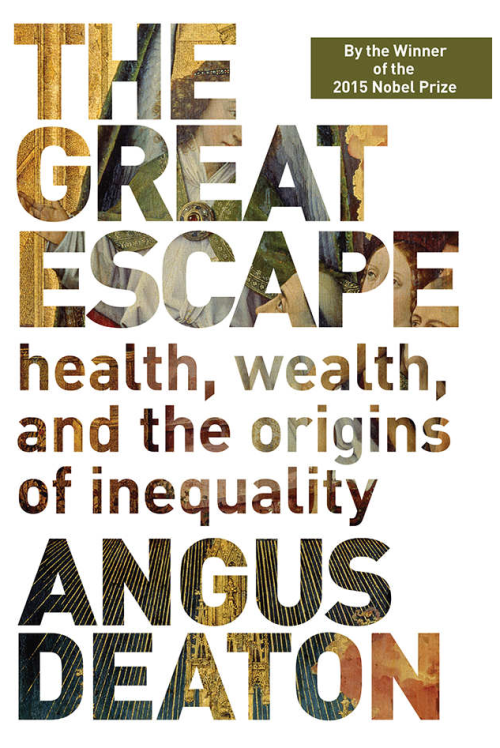 Over the last several hundred years humanity achieved the great breakthrough in its ability to produce necessities for human live on continuously increasing scale and overcame previously deadly health and sanitary problems. There is potential setback for this development due to increasing inequality of income both within countries and between rich and poor countries. There is need to tackle both of these problems that author believes could be done by decreasing inequality and changing the way of how aid provided to developing world.

This book is about humanity’s escape from poverty and deprivation and author starts with movie analogy – escape from captivity in WWII and continue with his and his family story of escaping from poverty, diseases and early death, into contemporary affluence over just a few generations.

Introduction: What This Book Is About

Author’s stated intention is to look at what happened that allowed humanity escape from deprivation and how it is deeply connected to the growth in inequality. It is not only about money and resources, but also about health and general quality of live. A big part of discussion also involves consequences of inequality and general look at link between national income and national happiness.

Author begins the detailed analysis with relations between health and wealth and then looks at correlation between income and live expectancy in different countries. Generally both health and wealth improved in XX century, but with significant interruptions caused by World Wars and socialist experiments in Russia, China, and all over the world. At the end of chapter he looks at relationship between GDP per capita and population perception of happiness with happiness increasing until $3,200, then staying flat until about $15,000, after which it going quite dramatically up again.

PART I LIFE AND DEATH

This is review of historical change in mortality, health and live quality since prehistoric time with special stress on development in USA in XIX and the first half of XX centuries. It is best represented by the graph:

This chapter about mortality, its type and levels as related to income:

This is about health and live expectancy, again in relation to income. Here is an interesting graph for correlation between bio parameters such as height and income: 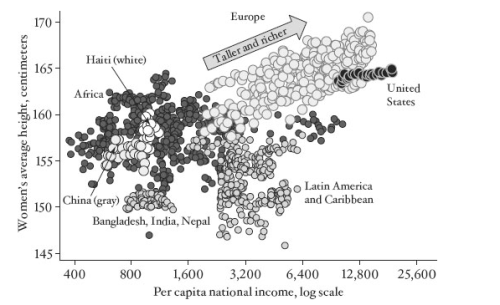 It is a review of economic development of USA, but main point is presented in graph of income inequality historical dependency on political events:

6.Globalization and the Greatest Escape

Here author expands discussion from US to whole world. He notes that recent development allowed huge numbers of people around the world escape poverty and misery. However measurement of exact change is nearly impossible because of wide variety of human needs and demands dependent on culture, climate, and million other things. Correspondingly comparison of economic well being between countries is practically not possible for the same reasons. However, despite lack of reliable measurement, author pretty sure that global income inequality if growing and it creates tension between developed rich countries and the rest of the world.

This part is about western aid to developing world. Despite huge amount of resources spent, it is not particularly effective. More often than not it comes down to western bureaucrats taxing population to transfer wealth to bureaucrats and politicians in developing countries. Author reviews causes of this problem and multiple proposed solution, but does not see any specific way to overcome it.

Postscript: What Comes Next?

The final world is relatively optimistic when author expects that process of improvement will continue, albeit not without setback and in unequal tempo in different times and places.

It is nice to see such well-documented and detailed description of process of improvement in human lives over extended period of time that shows no real indications of stopping or reversing. Information contained in this book confirms my opinion that we are still on the road of improvement, but it is not guarantied that we’ll continue on this road in the future. We still have to achieve more progress in developing world, but the most important improvement should occur in developed world where the quality of live pretty much stopped increasing in the last couple decades, despite dramatic improvement in technology. This stoppage has very little to do with capacities of developed societies to produce goods and services and everything to do with society institutions that define process of resource creation and allocation to individuals. Current processes often leave people unhappy even if they are doing not that bad materially, because humans need movement to the better and these movement is lacking. Moreover there is no such thing as constancy in quality of live so if it is not improving, then it is deteriorating. Normally people are not inclined to tolerate such deterioration, especially when they see other people doing better and better. Consequently we have to change existing processes and institutions to renew improvements in quality of live, that does not necessarily means improvement in availability of material resources exclusively. The alternative to such dramatic improvement, I am afraid could be self-destruction of civilization.