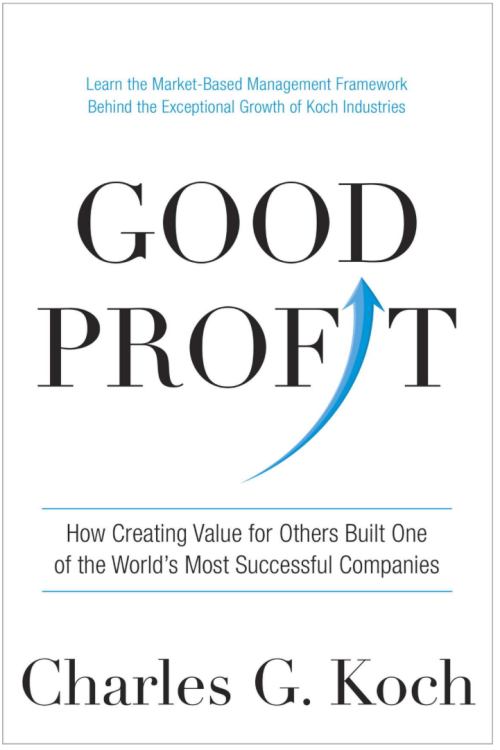 This book is part biography, part managerial philosophy, and part case studies of applications of this philosophy. The key overriding feature of this philosophy is respect for other people and understanding that they always act in their own interest anyway, so after effective selection of people with values and abilities in sync with company needs, the best way to achieve good results is to give these people freedom to decide and act as they see fit, providing that overall results are good and inevitable mistakes done in good faith and are source of analysis and new knowledge. The last, but not least feature of this philosophy is to provide big incentive to act in the interests of company and unlink value of incentives from formal position of individual in the company hierarchy. Practically it is a very interesting approach to deburaucratisation of large-scale organization with resulting huge increase in productivity of business and well being of its participants either owners, employees, or customers.

INTRODUCTION: A Win-Win Philosophy: This chapter describes an essence of the Koch business philosophy, which implementation led to spectacular results. Koch calls it Market Based Management (MBM) and it includes five dimensions: Virtue, Vision and Talents, Knowledge Processes, Decision Rights, and Incentives.

CHAPTER 1: The Glorious Feeling of Accomplishment. Life Lessons from My Father: This is narrative of Koch’s father Fred live with an interesting reference of his experience in Soviet Union that made him live long anticommunist.

CHAPTER 2: Koch After Fred. Building with Stones That Fit: This is story of Koch’s taking business over from his father and initial experiences that help in his development of MBM business philosophy.

CHAPTER 3: Queens, Factory Girls, and Schumpeter. The Incredible (Sometimes Terrifying) Benefits of Creative Destruction: This chapter is a small deviation into general theory of economics mainly expressing Koch’s libertarian approach developed not only from his father’s stories, but also from serious reading and clear-eyed analysis of reality. Here is a nice graph Koch included demonstrating link between economic freedom and prosperity: 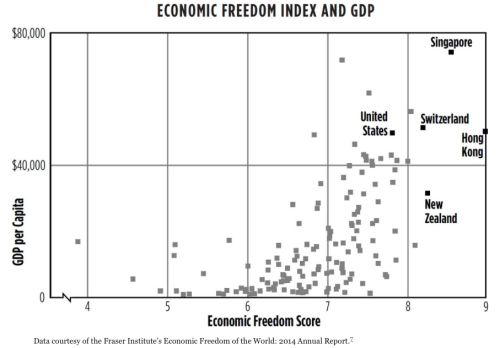 Important thing in this chapter is Koch’s story of being on the wrong side of “Creative destruction”, surviving it, and learning lessons from it.

CHAPTER 4: Overcoming Bureaucracy and Stagnation. Economic Concepts to Set You Free: This is another discussion of economic philosophy as foundation of MBM philosophy and brief story of its implementation at Koch Enterprises.

CHAPTER 5: Learning from Adversity. Koch’s Major Failures in Applying MBM: This chapter is unusual in its concentration on Koch failures during MBM implementation. While brief, it is very useful in understanding of this philosophy and challenges in encounters in real live.

In this part Koch goes into details of his 5 components of MBM using one chapter per each.

CHAPTER 7: Virtue and Talents. Values First: In this chapter Koch makes important point about selection of people. The key here is that integrity and values are more important that talent and credentials. He provides 10 guiding principals for such selection and looks in details at how they applied in practice.

CHAPTER 8: Knowledge Processes. Using information to Produce Results: Koch is clear about his understanding of business as knowledge based activity so he made the Knowledge process an important part of MBM. It includes clearly defined knowledge sharing processes, external networks building, spared use of consultants, and, most important, process of conversion information into results. For sales and pricing he provides a nice diagram, representing core of his analytical framework: 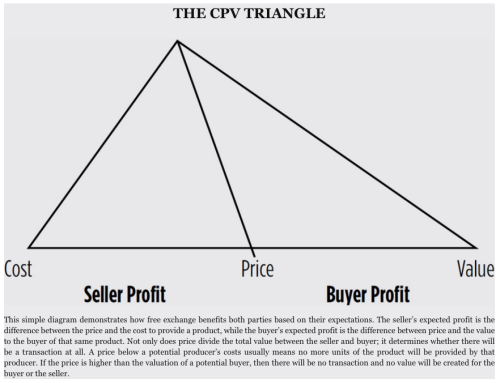 CHAPTER 9: Decision Rights. Property Rights Inside the Organization: This part of MBM is probably the most important and unusual because it represents an attempt to turn Koch’s employees into virtual business owners by assigning clear-cut resources, duties, decision-making authority, and responsibilities to individuals. The result is maximization of individual involvement and effort in achieving result. Obviously it also minimizes tragedy of commons within the company.

CHAPTER 10: Incentives. Motivating the Right Behavior: The final part of MBM has somewhat psychological foundation derived from ideas of Maslow. The point is to use company not only as source of income for employees, but create such strong opportunities for self-actualization within the company that participation in the company business would be a significant source of meaning of live for everybody. The most interesting part of this is how it is done at Koch Enterprises.

CHAPTER 11: Spontaneous Order in Action. Four Case Studies in Market-Based Management: This is review of 4 real live cases with detailed break down into 5 MBM dimensions.

The final chapter is about implementation of MBM, how to succeed in it and what mistakes to avoid.

I am not get excited that often, but it is an exciting book. It is so nice to see somebody clearly formulating business philosophy based on virtual individual ownership within big organization and, much more important, being capable actually implement it in real live with such spectacular results. It is no wonder that Koch incite such open hate in all leftists whose core believe is based on primacy of collective and suppression of individual. Their reason for being is based on idea of higher productivity of the top down command system led by the best and brightest where individuals at the lower levels of hierarchy are not that important, while individual at the bottom are outright expendable. I think that Koch’s demonstration of by far superior business result is much more important reason for this hate, than money Koch gives to libertarian causes. At this point in time despite being in his 80s Koch seems begin to understand that in attacks against him from leftists and their media he encounters not misunderstanding between people who all want prosperity for everybody, but have difference in opinion how achieve it. Quite contrary he and we all should understand that when dealing with leftists we deal with power crazy people whose motivation is to be among best and brightest on the top and enjoy all perks that these positions would bring in top down command and control hierarchical society. We are not in dispute about opinions, but in civil war, even if so far it is non-shooting war, mainly because American culture is still highly individualistic and even libertarian, making leftists relatively week. However if leftists able fully utilize their current dominance in education and mass media, then concentration camps and basements with bullet to head as it was in Soviet Union or Communist China would not be that far away.