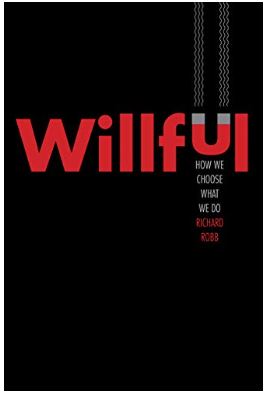 The main idea of this book it to present a different view on human action. Author expands usual assumption that people act rationally, trying to maximize material benefits or emotionally, based on instinctive heuristics, by introducing the new form of motivation for action, that he calls “for self”. Consequently, he supports this idea by reviewing various areas of human behavior that, he believes, are not covered by conventional views of motivation.

PART I Life Is a Mixed Drink
1 Venturing beyond Purposeful Choice
Author starts here by rejecting the idea of exclusively purposeful choice: “Both rational choice and behavioral economics assume that action is purposeful, that people seek the outcomes that best gratify their preexisting desires. People either know their preferences and can describe them out loud, or sense them and act as if they understood what they wanted. The purposeful choice model can explain many things, but not everything. Certain actions are undertaken not for any tangible benefit but for their own sake. They cannot be ranked against, or traded for, other actions. These actions belong to a second realm of behavior that is neither rational nor irrational, but for-itself.”

Then he tells the story of his intellectual development from PhD candidate in Chicago school of economics with strong believe in economic rationality, to financial trading executive discovering joy of doings difficult projects for its own sake, and all the way through wealthy early retirement and post retirement projects when life’s enjoyment is not linked to specific material purposes.

2 Two Realms of Human Behavior
Here author moves to detail his main thesis discussing meaning of “For-Self” motivation and significance of Authenticity. He also reviews relationship between realms of “Purposeful” and “For-Self”, including their interactions and inequality when default is usually set to “Purposeful”. Author also provides graphic representation of his idea:

After that author proceeds to review in details all three parts of  “For-Self” domain, dedicating a Part of the book to each: believes, people, and time.

3 Acting in Character
Here author discusses how people have infinite variety of believes and how they depend on individual character. He refers to philosopher Charles Sanders Peirce to discuss adoption of believes:

After that author move to discuss consequences of acting based on believes, providing 2 interpretations for each one as Purposeful and another For-Self:

At the end of chapter author looks for practical implications in such area as stock picking.

4 Making Money in Financial Markets: Anatomy of a Leap
In this chapter author moves to area of his expertise – Financial Markets and first reviews Efficient Market Hypothesis, then two forms o investing: Institutional and Individual, and finally tells his individual business story with financing big and risky project Thanet.

5 For-itself Decision-Making within a Group
In this brief chapter author once again retells business story, this time with stress on reconciliation of his For-Self decision-making with other people, usually investors. Interestingly enough he even manages to link it to the Bible story of Joseph and Pharaoh.

PART III People
6 Altruism
Here author defines main categories of altruistic behavior and then looks in details at each one of them:

(1) selfish altruism, when an individual appears to subordinate his interests while actually promoting them;

(2) manners and ethics, when an individual observes social norms or adheres to established moral principles;

(3) care altruism, when one person cares directly about the well-being of another;

(4) mercy, when a person performs a sporadic altruistic act that defies rational explanation; and

(5) love altruism, which describes acts that transcend all preferences and do not stand in relation to them.

He also states that: “The purposeful choice model makes room for the first three types of altruism but not the last two.”

7 Public Policy
Author starts this chapter by applying Pareto efficiency to public policy. Then he moves to discuss moral dilemmas, including compulsory trolley problem and monetary value of human life.

PART IV Time
8 Changing Our Minds
This chapter is about choices across time, which includes planning and contradiction between current self that does planning and future self that suppose to implement it. Then author pontificate on planning horizon and discount of the futures.

SUMMING UP Purposeful versus For-itself: A Peace Treaty 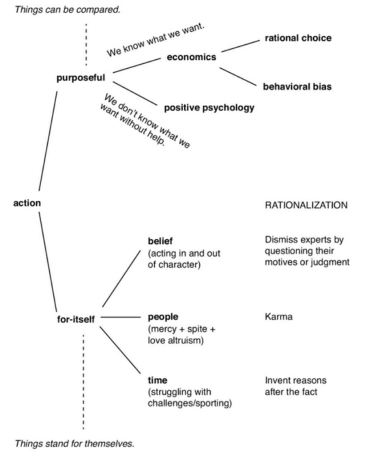 Generally, I am in agreement with author’s point that economics fail to explain human conditions and actions and there is need to go far beyond it to what author calls “for-itself”. However, I believe that it is not possible for human to do anything that could be strictly divided into “purposeful and for-itself”. It is because human is rather complex entity, which is continuously in process of changing condition of need to satisfy multiple, often contradictory needs and wants created by the brain’s evaluation of physical, psychological, and environmental conditions both: existing and preferable. The variance causes action to move from existing to preferable, which is one and only purpose of any action whether it purposeful, selfish, altruistic, or whatever.  I wholeheartedly support all attempt to understand humans, but I am against all attempts to control them as long as they are not violent. My believe is that humans are best off if they are not controllable by others and have resources to achieve whatever they want to achieve.