The main idea of this book is demonstrate that “Little Ice Age” of XVII century had huge impact on human history. The global cooling caused significant decrease in agricultural productivity all over the world and consequently mass starvation in many places. The consequence was an increased fight for survival that included wars, revolutions, and political changes. Author clearly intent to caution everybody about direct link between climate and human affairs, which requires constant preparedness to handle similar crises in the future.

Introduction: The ‘Little Ice Age’ and the ‘General Crisis‘

Here author briefly recount tragedies of XVII century: English Civil War, German 30 years religious war, French Civil war, Russian-Polish-Ukrainian struggle, Ming-Qing dynasty change in China, Mughal empire suffering from the draught, and so on. The only country that got away from this calamity relatively easy was Japan. Author links all this to climate change that had global character and provides nice table summarizing political consequences:

PART I. THE PLACENTA OF THE CRISIS

Here author retells adverse climatic events of the period and then discusses typical response of people highly consistent with the level of civilizational development: the Search for Scapegoats. Author also discusses agricultural productivity, its reliance on climate, and human need in food for survival. With humanity at the time being at the early stages of technological development it was not feasible effectively prevent decrease in food supply, which led to Malthusian solution: massive deaths and decrease in population. The problem was not only death, but also impact on physiological condition of population. As example author provides graph of average height of French males born between 1650 and 1770:

In this chapter author discusses how humanity responded to adversity: mainly by starting massive wars, which despite multiple disguises religious and otherwise, were pretty much straggle for resources. Here is well-documented example from Europe: 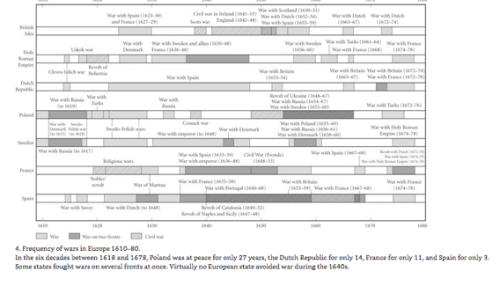 At the second part of chapter author discusses how various absolutist monarchies of the time handled the crisis.

3 ‘Hunger is the greatest enemy’: The Heart of the Crisis

Here author reviews details of agricultural production in several countries and its marginal character. Combined with societal conditions of the time any variance in food production quickly led to variance in population. Author also discusses role of cities as “urban graveyard effect”, which occurred when people failed to live off the land and move to cities in hope to obtain sustenance there. Here is example:

Author reviews this situation in multiple countries and their big cities, concluding that similar circumstances led to similar outcomes.

4 ‘A third of the world has died’: Surviving in the Seventeenth Century

This part is country-by-country detailed history of crisis with all its famines, massacres, revolutions, wars, and tremendous suffering of people all over the world.

13 The Mughals and their Neighbors; 14 Red Flag over Italy; 15 The ‘dark continents’: The Americas, Africa and Australia; 16 Getting it Right: Early Tokugawa Japan

This part continues the history of the crisis, but moves to countries where it was somewhat less severe. It was still pretty bad, just a bit better than extreme cases. However one country: Japan was much more successful in handling it. Author provides a small table demonstrating this success by increase in population and harvests:

Author explains this success by referring to a number of measures that allowed start up Tokugawa dynasty to achieve this result. The most important was what author calls “Industrious Revolution” – massive intensification of agricultural process that allowed increase in productivity and overall output, consequently preventing or at least alleviating severity of famines that caused so many problems in other countries. Another important achievement was Tokugawa’s success in ruling in feudal lords (daimyo) by forcing them to stay close to the center and provide hostages, which made for effective control over their actions.  Not a small part in this success was result of control over information flows, publishing, and religious activities. Author also stresses comparatively beneficial circumstances: Japan at the time was somewhat under populated so climate cooling had a lot less impact than in countries where previous period of population growth and expansion of agriculture to marginal productivity areas created potential for disaster, when harvest failed in these areas.

Then he follows on to discuss rebels breakdown along similar lines in different countries.

17 ‘Those who have no means of support’: The Parameters of Popular Resistance

At the beginning of chapter author provides table for France and graph for China that demonstrate massive increase in revolts during climate crisis:

He provides narrative of such revolts and looks at deterring factors that demonstrated some preventative power:

Author also looks at such details as role of clerics, etiquette of collective violence, place and time of rebellions, weapons and emblems, and, finally, at outcomes: whether it ended in Concession or Repression.

18 ‘People who hope only for a change’: Aristocrats, Intellectuals, Clerics and ‘dirty people of no name’

Here author moves from the bottom to the near top of societies looking at such causes as crisis of Aristocracy, Education, that typically makes it difficult to accept low level station and lack of resources, and finally at people of “no name” who are practically situated outside of main society, but at some condition could invade it – good examples are Russian Cossacks (Stenka Razin) and Chinese pirates (Li Zicheng). Author also discusses in details legal and philosophical justification of Disobedience and violent revolts.

19 ‘People of heterodox beliefs … who will join up with anyone who calls them’: Disseminating Revolution

Here author looks at similarity between development of revolts and contagious diseases: both starting with some spark in local place, but then quickly expands when encountering large numbers of people without immunity and psychologically at the limits of tolerance. Author also discusses situation when fire moves across national borders, exporting revolution. Finally author looks in details on ‘public sphere’ in different countries meaning foundation of literacy, which is always instrumental in promotion of ideas, including revolutionary ideas. A very interesting note at the end of the chapter relates to the number of initial revolutionaries who in nearly all cases is exceedingly small, which is quite consistent with idea of spark causing huge fire.

PART V. BEYOND THE CRISIS

In this part author moves to aftermath of the crisis in late 1680s when despite continuing adverse climate effects well into XVIII century with continuing wars and revolts, wars and revolts decreased in frequency and intensity. Author rejects the idea that it was result of depopulation. He rather stresses human ability to adjust citing evidence of increased crises preparedness, new technological and organizational measures like quarantine that were applied and, most important, shift away from religious thinking to new way – scientific thinking that provided much better ability to handle adversity. The chapters of this part look at all these consequences.

Here author discusses personal reactions of contemporaries and kind of links it to what it would look like now: “ Many of those who lived in the seventeen century reacted to adversity and anxiety which they could neither explain nor avoid in much the same way as their descendants today: some killed themselves; others went to consult a therapist or a cleric; while others found solace in an absorbing pastime. All three categories are difficult to document, because they left few traces in the surviving sources. “
. Author looks at each of these groups
reviewing escapist measures used from emigration to suicide, prevailing psychological mode of melancholy, how it was documented in multiple diaries and other documents and so on. Finally author discusses how it happened that Europe shifted from mass wars to peace as result of general exhaustion.

21 From Warfare State to Welfare State

Here author moves to resilience and recovery starting with notes about Germany that was probably the most devastated part of the continent. Then he reviews similar situation in China and other countries. Finally he reviews multiple technological and economic changes that he characterizes as “Agricultural revolution, Consumer revolution, containment of diseases, advancement and periodic renewal of cities, often after massive fires, and other economic changes that led to increased prosperity.

Here author analyses reason for divergence between Europe and other parts of the world, citing mainly intellectual changes: development of universities, decrease in power of religious thought controls, overall increasing use of scientific method in all areas of life.

In conclusion author discusses who were winners and losers of the crisis, which were somewhat different in different countries generally with peasants and others in lower classes being losers and soldiers and governments being winners.

This stresses human dependency upon climate and discusses in details various occurrences of extreme climate variations. Author laments calm attitude of population to global warming alarmism and presents in details how analysis of London potential floods led to preventive intervention in form of building barrier, which despite being very expensive did prevent massive damages afterword.

It is an interesting history clearly demonstrating human dependency on climate in XVII century when technology was primitive, understanding of environment even more primitive and hate, that was periodically exploding in violence between various nations, religious groups, and classes was just a normal condition of humanity. We now live in different world and current knowledge, scientific method, and technology allows not only much better understanding of climate, but also multitude of measures that could allow handling many a crises in effective way. For example such thing as famine due to cooling, could be easily prevented by shifting agriculture to wormer places, or even moving it to controlled environment, not even accounting for human current ability to modify plants or even produce artificial food. I think that alarmist approach is not supported by demonstrated levels of climate understanding and often driven more by power plays and greed of pseudo scientists who derive lots of money and publicity, than by actually demonstrated problems. In any case, it is typical for people who spend time outside of real business environment attempting to find universal solution for multitude of problems, when in reality problems should be resolved one by one as they clearly present themselves.