The main idea of this book is that current development of scientific thought is more and more conducted based on evolutionary understanding of biological and specifically human development, which is fully applicable to understanding of mental diseases and disorders. Author reviews results of multiple studies of mental and emotional disorders in view of his experience as clinical psychologist and concludes that evolutionary approach does promise to achieve much better understanding of these problems and possibly define good direction for finding fixes.

Here author describes his interest in application of evolutionary biology to explanation of mental diseases. Author is practicing psychiatrist and he is disturbed by slow progress in this area. So he is trying to use the new approach and believes that its fundamentally new perspective could be instrumental in finding solutions.

Part One: Why Are Mental Disorders So Contusing?

Author starts with description of one of cases he had treated when patient claimed that she cannot get consistent explanation of reasons for her problems and 4 different medical professionals provided different recommendations. This led author to understanding that psychiatry is quite confused. After that he discusses difficulties of mental diseases diagnosis and story of DSM from 1 to 5. He discusses relation between process of evolution functioning of human brain and refers to Tinbergen’s 4 questions:

Author also adds another question: “Why did natural selection leave our bodies with traits that make us vulnerable to disease?”

Here author continues discussion of diagnosis and posits question about nature of mental disorders. He looks at development of sequential DSMs in search of truly scientific definition but could not be satisfied with this. Here is how he defines the problem: “The core problem for psychiatric diagnosis is the lack of a perspective on normal useful functions that physiology provides for the rest of medicine. Internal medicine doctors know the functions of the kidneys. They don’t confuse protective defenses such as cough and pain with diseases such as pneumonia and cancer. Psychiatrists lack a similar framework for the utility of stress, sleep, anxiety, and mood, so psychiatric diagnostic categories remain confusing and crude.
“

Here author provides 6 reasons and discusses them in detail:

Here author discusses evolutionary meaning of bad feelings and here they are: “four good reasons for thinking that symptoms have evolutionary origins and utility. First, symptoms such as anxiety and sadness are, like sweating and coughing, not rare changes that occur in a few people at unpredictable times; they are consistent responses that occur in nearly everyone in certain situations. Second, the expression of emotions is regulated by mechanisms that turn them on in specific situations; such control systems can evolve only for traits that influence fitness. Third, absence of a response can be harmful; inadequate coughing can make pneumonia fatal, inadequate fear of heights makes falls more likely. Finally, some symptoms benefit an individual’s genes, despite substantial costs to the individual.
“
Author also provides definition of emotions:” Emotions are specialized states that adjust physiology, cognition, subjective experience, facial expressions, and behavior in ways that increase the ability to meet the adaptive challenges of situations that have recurred over the evolutionary history of a species.” Finally he provides graphic representation and table:

Here author concentrate on specific type of emotions that cause lots of psychiatric problems – anxiety and discusses different varieties of it from phobias to PTSD:

He even applies apparatus from economics – The Marginal Value Theorem, to demonstrate how mood helps to obtain optimal time / effort allocation when picking up berries:

The final inference: “the capacity for mood can be said to have a general function: mood reallocates investments of time, effort, resources, and risk taking to maximize Darwinian fitness in situations of varying propitiousness. High and low moods adjust cognition and behavior to cope with propitious and unpropitious situations.”

Here author moves to the area of pathology when mood variations incapacitate person either by depression or bipolar disorder or by some other malfunction. Author provides general description of such malfunctions:

Part Three: The Pleasures and Perils of Social Life

8 How to Understand an Individual Human Being

Author begins this chapter with the story of his experience when in the morning he did analytical jobs with numbers and parameters of multiple patients and in the second half of the day he worked with individual patients. He found it very hard to reconcile these two experiences. Eventually he understood that it requires two different approaches: “Explanations based on general laws that are always true he called nomothetic (nomos refers to laws, thetic to a thesis). Explanations based on historical sequences that occur only once he called idiographic (idio refers to individual unique events, graphic to description). “  It helped him to embrace the idea of psychiatric analysis based on live events, even if reaction to similar events is idiosyncratic depending on values, personality, and experience. Author also provides the breakdown of environment impacting individual into various social systems, emotional states, general and specific sets of influences: 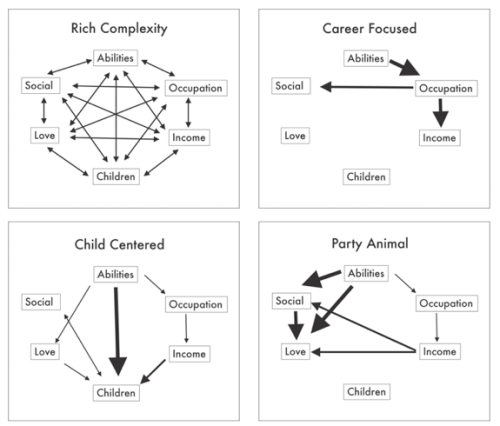 This is about cooperation between people and emotions it creates. Here is how author summarizes its origins:” (1) Benefits to groups of unrelated individuals cannot explain the evolution of extreme human social abilities. (2) Benefits to kin who share the same genes explain most altruistic behavior. (3) Much apparent cooperation among nonrelatives is just individuals doing things that help themselves and that also happen to help others. (4) Extensive cooperation among nonrelatives is explained mostly by reciprocal favor trading. (5) Reciprocity systems shape costly traits for establishing a good reputation. (6) The previous five explanations explain most social behavior in most organisms, but not quite all. They represent a spectacular fundamental advance in human knowledge even though they cannot fully explain human capacities for commitment and moral behavior. Important additional explanations are offered by cultural group selection, commitment, and social selection“. Then he provides table for links between cooperation and emotions based on prisoner’s dilemma with points for win/loose:

Author then looks at Social Anxiety and Self-Esteem with a bit of discussion about psychopaths and their specifics. The final discussion of this chapter is about Grief and research on older couples that demonstrated surprising ease with which many people were able overcame it after a few months since the loss. Interesting point author makes about anniversaries. Often people experience unexplained sadness until they realize that it is anniversary of loss.

Here author refer to psychoanalysis, which he considers debunked and admits that there is something to its idea of repression. Then he proceeds to discuss psychological studies of the adaptive unconscious and how to access one’s own motives and emotions.

Author starts with the sexual fantasy of the world in which everybody finds ideal partner and has perfect sex with them. Then he moves to discuss partner selection and its evolutionary meaning. On the side he provides evolutionary explanation of homosexuality as option exercised by family oriented species in conditions adverse for new family creation. In birds it means adults cold not build viable new nest and stays with parents providing support to siblings, consequently supporting 50% of their DNA. Author also discusses here sex frequency in marriage and problems when it is out of synch between partners.

This chapter is about eating problems that author characterizes as failures of homeostatic control systems. From this point of view obesity is similar to the great many other diseases. He then discusses contemporary environment, which is very challenging to humans because of technological enticement of various kinds from candies and junk food to pornography and sex robots.

This is about people who consciously choose self-harmful behavior, which nevertheless satisfies their needs to feel good and enjoy whatever this behavior produces from alcoholic stupor to venereal diseases. He then discusses evolutionary meaning of drugs production by plants and use of drugs by humans.

In this final chapter author discusses reasons for mental diseases and hopes for DNA decoding to fix everything that were dashed in the last 20 years. He then provides a graph for the Standard model of evolutionary fitness followed by Cliff-Edged model:

Epilogue: Evolutionary Psychiatry: A Bridge, Not an Island

I think that evolutionary approach is much wider than pure biology. It also applies to information systems, technology, sociology, and all other areas in which there are systems, continuously changing whether randomly or not with following up test for fitness. So it could and should be applied as major methodological tool to research and understand human beings and their mental conditions. I think that most productive way would be longitudinal studies on individuals throughout their lifetime to identify periods of perfect functioning, some positive or negative deviations, and dynamics of changes from one state to another. The treatment of mental problems without knowledge of what is normal for the specific individual is like trying to repair car without knowing its make, year, mileage, and details of how it normally works. Humans quite a bit more complicated, so need much more data collection to understand how individual psyche works when it is OK and what variation from this OK state developed that makes it fail.