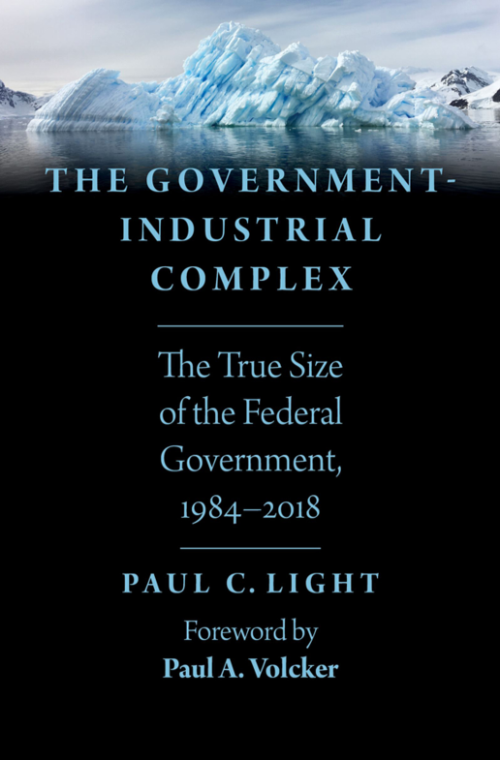 The main idea of this book is to identify true size of government counting total FTE employees not only of government, but also of contractors and grants recipients. Author intends to demonstrate that American strive to limit government had resulted not that much in small government, but rather in big government-industrial complex in which many government tasks conducted by employees of private companies via government contracts and grants, making it actually less effective and more cumbersome, even more expensive. The solution author proposes is to increase number of government employees so they would do tasks that need to be done and in process actually save money on contracting overhead, complexities, and inefficiencies.

“Chapter 1 starts discussion by focusing on Eisenhower’s warnings about the conjunction of what he described as an “immense military establishment” with “a permanent armaments industry of vast proportions” and proceeds to a description of the methods used to calculate the true size of the federal, contract, and grant workforce. As chapter 1 argues, Eisenhower presented a framework for tracking the “unwarranted influence, whether sought or unsought,” of any government-industrial conjunction, large or small, and even outlined a method for measuring the true size of government through head counts of federal employees and funding for contract firms and grant agencies.”

Here author provides description of methodology and results of analysis of head count and functional allocation of government employees in 2017: 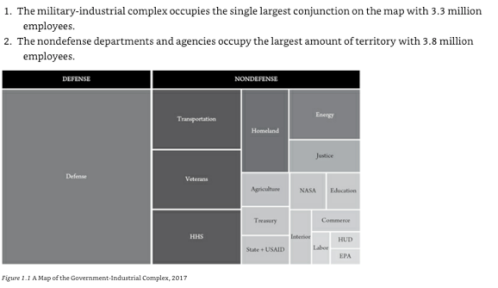 Author also discusses how much there is hidden government-funded employment and provides a comprehensive list of reasons why nobody can even estimate these numbers: 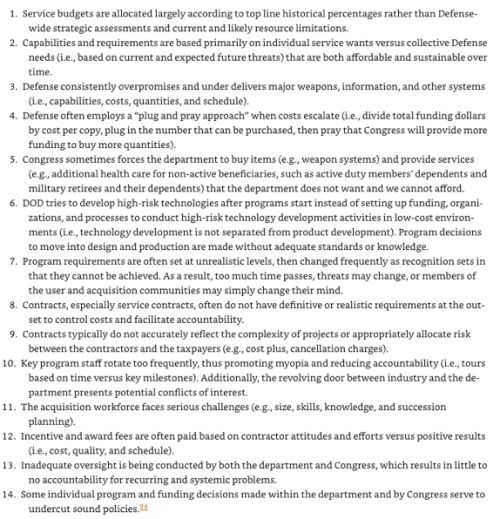 2. The True Size of Government

Chapter 2 explores patterns in the number of federal, contract, and grant employees under Presidents Ronald Reagan, George H. W. Bush, Bill Clinton, George W. Bush, and Barack Obama. The chapter starts with an overview of the measurement challenges in estimating the true size of government, a discussion of threats to accuracy, and a description of an estimating approach based on contract transactions and grant awards. The chapter also offers caveats on using the information and examines the data deficits that currently frustrate efforts to monitor the blended workforces that faithfully execute the laws from both sides of the complex. The chapter then turns to a history of the changing size of government under Reagan, George H. W. Bush, Clinton, George W. Bush, and Obama. Reagan and George W. Bush pushed the total size of government upward during war, while George H. W. Bush, Clinton, and Obama all harvested the peace dividends that followed. The chapter examines each president’s view of the federal workforce and explores patterns of growth and decline as the true size of government surged during war and economic crisis and compressed during peace and recovery. Readers are urged to pay particular attention to Reagan’s role in creating a Cold War peace dividend that reduced the number of employees on both sides of the government-industrial complex. Reagan also helped launch two decades of military base closing that gave his successors enough savings to hope for no new taxes and declare an end to the era of big government. The chapter ends with a quick review of President Donald Trump’s early relationship with the government-industrial complex and ends with a discussion of the federal personnel caps, cuts, and freezes that have done so much to alter the government-industrial balance. Although most of these post–World War II employment constraints had negligible effects on federal employment, they fueled public demand for a government that looks smaller but delivers more and the use of contract and grant employees as a work-around.
Despite difficulties of accounting presented in the first chapter author provides some official data on history of government-funded head counts: 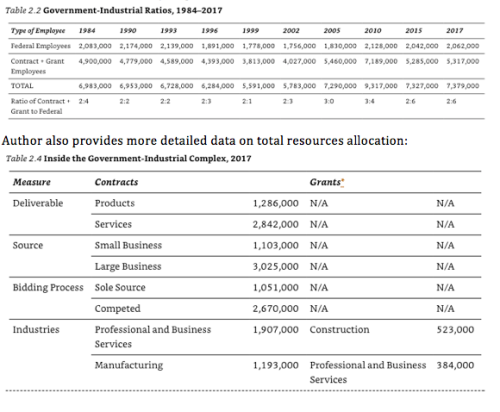 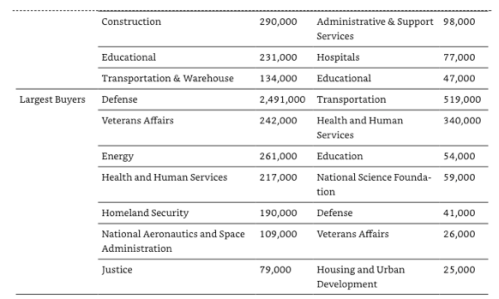 3. Pressures on the Dividing Line

Chapter 3 examines the time limits, bureaucratic constraints, and political realities that drive federal functions and jobs across the dividing line between government and industry. Whether by accident or intent, the fifteen pressures catalogued in the chapter give Congress, the president, and federal officers ample incentive to use contract and grant employees in lieu of federal employees. The pressures also frustrate effective deployment of federal, contract, and grant employees. The chapter ends with a short discussion of the prospects for reducing the pressure through comprehensive reform.

This chapter is also interesting by author’s analysis of differences between direct and indirect government-funded employees. Here is result of one research:

Another interesting part here is the example of bureaucratic structure that includes some number of layers in bureaucracy and people that occupy them: 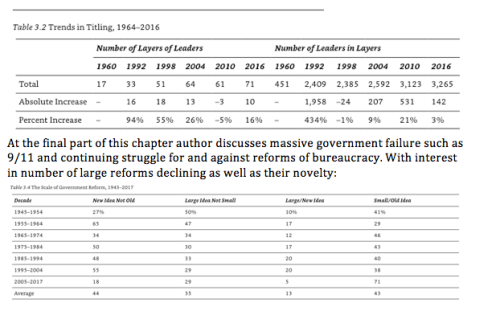 Chapter 4 starts with a short history of recent efforts to realize Eisenhower’s proper meshing of government and industry. As author argues, six of the past seven presidents focused on one-sided reforms designed to cut big government or discipline the contracting process. Obama is the only recent president who focused on both sides through a broad agenda for government improvement and aggressive reforms in the blend of federal and contract employees. Obama eventually retreated from both efforts, but provided an inventory of options for future two-sided action. The Chapter draws on this history for developing a “reset and reinforce” process that might be used for a regular reblending of the federal government’s federal, contract, and grant workforces. Based on rigorous annual head counts and workforce planning, this proper blending involves six steps:

(2) Force both sides of the government-industrial complex to take social responsibility for their work,

(3) Track movement across the divide between government and industry,

(4) Sort functions based on careful definitions of which workforce should do what,

(5) Monitor and reset caps on the true size of the total workforce, and

(6) Reinforce the dividing lines between government and industry. Anchored by more precise inventories of who delivers what for government, this reblending process could ease long-standing limits on federal employment, while acknowledging the important role that contract and grant employees play in launching bold endeavors and achieving success.
Author looks in details t every one of these steps and concludes the chapter with question: who can deliver on these recommendations?

5. Conclusion: The “Next Gen” Public Service

“Chapter 5 ends the book with a discussion of the “next gen” public service. Even following a careful reblending using the sorting system presented in chapter 4, Congress and the president must assure that the government-industrial complex embraces a continued commitment to public service, a mission that matters to the nation’s future, and a workforce that bring new vitality to aging institutions. Federal employees are going to retire in record numbers over the next decade, but their departures will create a destructive “retirement tsunami” unless Congress and the president act now to recruit and train the next generation of public servants wherever they work in the government-industrial complex. Congress and the president must make sure that every federal, contract, and grant employee is committed to faithfully executing the laws, including laws they might oppose. Too many decisions about the choice and deployment of the federal government’s blended workforce are made without concern for cost, benefit, performance, accountability, and the underlying public-service motivation that should call all government employees to their work. Just as Eisenhower argued that the military-industrial complex was imperative to the nation’s safety, this book argues that the government-industrial complex is critical for supporting bold endeavors and creating lasting achievements. And just as Eisenhower also argued that a proper meshing of the military and armaments industry was the only way to protect liberty, this book asks how to align a much larger government-industrial complex than Eisenhower could ever have imagined. It is impossible to know whether Eisenhower would describe today’s government-industrial complex a conjunction of an immense federal workforce and a large contract and grant industry, but it is easy to imagine that he would say its size creates the same “grave threats” may be perfectly appropriate, if not much too weak.”

This book is an interesting artifact of American society demonstrating how deep is foundation of American culture that forces bureaucrats and politicians go to very long ends to hide size of the government. One should make no mistake that it is all about this hiding. Practically in any other country no bureaucrat or politician would think twice about increasing size of government workforce, but in USA such increase is done underground, even if per author’s tables this underground of formally private employees represents 5 out of 7 millions people paid by government. I well understand frustration of author who obviously would like all these people to be moved to government jobs in which he believes they would be more effective and productive. I do not believe that it would be the case, but I would also like to see the same happen. Unlike author I believe that most of these jobs have nothing to do with legitimate government functions and mainly represent malignant growth on American society, which simultaneously deprives its economy millions of potentially productive people and deprives millions of actually productive people from keeping significant share of result of their work. I would hope that open and clear presentation of government workforce and results of their activities would make it politically necessary really decrease size of government and move great many of its activity to private sector.