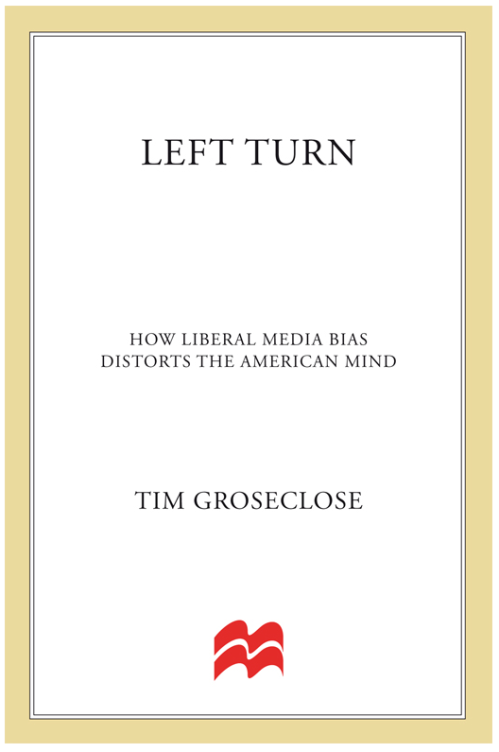 Author explicitly stated the main conclusion of this book is based on extensive research and demonstrates that the left leaning media shifted American political opinion by approximately 8 to 10 points, keeping Democrats and their ideology relatively competitive, which would not be possible without media influence. Author introduces a notion of Political Quotient as scale from 0 to 100 with top left being 100 and top right 0. Here is how author describes overall methodology and intermediate conclusions: 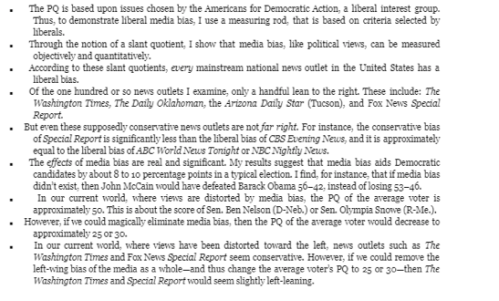 PART 1. Political Quotients and the Science of Politics

Here author describes methodology of defining PQ for individuals, and media published opinions based and case-by-case calculation. He even provides tools to calculate one’s own PQ and presents results for some specific politicians and media outlets: 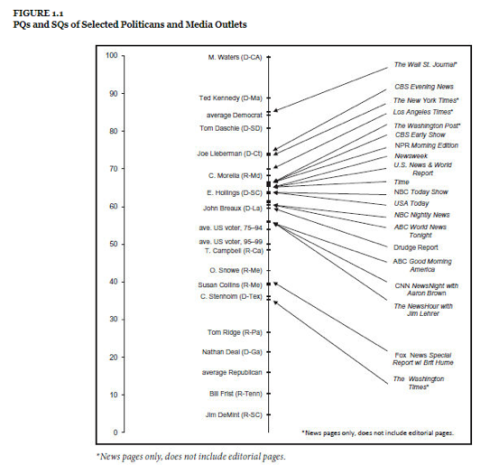 Author here discusses one of the most important indicator of such bias – circular sourcing of the media. Interestingly enough “intellectuals” are more prone to be disoriented in this way because they believe in their own capability to recognize it. Th real way out of this trap in to find independent source of the story.

Author starts this chapter with reference to his own upbringing as conservative and notes that he stays one with PQ13. Then he moves to more interesting point: the difference between normative and positive questions with the former being about opinions that could not be factually confirmed, while latter render themselves to factual and logical confirmation. After this author discusses reality of positive questions being better answered by people who actually imbedded in related environment. For example, the people who lived among military and their relatives could give the best answer to why people join military. Similarly, people of racial group against which it is directed could give the best answer about reality of racism. Finally, author discusses why conservatives are more interested in analyzing media bias. He makes an important point that this bias is positive question and therefore could be answered with data so formal and scientific analysis would demonstrate that liberal bias exists, making such research rejected by liberals and embraced by conservatives.

Here author discusses what and who are liberals and conservatives by using leftists Americans for Democratic Actions (ADA). Here are liberal positions:

Correspondingly, the negation of these position is conservative, so these attitudes exppressed via voting  and/or support become measurable signals allowing PQ identification for a person.

This is about methodology of defining PQ, its centers and extremes based on voting records of legislature. The graph represents result of such calculation demonstrating successful move to the left over recent decades:

Author also answer to some challenges posed to his methodology and then presents reasons why middle is more interseted in being truthful than extreme ideologues on either side.

This case study is about media distortion of student admission in UCLA when admission of blacks to university was considered too small, when in reality the number of applications was correspondingly small. This represents use of statistics to mislead people.

7.Hidden Under a Bushel

This chapter is about another technic – hiding relevant information. The examples here are Katrina, and Obama’s pastor of “god damn America” fame. Van Jones, and finally Obama’s election by the color of his skin.

This chapter presents story of conservative journalist joining regular newspaper and how it demonstrated different approach to the same story, in this case imams on airplane.

This chapter is response to criticisms of author’s work on bias:

In actuality surveys probably underestimate bias because journalists are conscious about demands for objectivity. Author provides pretty funny examples of this approach.

If the direct political attitudes of journalists is the first order of bias, the pressure on minority opinion holders, tendency of overwhelming majority to move to extreme positions.

In this chapter author analyses counterfactual of journalists being as conservative as some of the counties in Utah. The results would be the same pressure on individual to stay in line with majority. Author also looks at idea that corporate media management easily override liberal inclination of journalists, concluding that reality as presented by real media output is opposite – journalists express their views, rather than management’s.

Here author looks at centrist regions of the country and provide an interesting graph for representatives / vote correlation: 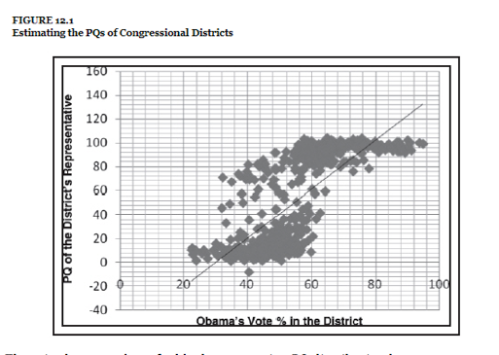 There is also a number of table demonstrating PQ distribution by states.

This chapter is about author’s methodology and its critics. It also provides results of analysis for some news outlets:

This chapter is about language manipulation in order to frame some issue in positive or negative form. It obviously works pretty well and author uses it to measure media bias using a specific case of “partial birth abortion”. He provides a very enlightening table to demonstrate it: 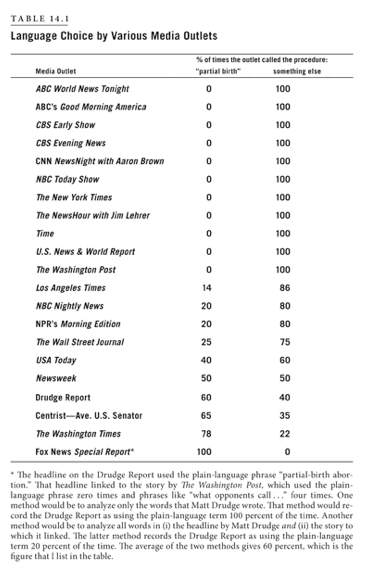 This is continuation of language discussion and reference to another research when computer analysis of 2-3 words combinations produced typical use of language by sides:

Here author moves to evaluating effects of media bias, stating that his previous believes in the negligence of such effect were disproved by evidence. In order to discuss his conversion author presents some scientific issues such as endogeneity problem and demonstrates how it could and does influence results of economic and sociological research. The only really good solution is natural experiment. As example of such experiment author refer to Della Vigna and Kaplan study of Fox network expansion demonstrating how it influences the voting patterns around the country.

This is about two more research projects: Washington Post vs. Washington Times experiment when free subscription for randomly selected individuals led to 3.8% gap in voting. Another one Cai Wang laboratory experiment with messaging demonstrated 0.282 variations from the middle of 5, when rational-choice theory predicted variance of 0.

In this chapter author introduces a quantitative measure of media influence:

Author suggests here that the main method of fixing the problem of media bias should be transparence – effort to force journalist to openly present their views so news consumers could understand the probability of bias and make correspondent adjustments to whatever message is transmitted.

Ii is a very nice scientific analysis of media bias to the left. Until now I mainly agreed with rational- choice approach. It seems to be too much to believe that media is capable to move public opinion and voting behavior in any significant way. Unlike others I did not think that it is because the media is ineffective, but rather because people are not really interested in what media has to say and mainly ignore it. It is seemingly supported by the fact that political media is not really watched and listen by too many people. Enough to say that in the nation of 300 million just some 10 millions are actually watching news. Add to this my experience of growing up in highly politicized totalitarian state where agitation and propaganda were compulsory parts of live and education generally ritualized into meaningless flow of words and images that vast majority of population was completely ignoring regardless of whatever was propagated at any given moment. By demonstrating that the media bias is actually moderately effective, this book forced me to change my mind and accept the need for active and effective countermeasures against the ideological success of leftist movement. These measures could not be effective if conducted at the level of logic and scientific explanation of facts. It should be based on generating emotional response to leftist ideology by bringing up its murderous character demonstrated everywhere where leftists took complete power and stressing that any liberal bias is not based on journalists’ good intentions somewhat misplaced, but on their evil strive to power to control population and in process transfer to themselves products of other people’s efforts.