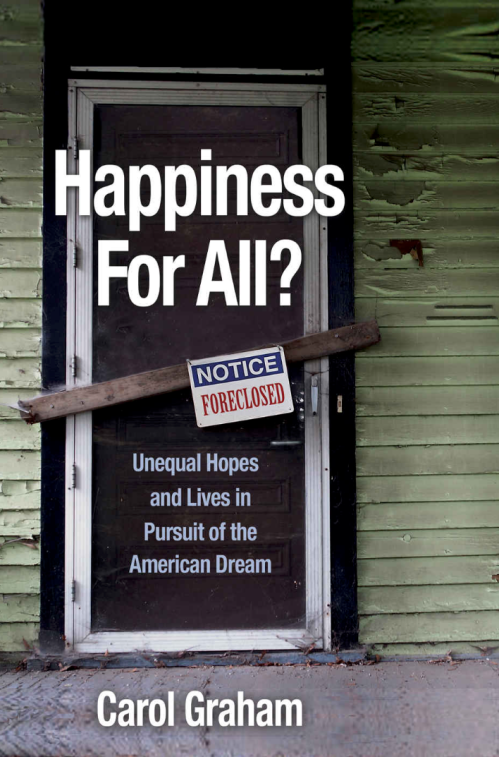 The main idea of this book is to review results of research about happiness and wellbeing of people with objective to define how it changed over the time in America and in the world. Author attempts to demonstrate how it depends on income inequality, availability of opportunities, and that it seems to be better to be rich and healthy than poor and sick.  Also, the point is made that situation in USA seems to be deteriorating at least based on pools, while in other places, especially Latin America it gets better.

CHAPTER 1.  INTRODUCTION; Happiness for All: Living the Dream?

Author starts by immediately switching topic from American creed of “pursuit of happiness” to generally liberal creed of equal availability of American dream and general well being. She refers to research that shows that subjective wellbeing is linked to availability of opportunity. After that she moves to inequality of opportunity and its dynamic character, if perceived as access to opportunity. Then she discusses research data from polls demonstrating that despite decreasing numbers of brainwashed population from 64% to 56%, the majority still believes that they pay fair share of income in taxes. She also discusses technical issues of dimensions and metrics of wellbeing, role of believes and what she intends to present in the following chapters of the book.

CHAPTER 2. What Happened to Horatio Alger? U.S. Trends in Inequality and Opportunity in Comparative Perspective

The reference to Horatio Alger is used mainly to profess that his story about making it from the bottom to the top of society are not really describe realities of contemporary live when children born to lowest strata of society tend to stay there. She consistently points out that Americans generally overestimate societal mobility of their society. She provide graph to demonstrate that with increase in Gini mobility decreases:

After that she moves to explanation of reasons of inequality growth:

At the end of chapter author provides technical review of measuring mobility rates and states that American practically lost its status as the land of opportunity.

CHAPTER 3. Who Believes in the American Dream? Public Attitudes about Mobility in the United States and Beyond

This is about different attitudes to American dream and it starts with discussion about relationship between inequality and wellbeing. Somewhat contrary to general leftist understanding, author points out that there is no prove of negative impact of inequality on wellbeing everywhere, but it is highly dependent on the country. Author looks at multiple studies and concludes that America generally lost its exceptional character when people believed in opportunity as sufficient benefit to overcome negatives of inequality. However, graphs provide seems to show small difference in well-being: 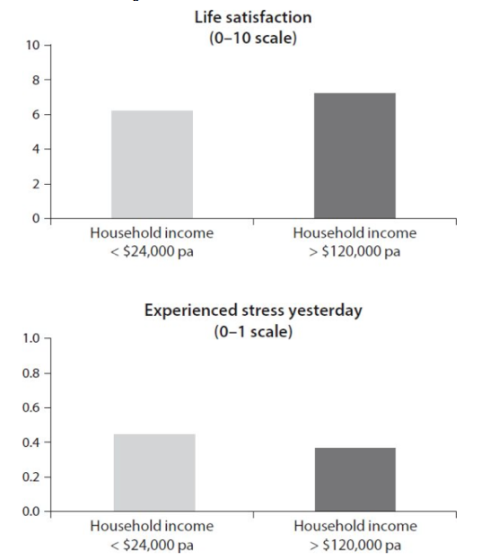 Author provides quite extensive comparison between USA and Latin America and then discussesd attitudes to hard work and opportunities accross the world. She provides a very interesting result demonstrating that American rich have attitudes close to general population of Latin America where people across income levels believe that hard work is beneficial, while American poor much more close to Europe where a lot less people believe in it, also acrossall levels of income:

CHAPTER 4. The High Costs of Being Poor in the Land of the Dream: Stress, Insecurity, and Lack of Hope

This is about high psychological cost of being poor in America, even if purely material conditions such as food, housing, transportation, and such would be considered at the level of rich in other countries:

There is also a very interesting graph demonstrating impact of assistance on satisfaction: people without assistance are generally more satisfied with their live:

Author then looks at detailed picture in USA with somewhat higher concentration on stress, which she defines as being good (mainly for rich with creative and intensive work), and bad (mainly for people who sterrssed by lack of funds). She repeants the trope of two Americas, but with an interesting quirck – blacks are more optimistic than poor whites.

CHAPTER 5. Well-Being, Aspirations, and Outcomes: What Do We Know?

This is about knowing where one wants to get in order to decide direction of effort. Author explores how effort depends on believe in opportunity. The main point is that good situation prompts people to do things that will improve the future situation and vice versa.  For example: good health -> joy of movement -> more exercise -> even better health or sedentary life style -> poor health -> hard to move -> no exercise -> even worse health. Important thing here is also locus of control: internal means “If I want something I need to do something because it depends on me” external: “If I want something it is somebody else’s responsibility to produce it so I just need to demand it louder and louder”. Finally, time horizon is also important: long term much more effective because leads to education and sustained effort.

CHAPTER 6. Can We Save the Dream?

The final chapter is about all these new happiness and other metrics, whether they are useful or not.

I do not think that happiness is that much linked to material conditions. It is a lot more complex notion and is extremely subjective, personal, and changeable over the time. Nevertheless it is a good review of material subset of causes of happiness including comparative approach of how one is doing compare to peers. I think a bit underexplored is a very important issue of agency, which in my opinion playing a very important role as soon as subsistence level material needs are met. It also seems to be missing another very important component of happiness – satisfaction from affirmation of one’s self-image. The person who believes that he is number one in something would be unhappy if found himself in the second place, while person who believes that he is in the top 100, will be happy if found self at number 25. In short it is interesting, but extremely limited approach to the issue.