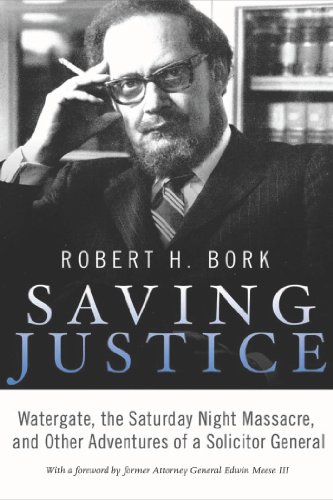 The main idea of this book is to present author’s point of view on what actually happen before and during his tenure as Solicitor General in Nixon administration at the time of Watergate. Author demonstrates complexity of the legal and administrative process behind the scenes and somewhat dysfunctional operation of American legal/administrative/political bureaucracy with its struggle for power and influence over the country.

This is a brief description of functionality of The Office of Solicitor General and its functions. These mainly include arguing cases before Supreme Court on behalf of Executive Branch of government. In 70’s – the period author describes, it was just a few lawyers processing some 1700 cases in 1973. Author also discusses his attempt to streamline workflow and make the office more efficient. He defines the most important part of his job as “assist Supreme Court in the development of legal doctrine”.

Chapter 1 – Getting the Job

This is a story of author’s getting job of Solicitor General in Nixon administration. It started with author’s published article supporting Nixon for president in 1968. It follows by description of several interactions with Nixon himself and then his people with stress on Nixon general dislike of Ivy League professors. As a bit of distraction, author refer to a bad omen for his role when during swimming in ocean resort just before being sworn in, he was pulled by the current into the see and when he was frantically waving for help, getting instead of help, some joyful wave back because people on the beach though he is waving just to show how much he enjoys swimming. He refers to this situation as very similar to his future experience related to Watergate.

This chapter is about the apex of Watergate scandal when author was offered place on Nixon defense team, but was able successfully avoid taking it. It is interesting because author’s note about his conversation with Haig who suggested that Nixon would rather burn tapes than give them. He was tempted to ask why Nixon did not do it yet, but did not ask. He characterized it as the best sentence he never pronounced. It would obviously be not good for author if tapes were burned on advice of Solicitor General.

This is an interesting chapter about the role of Supreme Court discussed around actions of judge Douglas who supported stay on military operation in Cambodia. It involved some disagreement with other judges and eventually was overwritten by judge Marshall and then by telephone conference.

This is about a little discussed part of the Watergate coup when rather feeble attempt was made on double impeachment of President and VP so the Executive powers were transferred to Democratic speaker.  Author seems to agree that Agnew was as crooked politician as they come, but not that much more crooked than all others. The double impeachment was avoided by getting Agnew to resign as part of the plea bargain.

Here author discusses the whole issue of special prosecutor and his power and then goes through events of Saturday night and what happened right before that. Very interesting point here is that Nixon’s first choice for new VP was not Ford, but very popular John Connally who was wounded in the car with Kennedy and in 1973 switch to GOP. Democrats in Congress would not agree because of fear that he really could win the next election. Also, there is an interesting description of complexity and logic of the resignations of this night and author’s decision to take responsibility as Acting AG and fire Cox. He also stresses his concern to avoid any hint on personal benefit from this decision, all the way to refusing use of limo assigned to AG.

Chapter 6 – After the Massacre

The aftermath of the deal was mass resignation of staffers who unsurprisingly were able to use it as career enhancing vehicle. However remaining staff did a good job and author stresses that it was not an easy thing to do. Author also discusses storm outside which he deems to be saturated with “poverty of moral rhetoric” presented by constant calls from other Yale graduates accusing author in degrading dollar value of Yale law degree by his actions. Another one was inability of press and public to assess legal side of situation and appropriateness of author’s actions. Author also expresses his disappointment in many lawyers who failed to act professionally.

Here author discusses the selection of the new special prosecutor and the changes in legal environment that occurred in this period. Specifically, he discusses FBI issues with legality of surveillance that resulted in creation of FISA court. Other issues were War Power Resolution, Campaign finance prompted by Eugen McCarthy campaign based on very large donations by rich activists, and attempts to make special prosecutor into permanent office. He also describes final stages of impeachment saga.

Here author briefly describes his live after these events, including participation in Ford and Reagan administrations. Interesting also is his reference to Supreme Court nomination that he believed was a sure thing because of his qualifications, the fact that none of his decision as judge was overturned by Supreme Court, and history of bipartisan support for qualified judges. Obviously, he was wrong because he was the first appointee who was attacked by democrats on the political basis and defeated. At the end author refer to Obama’s statement that he would appoint judges with empathy to a little guy, which completely rejects the very notion of impartial jurisprudence. Author warns against judges who used their position to exercise power, but not authority and affirms his believe that the remedy for America legal ills is Originalism that provides hope to maintain constitutional structure of the country.

I read Bork’s work before and found myself mainly in agreement with his legal ideas. This book presents narrative of his exploits as Legal bureaucrat at the very interesting point when political bureaucracy represented by Nixon was attacked and defeated by American elite combining professional formally non-political, but really deeply politicized in support of big government bureaucracy, legal, and media establishment. The whole Watergate saga demonstrated power of this alliance, which success assured their control over the country for the next 40 years. As could be expected, this control led to material deterioration of American quality of live both economically and in international affairs, leading to massive deindustrialization, terrorist attacks, massive debt, and overall unhappiness with the state of affairs. Now this fight is renewed in much more interesting form with Trump winning presidency and the elite dropping any pretense of unity and commonality with their opponents. It would be interesting to see how well Trump and his team learned lessons of Watergate and whether they will be able to repel the attack and win battle with bureaucratic/ legal / media / big corporate leadership united forces.