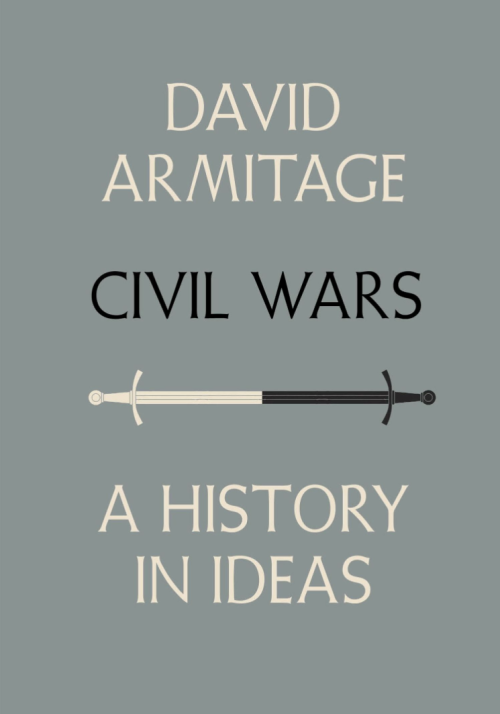 The main idea of this book is to review the very notion of civil war from various prospectives starting from historical, then moving to philosophical and legal approaches, and finely completing it with contemporary political analysis. Probably the most important inference here is that civil wars are way too complicated and mainly depend on participants’ ideas about themselves, their group, and their opponents therefore it should be treated as the great opportunity for historical approach, rather than legal or philosophical.

It starts with somewhat interesting complain that a lot of history research dedicated to wars, but very little of it to civil wars, while in reality civil wars, especially over the last 70 years after the end of WWII, are much more common than wars between states. Author discusses cruelty of civil wars that often goes way beyond cruelty of wars between states, especially in relation to non-combatants. However the main stress is not on this, but rather on the “generative” role of civil wars that author puts under investigation, claiming that this is a book “in ideas”. It makes sense because ideas are usual drivers of Civil Wars, unlike territorial and political conquest that drives regular wars. Author defines development of ideas about civil wars based on three points:

Part I: Roads from Rome

The first place the author goes to – Rome, which he considers inventor of civil war. It came from Roman tradition to call wars by the name of opponents so then opponent belongs to the same civic community the war becomes civil. After that author goes into details of Roman and Greek notions of internal conflict: for Greeks political war was inconceivable, but for Romans it became nearly routine. Author allocates a lot of space to Roman internal conflicts because they often had clear character of class war for political power.

Here author refers to idea that “forgetting is the best defense against civil war”, then proceeds to discuss civil war between Caesar and Pompey. This was practical consequence of lack of civilian control over military leaders who managed to build personal loyalty of troops to themselves that was exceeding loyalty to the Rome. Author points out the story of Cicero’s promotion of military leaders and attempts to define differences between various types of internal conflict. This follows by more or less retelling of history of Roman conflicts.

This chapter starts with discussion about influence of Roman writings related to civil wars on development of European culture. They popularized notions of civil strives and variety of forms of control over society somewhat different from what was usual at the time. In process it probably created intellectual environment susceptible to raising weapons against other members of the same society. By seventieth century it all moved from domain of history and literature into domain of law and actual implementation. As examples, author discusses Hobbes ideas and actual civil war of British Parliament against the king.

4: Civil War in an Age of Revolutions: The Eighteenth Century

Part III: Paths to the Present

This starts with American Civil war and Gettysburg Address and, more interesting, with General Order 100 drafted by Francis Lieber that defined legal code for the conduct of war 6 months before Gettysburg. Author discusses the legal and philosophical meaning of civil war in XIX century when ideas of Enlightenment become dominant in the Western world. Author points out that Confederacy never accepted that it was Civil war. For them it was war of Northern aggression not different from any other wars between different polities. Eventually the range of attitudes in emerged in Western civilization goes from the notion that all wars are civil wars because of humanity being a whole, to infinite variety of non-civil wars between citizens of different entities: national, religious, territorial, and any others that do not accept each other as members of the same group.

Both trends fully matured in XX century when on one hand some perceived WWI and WWII as civil wars within mainly western society, while on the other hand any diverse entity came under pressure from inside when groups small and big demanded independence and initiated wars of divorce. Author reviews this development, especially its diplomatic and legal details using example of Yugoslavia and Serbia civil wars that outgrew into international conflict. The second part of the chapter is about philosophical approach to war with lots of attention paid to Rawls and his classification of wars:

In conclusion author discusses contemporary implications of wars designation as Civil or International conflicts that could and do create not only different psychological attitude, but also often lead to international involvement, including military, on one or another side of conflict.

I think that the differentiation between civil and. international wars is important because it often defines level of savagery the war is conducted with. Except for some very specific cases when war was waged with purpose of annihilation of other, the civil wars are usually more savage that international. The wars are always between groups and humans are always belong to the multitude of groups from small group of their close family to the big group of their nation, to the huge group of their religion and/or philosophy. Therefore, any war’s character depends on what people are fighting for and what is breakdown of groups that are fighting each other. I would define the civil war as the war where significant groups of individuals belonging to one political entity, but irreconcilably diverse in their attitudes and believes fight each other with objective to suppress, eliminate, or expel their opponents. The good example would be revolutionary wars including decolonization when significant number of people are quite satisfied with existing situation and resist change while others could not tolerate status quo any more, like it was during American revolution when 1/3 of population were Patriots, 1/3 Tories, and 1/3 Neutral who eventually sided with Patriots due to deprivation brought on by British army. In this case the internal conflict between colonials with different approaches to relations with British polity, they all belonged at the time, outgrew into international conflict between two nations, when colonials formed the new American polity. Quite different development occurred during American Civil war when American polity containing diverse states developed into two groups of states with irreconcilable differences in all significant areas: economically, legally, philosophically, and politically, leading to armed conflict between them. There were no 1/3 of abolitionists on South and even if majority of Northerners were indifferent to slavery, tariffs, or any other disputes with South, they had strong enough support for Union to fight for it. Interestingly enough, end of formal conflict did not really end the war, but rather continued for another 10+ years in the form of irregular guerilla warfare waged by Southern Whites against Southern Blacks supported by transplanted Northern Abolitionists until more or less acceptable for all accommodation was achieved in the form of segregation. In this case the war that started as war between states within Union outgrew into the civil war of two racially and ideologically different groups living on the same territory under umbrella of the same state.