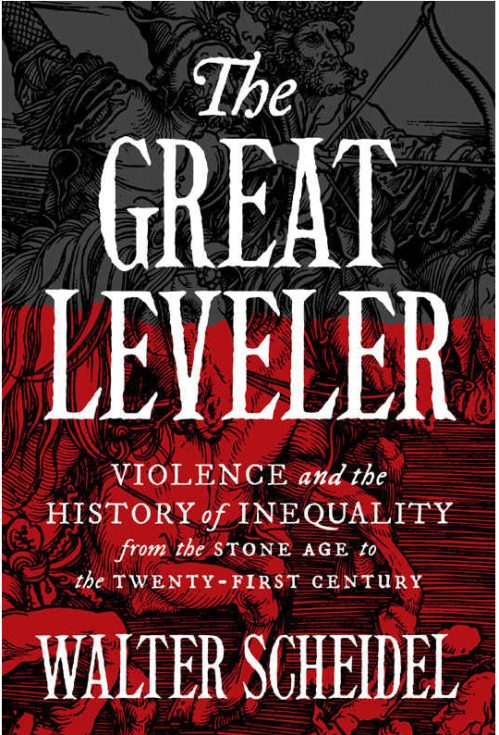 The main idea here is that inequality is considered unhealthy for the society and it probably is, but history demonstrates that it is typically a product of peaceful and productive development of society, while decrease in inequality is typically consequence of some kind of disaster: war, revolution, pandemic, or collapse of society. There is also attempt to look at recipe for leveling without disaster, but it is limited to somewhat trivial taxation ideas.

Introduction: The Challenge of Inequality

The introduction starts with the notion that inequality is growing and it is dangerous because it creates tensions in the society and could even destroy it. However this book is interested not that much in equality, but rather in conditions when it decreased often dramatically. Author finds four typical occurrences when it happens: War; Revolution, Society Collapse, and Plague. Author looks at all of them in details, reviews alternatives, and finally discusses future of leveling.

PART I. A BRIEF HISTORY OF INEQUALITY

As usual this starts with discussion of hunter-gatherers and their equality based mainly on very low productivity so there were not enough goods and services susceptible for accumulation. Even thou some burials demonstrate high level of variance in prestige in form of artificial decoration such as bids that required huge amount of labor to produce, the real inequality came with agriculture when increase in productivity and, most important, ability accumulate wealth or obtain it from others provided opportunity for its growth. With ability accumulate and transfer wealth came necessity for a state, which would protect one’s own wealth and, if military successful, would allow obtain wealth from others. Here is a nice picture of the structure of typical agrarian society: 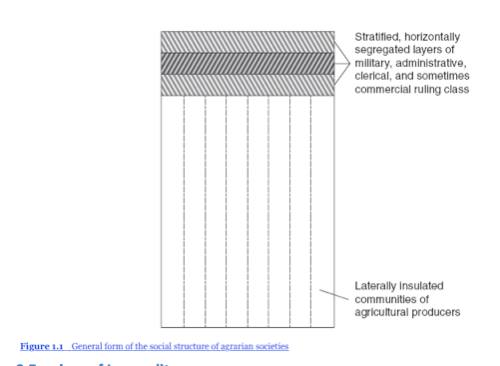 After discussing generic characteristics of agrarian states, author briefly reviews 2 most successful empires: Chinese and Roman both of which provide ample data for inequality. Here is an estimate of Wealth at the top and population growth for Romans:

At the end of chapter author discusses patterns of empire wealth circulation that typically occurred via violent redistribution among elite.

This is somewhat high-level discussion of changes in inequality supplied with a bunch of interesting graphs: 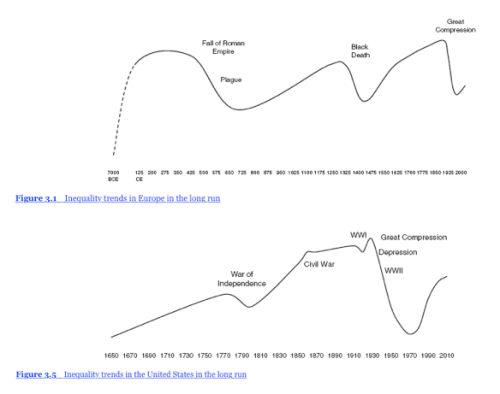 This chapter is an analysis of equalizing impact of the total war using Japan as an example. Probably no other country reached such level of war effort by the totality of its population without being actual battlefield. The leveling results were truly dramatic: 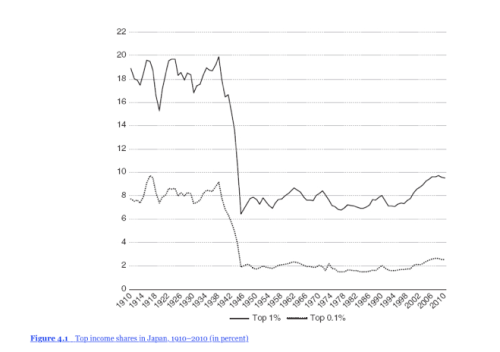 This chapter expands previous analysis to the whole world, clearly demonstrating that war destruction leads to more equality, even if it is equality in misery. This is achieved by dramatic decrease in private wealth, especially comparatively with resources controlled by the government: 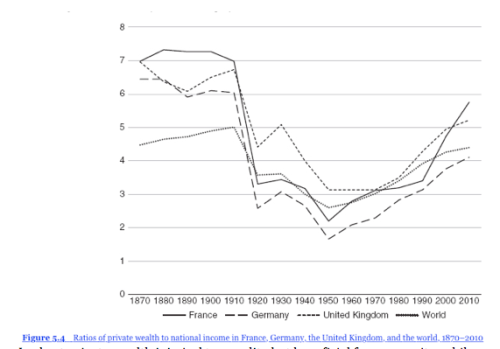 This chapter looks at history of preindustrial mass mobilization wars. From ancient times until recent occurrences and find some evidence that they had significant equalizing impact. Mainly it was result of need to obtain participation of low wealth masses as soldiers and supporters of military effort, which was paid by upper wealth class correspondingly decreasing their wealth. Overall the dispersion of equalizing was wide and dependent of character of the war. Similarly historically civil wars not necessarily decrease inequality often just moving wealth from one group to another, but it was highly dependent on character of war with high intensity was obviously decreasing overall wealth of the society.

This chapter is about recent Russian and Chinese communist revolutions in which equalizing became one of the most important objectives. Since these revolutions included mass killing of higher wealth population, their achievement in formal equalization were unparalleled. However if one takes into account real control over society’s resources, this equalization become more than dubious.

This is similar look at French revolution, Taiping rebellion, and many other rural revolts, city revolts, and city-state revolts. Whatever leveling occurred during such events it usually was not very long lasting reverting back to inequality as soon as revolutionary period ended and more or less normal economic development would restart.

This is discussion of pretty obvious fact that when society collapses it’s hierarchical structure going down consequently removing all forms of enforcement of existing controls over resources, which leads to dramatic leveling. The cases author uses for collapse discussion are Chinese history of the end of Tang dynasty, Western Roman Empire, late Bronze Age Mediterranean and pre-Columbian America. It is nicely supported by archeological research represented by historical house size diagram in Britain:

Another powerful leveling process is epidemics, which kills lots of rich as well as poor. Author analyses leveling caused by the Plague in Medieval Europe. Interesting here is the fact that leveling occurred not only due to death, but also due to post epidemic dramatic growth of wages because of scarcity of labor. Here is a nice graph to support it: 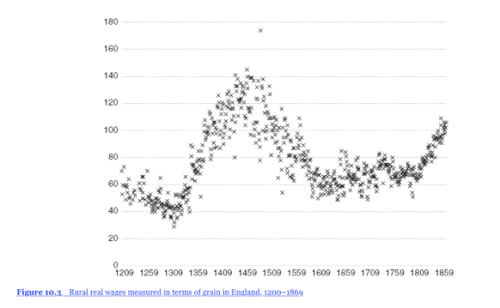 This is an expansion of previous discussion to cases when all 3 combined practically destroy society, bringing society to the lowest levels of inequality since the start of agriculture. It is done based on American history when European invasion brought both pandemic and destructive war. Author also looks at Justinian plague 541-750 CE and the Antonine plague in Egypt circa 165 CE. More detailed analysis based on well collected and preserved local data for the city of Augsburg during 30 years war presented by the graph below: 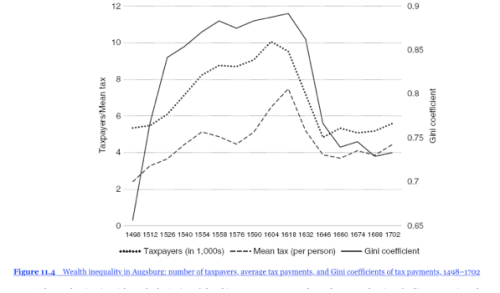 Even more interesting is result for this city by numbers demonstrating that population loss was about 50%, but it fall disproportionally on poor. In other worlds it was not that much leveling, but shift when higher levels of income shifted down to lower levels, while population in two lowest income bracket was dramatically decreed by shifting out of live:

This is the look at possibility of leveling without massive bloodletting typical for war, revolutions, pandemic, or collapse. One such method is Land reform, another Debt relieve and Emancipation of slaves or serves. Even more peaceful leveling occurs during economic crises when loss of wealth obviously hit people in possession of this wealth. Finally democratic political system typically allows leveling via taxation and welfare state.

Here author discusses more positive way to decrease inequality: education and skills enhancement. This is unusually positive way because instead of leveling via decrease of overall wealth, it promotes wealth increase via increase in productivity of educated people.

14 What If? From History to Counterfactuals

This is a speculative discussion about what would happen if history were different than it actually had been.

PART VII. INEQUALITY REDUX AND THE FUTURE OF LEVELING

Here author discusses our time, relatively peaceful and prosperous, but with growing levels of inequality that gives jitters to many of intellectual. He provides a table and graph showing this growth with the most prosperous and wealthy country USA being also the most unequal: 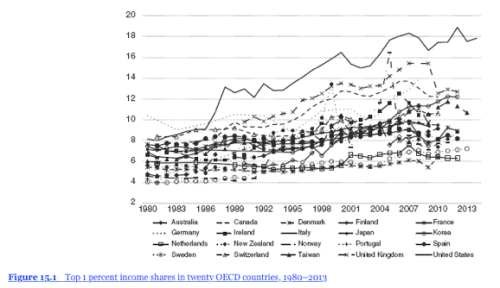 This is followed by discussion about market, power and related issues that lead to inequality growth: executive compensation, globalization, automation, and such.

Author obviously not sure about future, but he stresses growth of pressure caused by inequality and low probability of catastrophic events that would lead again to such leveling that occurred before. Author discusses a few recipes for equalization, which mainly come down to higher level of taxation and redistribution.

I do not think that inequality is the problem per se. The real problem and thread to society is perception of inequality as result of violation of rules of fair game. I doubt that any employee of a corporation would be upset by multimillion dollars payoff to CEO when corporation is doing great, employee’s job secure, salary is growing, and pension fund promises nice retirement. It is become an explosive problem when the same payoff coincides with company downsizing, employee loosing job, and pension fund going down the drain. It is obviously correct that all kinds of disasters cause leveling, but to look for disaster to heal inequality is like trying to rid of headache by putting bullet in the head – headache would go away, but so would live. In short I do not believe that taxation and welfare are good remedies either because government redistribute resources any inequality is magnified in minds of people, so inequality of getting 5 pounds of bread when everybody gets only one pound is much higher that inequality of CEO making a million when everybody else makes on average 50K. That’s how disasters of revolution start. The only known way to avoid it is implement relative equality of opportunity or at least promote believes that it exists.