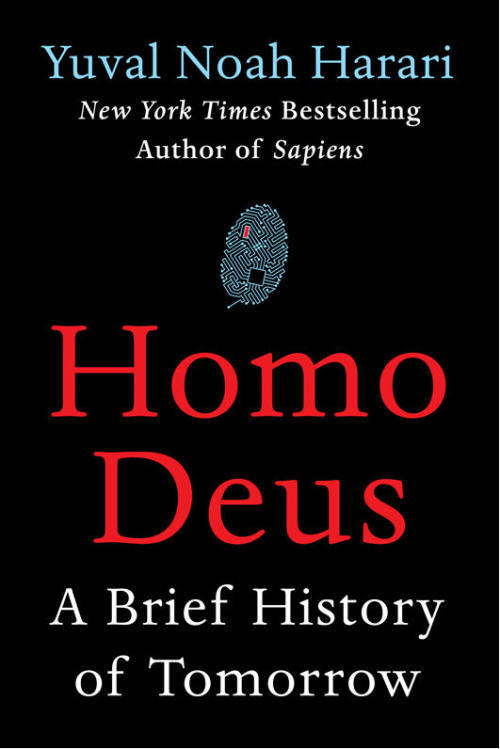 The main idea of this book is that technology is changing society and environment in such profound way that current philosophical notions that were built into the foundation of contemporary society become obsolete. Consequently it would have to lead to the huge restructuring not only of societal organization, but also of individual consciousness leading to some new and unimaginable arrangement of individuals, societies, environment, and connections between them all.

It starts with the statement that humanity achieved such level of development that it now can move from the main question of survival, to the much more interesting question: what to do with ourselves. In this chapter author looks a bit back at the biological poverty line below which humans could not survive, pathogens and other evolutionary pressures that kill humans by disease, wars and other forms of violent competition that humanity seems to be in process of finally overcoming. This follows by discussion of death and the new development when technology could possibly make it outdated. So the key issue is what is happiness and how to assure that everybody has right to happiness and actually capable to achieve it. In order to clarify his points author provides a nice analogy from the history of grass lawns, which used to demand an extraordinary amount of effort to maintain and therefore were a subject of competition between feudal lords to demonstrate their fitness. Now due to technological development a lawn become a simple part of American middle class live. At the end of this chapter author provides a general plan of the book.

This is obviously about era of humanity that started about 70000 years ago. There is a nice pie chart to demonstrate it purely by super simple measure of weight: 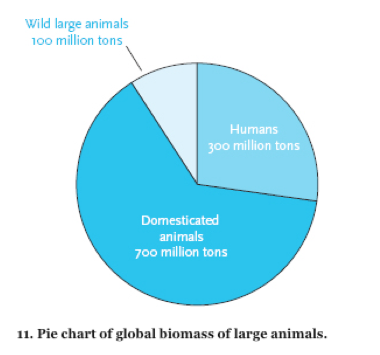 Author looks at ancient animalistic believes and then jumps to human use of other animals, which, while satisfying their minimalistic needs for survival, actually deprives them of natural habitat. Example provided: pigs in industrial environment. Next author discusses organisms as algorithms providing for the survival and genes transfer to the next generation. The rest of chapter is comparative analysis of agricultural and industrial ages, their ideological underpinning and similarity.

Here author starts with human morality, which claims to be universal, but in practice is quite hierarchical on many levels with humans higher than pigs, but Americans higher than Afghanis. Author also discusses here Darwin and Evolution, which left humanity without soul. This logically leads to discussion of mind/ brain, live / non-live, and self-conscious / lack of it. Author looks at these philosophical issues using a bunch of nice examples from live of chimps, talking horse, lab rats, and communist dictatorships. Probably the most important in this part is a small piece on the Web of meaning – how people create and maintain social reality that only tangibly relates to objective reality.

This is a brief discussion of humans as storytellers with initial look at history of storytelling and then switch to exclusively human ability to create permanent storage of information outside of human brain, specifically on paper and other devices. Moreover the stories and information on paper become so powerful that it could decide issues of live and death as illustrated by the story of Portugal consul in France who saved thousands of Jews by issuing passports (pieces of paper). Another, even pore powerful example, is Holy Scriptures that moved to actions and defined lives of billions of humans. The final point that author makes is that he believes that in future even more powerful stories will be created and they will have even more force to move people and define arrangements in the societies.

This is about stories told by religion and science, which both are based on complex combination of truths and myths. One important point here is that religion is a tool for preserving social order, but so is the science, at least to the extent in supports social order. Author tries to put all this in order and provides a nice summation of religion as combination of three parts:

Overall, both religion and science are trying to provide truly correct representation of reality, but they use different method and obviously come to different conclusions. Author perceives contemporary perception of the reality as combination of science and one particular religion called humanism. These two approaches constitute mutually supporting covenant still effective, but more and more coming under pressure and seems to be moving to disintegration sometime in near future.

This is detailed discussion of modern integrated science/humanist worldview. Interestingly enough the author starts this discussion with bankers and credit with interest – true engine of economic expansion specific for humans and not used by any other animals. From here he goes into discussion of economic pie that is growing if conditions are right and ecological problems that he considers the most probable reason for collapse of civilization. Dutifully regurgitating typical anti-capitalist ideas of market failure with, also typical, somewhat positive reference to market, author states that the salvation from capitalist horrors came from the new religion of humanism.

This chapter retells history of humanism from its beginning to the present time. The humanism itself defined as religious believes in humanity as substitute of god(s) with humanity giving meaning to the universe. Author provide an interesting formula for 3 different approaches to understand the world:

This discussion includes quite interesting look at the representation of War in Art and how it changed with the development of humanism from stressing role of the leader to stressing role of individual member of masses. Author also looks at different branches of humanism: Nationalism, Evolutionary humanism, Socialism, and Democracy. All these branches in one combination or another were at war with each other for the most part of XX century, but now, at the beginning of XXI century the winner is combination of human rights, democracy, and free market. Author discusses current resurgence of Islam and religious war initiated by its adherents, but he does not consider it as a serious challenge. Much more challenging is combination of technological developments such as Automation, Artificial Intelligence, genetic Engineering, and others that taken together could lead not only to dramatic changes in the society, but to complete redesign of humans into something new and, probably not even comprehensible to us, superior entities.

8 The Time Bomb in the Laboratory

This starts with discussion of the philosophical problem of free will and all kinds of manipulation and conditioning of people by training and other forms of external influence. Then comes currently quite popular discussion of non-existence of individuality as something integral to the person. Finally author goes into a brief discussion of the meaning of the live ending with conclusion that current duality of popular scientific philosophers, who accept contradictory notions of self-direction and absence of self at the same time, being not sustainable.

This is about human losing their value and that’s how author presents this idea:

Therefore the direction of humanity seems to be growing division into 2 classes: useless masses and small superhuman maybe even immortal elite.

10 The Ocean of Consciousness

This is about nature of consciousness and probability of emergence of new techno – humanistic religion pursuing merge of all consciousness into one entity inclusive of all possible mental states as presented in diagram: 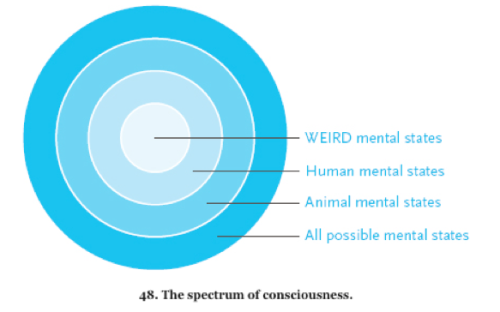 This is a description of one such techno-humanistic religion: Dataism. This is worshipping of Data with notion that the universe is just as collection of data flows. At the end author identifies 3 processes that overshadow all other problems and developments:

I also believe that the world is going to change quite dramatically due to completely new environment created by AI and many other technologies that will make humans redundant for all kind of economic activities. However I would make a very important point that there is only one entity that will always define objective of all these activities and it is a human being. All kinds of activities occur only because humans need product of these activities whether this product is food or poem and this directional role is going to remain human domain. It is quite conceivable that in a few years we can create computer program that will perceive itself as person and will act correspondingly. It does not matter; it will still be human even if it would not be based on DNA and organic material. It could have no other existence than a bunch of electronic impulses, but it will have memories, experiences, self-recognition, and all other quality that makes us human. However I doubt that it would go beyond experimental because there is no point of replicating humanity in other forms. As to body and mind modifications in order to become superhuman, it also does not make a lot of sense because with all external capabilities of technology who needs super muscles if one can use car or plain or heavy moving equipment? Similarly who needs super brain if Internet is always available and computer could calculate or analyze whatever needs to be calculated or analyzed. In short I think we humans will remain the way we are, may be just changing body at will and ridding off illnesses, death, and other unpleasantness of life. On other hand, who can prove that we now are not just impulses in some kind of computer, modeling human personalities for some second grade kid doing his homework?