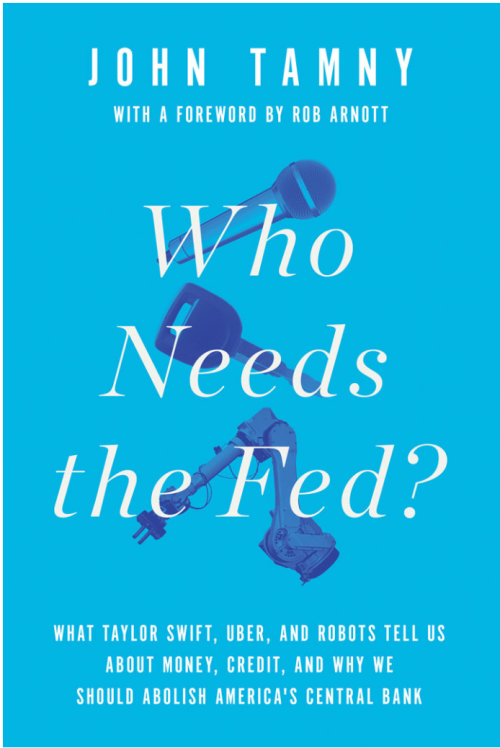 The main idea here is to explain and demonstrate that Fed existence is not helpful, but rather detrimental to efficient functioning of economy because it cannot effectively fulfill its function to control money supply.

The first chapter uses example of Uber dynamically changing rate for taxi after popular concert, consequently providing ability to meet demand that was properly decreased by higher price. The point here is to demonstrate that it is not possible establish best price from outside and that this general rule of economics applies to the price of credit that Fed supposedly controls.

This chapter uses sport to provide example of inefficient use of capital. The lesson here is that entrepreneurs are human and as such make mistakes leading to failure and economy has a tool to clear up consequences of such failure – recessions. The point here is that recessions are not market failure, but rather an act of maintenance of the system, necessary to keep it in good shape.

THREE In Hollywood, the Traffic Lights Are Almost Always Red

This chapter uses Hollywood to demonstrate actual independence of credit and credit rates from Fed, mainly by pointing out that popular actors believed to have potential to produce blockbuster in their next movie have no problem to get vast amount of credit at low rate regardless of economic cycle, while actors who failed could not get credit at any price.

FOUR In Silicon Valley Your Failures Are Your Credit

This is extension of credit cost irrelevance discussion based on example of Silicon Valley where credit is relatively plentiful because huge potential return. The failure here is celebrated as necessary step in acquiring experience that will lead to future win, even if it has a significant feel of lottery in it.

FIVE Did You Hear the One about Donald Trump Walking into a Rank?

This chapter uses examples of Donald Trump and Michael Milken to present idea that the real private credit has overwhelming dependency of character and history of creditor.

In this chapter author is moving away from private credit to state interference in credit and uses example of Bernanke and Paulson to demonstrate how government’s violent interference creates huge redistribution opportunity for individuals in possession of intimate connections with and knowledge of bureaucratic hierarchy.

This chapter presents somewhat unusual proposition that supply side economics actually empowers government distortion of economy and misallocation of resources as it is embodied mightily in Hillary’s personality and ideas. The logic here is simple: supply side decrease taxes resulting in increase in government tax revenues as consequence allowing government spent more to bribe more constituencies and increase its power.

EIGHT Why “Senator Warren Buffet” Would Be a Credit-Destroying Investor

This chapter makes another important point to demonstrate necessity of failure. It uses Warrant Buffet and his relatively low rate of capital misallocations to demonstrate that private market feedback allowed for quick reaction in reallocation resources away from unproductive use. If Buffet were a senator there would be no reason for him to react quickly, moreover political resource allocation always includes supporters who receive these resources, therefore reallocating resources to more productive use would cost senator Buffet support of people and would have negative impact for him, while similar reallocation for private investor Buffet would be positive for him by preventive loss or providing bigger gain.

NINE The Credit Implications of the Fracking Boom

This chapter initially discusses complexity and necessity of division of labor (“I, pencil” and similar) and then applies it to credit in fracking industry. The point here is that for global economy credit for fracking is net loss because there are plentiful other reserves of oils that are profitable with traditional and much cheaper technology. Author points out stability of oil price in gold and relate its variation in dollars to political manipulation of dollar. His point is that USA president always get dollar he wants, but gold it constant.

The final chapter about the Credit summarizes author’s ideas that credit is nothing more than tool of resource allocation and any government interference in this allocation is really just a tax that moves resources away from productive use. In these terms supply siders who decrease tax rate consequently increasing economy and with it tax returns are guilty in transferring more resources to government bureaucracies to waste.

Here author uses example of air rental company NetJets to demonstrate that credit represents real resources and exists outside of banks and feds activities that change money supply. The point is that if one just creates money by fiat and gives it out as credit, this credit would not bring in resources if they do not exists. Since money nothing more than facilitator of credit such fiat would only lead to impediment of real economy.

TWELVE Good Businesses Never Run Out of Money, and Neither DO Well-Run Banks

The point of this chapter is that good business can always get necessary credit as long as creditors believe that it is good. The same applies for banks therefore government demand to keep a share of deposits as cash are meaningless for good banks and would not prevent bad banks from failure.

THIRTEEN Do We Even Need Banks?

This is reference to advance technology that allowed for credit cards and then for crowd financing such as Kickstarter. These developments make banks somewhat outdated. The inference here is that we do not need banks in their current form and they could survive and maintain relevance only if government gets out and allow them compete with all other forms of credit.

FOURTEEN The Housing Boom Was Not a Consequence of “Easy Credit”

This is discussion directed against idea that Housing boom was caused by easy credit. Author repeats his point that monetary credit just represents resources and as such could not increase or decrease their amount, so the crisis occurred mainly to weak dollar policy.

FIFTEEN Conclusion: Why Washington and Wall Street Are Better Off Living Apart

The final conclusion of this part is that close link between banks and government distorted working of economic system in such way that banks got to care about only one customer – government, neglecting all others and it led to gross misallocation of resources.

This chapter is directed against monetarists. The main point here as elsewhere in this book is that money is just a measure of resources and does not really have any serious impact on resources exchange. As example author uses Baltimore where non-productive welfare recipients would not get better if additional money supply increase their demand because they do not produce anything so this demand would not stimulate Baltimore. In addition to Keynesian solution author rejects gold standard as being far from ideal and suggest that the best way would be to leave money creation to private market where multiple currencies could compete and the most stable and liquid would win.

SEVENTEEN Quantitative Easing Didn’t Stimulate the Economy, Nor Did It Create a Stock-Market Boom

This chapter is discussion directed against Quantitate Easing arguing that government should not use political methods to stimulate spending. The main point here is that QE based on the strange idea that could be buyers without sellers and borrowers without savers.

EIGHTEEN The Fed Has a Theory, and It Is 100 Percent Bogus

This is discussion about Philips curve and another strange believe that economic growth causes inflation and it is somehow connected with decrease in unemployment, so by inflating money Fed can decrease it. Author believes that this idea is 100% wrong because it does not account for global character of the market and, most important, for continuing increase in productivity.

NINETEEN DO We Really Need the Fed?

The obvious answer is clearly “No” for reasons exemplified by Taylor Swift and Barney Madoff – credit is something that borrower already has either as marketable collateral for loan or human capital that represents high probability of future cash flows. By definition Fed function is monetary intervention into market to control inflation and unemployment, which according to author and the last hundred years of history, could not possibly work.

TWENTY End the Fed? For Sure, But Don’t Expect Nirvana

Here author again briefly going through history and discussing Fed’s failures, but he warns it is not really Fed, but government spending that causes the problem and Fed just facilitate this spending.

TWENTY-ONE, Conclusion: The Robot Will Be the Biggest Job Creator in World History

Interestingly enough the concluding chapter is about robots and their impact. Author rejects the idea that robots would push humans out of productive activities and crash economy. He looks at them as dramatic enhancement of productivity making resources and correspondingly credit abundant and therefore giving humans tremendous entrepreneurial opportunities.

I find the author’s idea that credit is not money, but rather representation of resources pretty compelling and his critic of Fed as mainly harmful blunt instrument generally used to hurt economy mainly correct. I think that idea of private money theoretically interesting, but misses a very important issue of transaction costs: any individual on the market would have to spend unordinary amount of time and effort researching validity and efficacy of currency for transaction. I would suggest another solution: to keep Fed as currency insurance tool that could be financed by currency issuer and would provide currency stability insurance on transactional basis. The government involvement here is necessary because its coercion and violence is necessary tools to get access to full information and limit cheating. As for robots as credit enhancers that would just add to human productivity rather than put humans out of work, I think author makes mistake by overestimating human propensity for productive activity. A significant number of individuals, if not the majority would prefer do nothing or pursue completely non-productive objectives if left alone and deprived of external force that makes them to sell labor for living. I really do not think it is a huge problem, but if not taken care of by establishing mechanism of resource allocation for such people, it could become very dangerous source of tension in society.