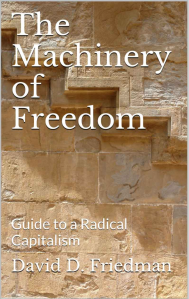 The main idea of this book is to present consistent set of libertarian approach to practically all main functions of contemporary society and demonstrate how this approach could leads to much better society than we live in now. The key foundation of this libertarian approach is private property and use of privately controlled entities to fulfill all functions that currently done by governments not only in economic, educational, environmental, safety net, and similar areas, but also in area of use of violence necessary to protect country, maintain order, and support effective legal system.

Part I: In Defense Of Property

This is a brief review of meaning of property and its link to human rights. Basically it is about human rights to property. It also reviews notions of public property versus private property and different forms of property from land to airways. It also looks at market as a place for property exchange and government interference with exchange and other activities, consequently reviewing socialism as a system of coercion incompatible with human freedom that necessarily includes uncontrolled behavior and free exchange..

Interlude: This is a brief note noting that reality is always different from theoretical analysis. In theory one can talk about pure private property vs. public property when in reality everything is always mixed in unpredictable proportions.

8.Exploitation and Interest: This is a brief discussion of Marx’s theory of value and consequently critic of idea of exploitation with derived notion of unfairness of inheritance tax.

Part II: Libertarian Grab Bag Or How To Sell The State In Small Pieces Paranoia

This group of chapters is about tendency of capitalism to fill up for multiple deficiencies of real socialism of XX century. It uses example of Czechoslovakia to demonstrate how it happens. It also discusses how socialism fails in different areas and, very important, it states that capitalism does not impose any restriction on people who want socialism except preventing them from taking property and lives of people who do not want socialism. After all millions of socialists and sympathizers can combine their property, set up whatever organization they want to and live according to their ideas.

These chapters present discussion about hypothetical libertarian society where everything including violent organizations of army, police, and legal system are in private hands and ruled by free market rules. Also is discussed a strategy of transfer from current society to libertarian one.

This is continuation of review of fine points of libertarian position on implementation of substitutes for government functions of violence and economic control via money supply with libertarian solutions based on private property right.

This is brief discussion about link between welfare and immigration: the best approach is unlimited immigration on condition that welfare state is dismantled.

These chapters somewhat repeat earlier discussion on necessity of government for control of use of common goods like roads and attempt to demonstrate that libertarian society could handle this and no government would be required for this.

This chapter is about author’s highly successful experience with educating and training his children at home.

The final chapter presents author’s hope that libertarian order will be achieved sometime in the future and the world of strong property rights, minimal to non-existing government, and free market is eventually coming on the long run.

I consider myself rights libertarian so my main difference with author is limited to private property – author believes in its sanctity, while I believe that property is just effective and efficient mechanism to control and use resources based on violence and coercion and as such has no sanctity whatsoever. However being the best mechanism invented to support human lives and society of humans, private property need a small enhancement in form of equal rights for natural resources for everybody so an actual property owner who controls property in amount more than average would have to purchase rental rights for such excess from people who own and/or use less. This enhancement removes the reason for welfare state, which legitimacy comes from need to support people who are propertyless and unable to make living by selling labor, because with equal rights for resources nobody is propertyless.

Another significant, but much less important difference is that author believes in viability of private army, police, and legal system, while I believe in necessity, of government in possession of overwhelming violent power capable to suppress any competition. I think that democracy in conjunction with bureaucratization of violent organizations of army and police when individual leaders could not obtain effective control over these organizations proved to be quite sufficient mechanism capable to prevent coups and use of violence in order extract rents directly. In my opinion multiple private armies and police organizations would be less effective in protection from external threat and prone to fights between themselves. Other than these issues I agree with just about everything in this book.