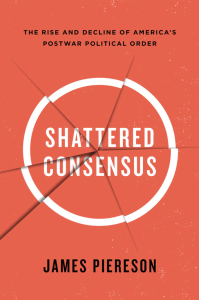 The main idea of this book is that America throughout its history went through 3 major revolutions each of which dramatically changed society despite mainly retaining formal features such as constitution and democracy. The first revolution was the triumph of agricultural democratic republic of Jefferson over mercantile republic of Hamilton in 1800. It established dual agrarian democracy based on uneasy union independent farmers of the North and plantation owners and slaveholders of the South. It lasted for 60 years and was destroyed in bloody Civil war (the second revolution) when contradictions between sections of the union exploded and led to conquest of South by the North. The consequences of this revolution destroyed slaveholding agricultural south and opened way for industrialization, pushing into secondary role independent farmers f the North. The development of following 70 years brought into play two new dominant forces: industrial capital and hired labor. The tension between these two forces came to the boiling point in 1930s as result of great depression and were resolved by the 3d revolution: New Deal. This revolution brought in new powerful force – ideologically liberal government bureaucracy, which to high degree subdued both labor and capital and established control over the country. This arrangement seems to be falling apart under weight of government regulation and increases in power of bureaucracy that created unsustainable welfare state and limited productive abilities of the country. Author believes that we are on the brink of the 4th revolution, which will resolve this crisis, but he does not know how it would be resolved.

The introduction presents this book as analysis of change in American political landscape that moved from general consensus between two main political parties on Keynesian approach to economy, growing welfare state, increases in government regulations, and resistance to Soviet communist expansion to two widely polar views with Democrats moving far to the left especially in international and security issues all the way to accommodating anti-American Islamic theocrats, while republicans moving to the right in economic issues away from Keynesianism to free markets, much stronger security posture, including actual wars if necessary. More important the whole population seems to be broken into two camps with levels of hostility unseen for a long time. The main point authors made is that old consensus does not exists anymore and we are at the brink of huge changes comparable with Civil War and New Deal in the scale of its consequences.

PART I. THE POLITICAL ECONOMY OF THE POSTWAR ORDER

This is retelling of Keynes’ story and main ideas of his work that pretty much came down to notion that free markets failed because economies become too complicated and only wise government management remediating these failures could save capitalism from its deficiencies.

In this chapter author reviews real live history of implementation of Keynes ideas over 75 years. Initially it was seemingly successful, creating illusion of control over economy, but eventually it failed bringing us deep recession that is currently moving into secular stagnation. Interestingly Keynesian era lasted 75, approximately the same as preceding it Laissez Faire era.

This is analysis of attempts to use New Deal as metaphor for contemporary period circulated by Keynesians who still fail to accept reality of real New Deal failure to restart economy and continue crediting it with after war boom that was in reality created by need to restore economies in countries nearly completely destroyed by the war. As soon as recovery was accomplished by early 1970s, a Keynesian policy led to stagflation that was overcome only by ‘s market revolution of 1980s.

4.American Capitalism and the ‘Inequality Crisis’

This is look at inequality “problem” popularized by occupy movement and supported by Piketty analysis of income distribution between labor and capital.

The final chapter of this part analyses current economic and political situation in America with its polarization of various group of population many of them rent seeking and/or redistribution oriented. In author opinion situation is clearly developing in direction of 4th revolution that would radically change American society similarly to changes brought in by previous revolutions:

As usual in such situation at the brink of next 4th revolution it is absolutely unpredictable what will be next. The only clear thing is that it is not going to continue as it is now.

This is about apex of liberal ideas achieved in 1960 when just about everybody was Keynesian in economics, liberal supporter of anti-poverty programs and racial quotas, feminism, and radical changes in culture. Even conservatives supported all of this, albeit claiming that they would be better managers of welfare state. After the small scare of McCarthyism in late 1940s liberals practically won ideological struggle, eventually moving to establish any non-conformism as expression of irrationality and defining republicans as anti-intellectual “stupid party”.

This 2 chapters designed to refute ideas that either Liberalism or Conservatism is dead periodically popping up every time when one or another side has significant improvement in its electoral standing. In reality country is deeply divided with 1/3 of population mainly more productive people receiving a lot less from government than they lose to government intervention moving to conservatism, 1/3 of mainly government provided rent receivers and seekers moving to liberalism, and 1/3 of people with lower productivity level and significant share of resources available to them being provided by government continuously vacillating between two sides. So far both movements are alive, well, and demonstrated remarkable ability to bounce back after electoral defeats. Nevertheless the depth of separation growing and both sides are working hard either to increase productive opportunity for people in the middle for conservatives, or increase amount of government supported resource transfer to their clientele for liberals.

This is story of conservative movement, which being pushed out from officially supported intellectual positions of influence in mass media, education, academy, and arts, developed separate parallel intellectual infrastructure in think tanks, independent foundations, talk radio, cable TV and local political structures of republican party. Eventually conservatism moved from outside into mainstream of political debates with huge support from liberal politicians who consistently provide examples of complete failure of vast majority of their attempts to implement liberal idea in real life.

PART Ill. THE KENNEDY LEGEND AND THE LIBERAL IDEAL

This part is dedicated to John Kennedy, his presidency, and liberal idolatry build around this story. It also restates amazing story of myth creation in which noble liberal Camelot was cut down by evil environment of America saturated with right wing conspirators. Author believes that this myth was a spark that ignited fire in the belly of liberal movement forcing it push ahead with major changes in American life. Never mind that by usual measurement Kennedy was quite conservative in this ideology and action, being democrat mainly due to his background as Irish Catholic. It is also discusses an amazing feat of ideological myth building when liberals managed to hung blame for Kennedy’s assassination on right wing, despite the fact that killer Oswald was far left individual with history of worshipping Castro and defecting to USSR.

This part is about leftists taking over American universities and turning them into indoctrination centers of liberalism. It retells in details the story and positions stated in famous book by Bloom “Closing of American mind” published in 1987. In the following 30 years this process moved a lot further turning not only university, but the whole educational system run by government into ideological bastion of leftism, protecting prosperity of credentialed individuals within this system by turning young people into foot soldiers of democratic party.

Left, politically represented by united, under Obama Democratic Party, which main objective is expansion of predatory government and limitation of all economic and political freedom for everybody else.

Right, politically represented by Republican Party more or less combining traditional conservative wing and libertarian wing both of which mainly agreed on policy promoting decrease in size and influence of government in economy, but divided on government role in culture and values.

Author believes that the most probable outcome would be the next fourth revolution when one of these two camps win decisive victory forcing another camp to accommodate their positions to the new secondary role similarly to what happened in 1930s with New Deal.

I mainly in agreement with ideas expressed in this book and find framework of periodic revolutions quite plausible. The consensus of New Deal that prospered after the war is dead as well as Keynesian understanding of economy, and socialist ideas of government control over production. However I would expand the view of crisis from America to the whole world and would call it crisis of capitalist method of production based on government or business control over resources and labor sales by individuals situated outside of government bureaucracy and business managing hierarchies. This crisis caused by progress in communication, transportation, and data processing brings the whole world into one global market and increasingly makes human labor redundant for production of goods and services. I think that the revolution resolving this crisis is bound to occur in America and then expand itself throughout the world moving it into much more libertarian place than it could be imagined now. I think that preceding this revolution would be restructuring of the Right wing ideology in such way that would bring wide masses of middle class to their side by providing feasible alternative to limited government support of their needs. As soon as this restructuring completed, the 4th revolution leading to newly energize, highly productive and inclusive capitalism would be unstoppable. The alternative scenario of consolidation and victory of the Left wing ideology seems quite unfeasible to me, mainly because this ideology could not possibly satisfy deeply seated human needs for self-control, self-direction, and pursuit of happiness, even if at current levels of productivity it could satisfy minimalist needs in food, shelter, and entertainment.