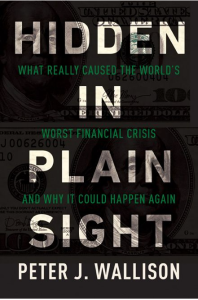 The main idea of this book is that financial crisis of 2008 was produced by government intervention in economy. The prerequisite for it was first of all government push to expand home ownership via political methods by legislating “affordable housing” and then setting up goals for lending to people who traditionally would be considered unqualified for loans and forcing banks to meet these goal and GSE to buy loans to such people using dramatically decreased underwriting standards, consequently developing housing bubble. The secondary prerequisite was the change in accounting rules requiring to price assets to market that made assets dependent bank reserves highly volatile and dependent on housing market valuation. The crisis itself was caused by inconsistent reaction of government to manageable problems of investment banks created by liquidity crunch resulted from drop in housing prices. The initial rescue of Bear Stearns and following up refusal to rescue Lehman created huge gap in abilities to predict financial developments for financial managers, causing them to froze credit and run to liquidity in order to avoid bankruptcy.

1 Introduction: What Really Caused the World’s Worst Financial Crisis and Why It Could Happen Again

The left worked hard to build false narrative about financial crisis of 2008. This narrative blames deregulation for causing the crisis. Author rejects this idea and points to actual causes:

2 The Difference between Prime and Nontraditional Mortgages: The Importance of Sound Underwriting Standards

Here author discusses traditional prime mortgages: 20% down, FICO >660, and DTI (Debt to Income) < 38%. He provides very enlightening table of default percentage in relation to variation of these parameters with Prime default rate 0.55% and Subprime from 0.98% to 7% depending on combination of subprime parameters.

This is about work of commission to analyze crisis that author participated in and reasons for his rejection of the report and other alternatives for causes of crises:

This is a brief history of American housing market after WWII that was very stable and successful until 1992 when housing bubble started to develop. Author blames growth of bubble on government intervention aimed to expand house ownership among unqualified people that started with Community reinvestment act.

This is about HUD as a tool to implement government policy of affordable housing that was implemented via % goal for banks and GSEs. Author provides graph demonstrating cumulative increase in subprime loans and growth of prices: 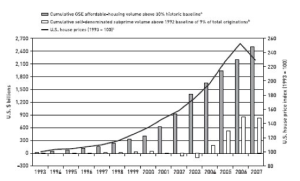 6 The Decline in Underwriting Standards: How the Affordable-Housing Goals Forced on Increase in Nontraditional Mortgages

This chapter describes process of political interference into mortgage market and how it caused decline of underwriting standards. The table below demonstrates increase of low quality loans on GSE’s books: 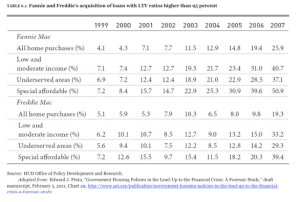 7 Force Fed: Why the Affordable-Housing Goals, and Not Market Share or Profit, Were the Sole Reason the GSEs Acquired Nontraditional Mortgages

This is detailed discussion of GSEs as political creatures. This nature defined GSE priorities when meeting political goals was much higher priority than any market related considerations. It is also provides logic of why any claims for GSE working to maintain market share are plainly incorrect.

8 Going Viral: Why and How Reduced Underwriting Standards Spread to the Wider Market

This chapter discusses how GSE behavior impacted wider market. This influence in combination with political pressure on banks practically forced non-government organizations follow suite. Here is the graph for this: 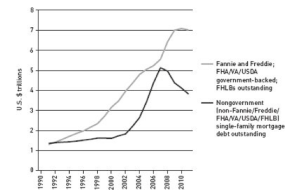 There is also a very interesting table from Freddy presenting ratio of default for various deviations from prime conditions: 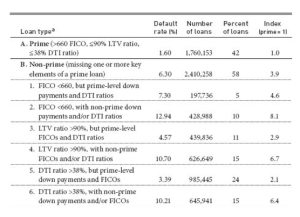 PART III: THE FINANCIAL CRISIS AND ITS ACCELERANTS

This chapter discusses overall nature of bubble and specifics of USA housing bubble of 2008 claiming that reason of unusual scope of this bubble (9 times bigger than any previous one and global rather than local) was political interference to dramatically decrease underwriting requirements and with it amount of money flow into mortgage market.

10 Flying Blind into a Storm: How the GSEs’ Failure to Disclose Their Acquisition of Nontraditional Mortgages Magnified the Crisis

This chapters describes various statistical and accounting technics that made growing bubble practically invisible for decision makers in both public and private sectors. Mainly it was done via classification of subprime loans as prime often using previous GSE criteria for loan purchases that were not operational any more in reality.

11 31 Million Nontraditional Mortgages Precipitate a Crisis: Why Even Government-Backed Mortgage Securities Were Contributors

This chapter discusses volume of bubble and some additional reasons for people missing it. First and foremost it was caused by dramatic inflation of housing prices that masked the problem by decreasing levels of defaults and delinquencies due to use of equity loans. It lasted as long as prices kept going up. As soon as prices stopped individuals with unaffordable loans stopped paying and bubble burst.

12 Fair-Value Accounting Scales Up the Crisis: How Mark-to-Market Accounting Made Financial Firms Look Weak or Unstable

This chapter discusses another precondition for financial crisis – switch to Mark-to-market accounting. It comes down to simple notion that bank reserves in form of marketable assets are highly vulnerable to price movements for these assets causing dramatic decline in reserves if price dropped significantly. With significant share of reserves tied up in housing related assets, burst of bubble immediately undermined liquidity of reserves of otherwise healthy institutions, pushing them into bankruptcy.

PART IV: FROM BAD TO WORSE

13 From Bad to Worse: How Government Blunders Turned a Mortgage Meltdown Into an Investor Panic and Financial Crisis

Here author presents crises development as consequence of government interference / noninterference that started first with unnecessary rescue of Bear Stearns that created market expectation for government interference on behalf of any significant player. As result management of Lehman brothers based its strategy on this assumption and did not apply emergency efforts to stop deterioration of liquidity position due to mortgage asset devaluation to market. The result of this strategy opened Lehman for bankruptcy and, when expected government interference did not occur, Lehman went down. The unexpected inaction of government practically froze credit everywhere because everybody recognized liquidity situation caused by the burst of bubble and nobody knew what expect from government. Author analyses in details all reasons that where provided for this interference / noninterference and concludes that these reasons are not valid.

14 The False Narrative and the Future: Why the Failure to Understand the Causes of the Crisis May Lead to Another

The final chapter discusses various false narratives provided to justify government action and assign responsibility for crisis elsewhere. It provides support for author ideas that these false narrative prevented effective learning from this experience and left open road to the next crisis that could occur for the same reasons as the last one: government push for increase in landing to political constituencies that could not and would not pay their debts in the future. It remains to be seen if this next attempt to sabotage American economy will be as successful as the previous one.

I found evidence provided by author and his logic very convincing and sequence of event leading to crisis highly feasible. Bubble burst causing decrease in mortgage related assets prices in turn leading to reserves liquidity crunch as result of mark-to-market accounting accompanied by Feds rescue of Bear Stearns and refuse to rescue Lehman made behavior of managers who froze all the credit logical and justifiable. I also think that his critic of various alternative justifications and explanations looks pretty robust and well documented. However I do not share fear of the next crisis developing in similar way mainly because it would require the same political approach based on liberal ideology and implemented by two consecutive presidents Clinton and Bush. I think that political power is going to shift and quite dramatically making repetition of crisis with the same causes unlikely.