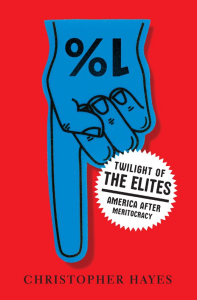 The main idea of this book is pretty simple: American society was built on idea of meritocracy, but it led to creation of elite that now controls just about everything. This meritocratic elite created the huge inequality of income, wealth, and opportunity between its members and everybody else, causing degradation of society institutions and disappearance of equality of opportunity. The remedy that would resolve the problem author sees in government action to increase equality via taxation and control over population, prompted by popular insurrectionist movements such as Tea parties and Occupy Wall Street. He believes that it is a natural process of dynamic democratic society and that result will be the new era of equality.

Chapter One: THE NAKED EMPERORS

This chapter starts with the sentence: “America feels broken” and continues through laundry list of what is had been wrong with America lately from TARP and financial crisis to the way Americans feel about their life, stressing that this feeling of things going wrong is common on the left and on the right of political specter. It also demonstrates author disappointment with Obama administration as too cautious and too deferent to authority. Author perceives Obama’s rise as triumph of meritocracy at the time when Americans trust in institutions of society hit the all time low (How somebody can see meritocracy in a product of affirmative action is beyond my understanding). Consequently author identifies two types of attitudes to this calamity: insurrectionists and Institutionalists. The former believe that institutions of American society are broken and should be drastically changed; while the latter believe that these institutions just need some repair and maintenance. Author stresses that this situation occurred at the same time when American ruling elite changed from narrow group of WASPs to narrow group of individuals selected on the merits of their achievement – product of meritocratic rule established as result of anti-establishment revolution of 1960s. Finally author stresses his dual attitude to situation when he supports insurrectionist ideas, but afraid that big changes could go in direction that he would not like. On the top of it he seems to be just plain scared that the only institution that Americans still trust are army and police – not a good thing for a leftist revolutionary.

Chapter Two: MERITOCRACY AND ITS DISCONTENTS

This chapter is about meritocracy in America as foundation of its culture and American Dream. It is discussed using example of highly selective Hunter school in Manhattan – well-defined road to top colleges and correspondingly top-level career. Author himself is the alumnus of this school so he presumably knows what he is talking about. Then author moves to social theorist Robert Michels who concluded that democracy is not practically possible because it always moves to oligarchy, when meritocratic leaders, elected or not, take over control of the state machinery and do whatever they want. So in order to remain in realm of democracy meritocracy has to comply with 2 principles: Principle of Difference and Principle of Mobility, assuring continuing competitive selection process. The problem is that unequal outcomes make equal opportunities impossible because winners create better start up opportunities for their children. Author believes that it pretty much happened in America by 2012 due to inequality of income, despite Americans’ believe that success depends more on person than on background.

It starts with description of suicidal attack on government building by self-employed consultant who was harassed by IRS because of a law created in 1986 specifically for tax break for IBM at the expense of self-employed software developers. Then author goes through a number of cases from Enron to financial crisis pretty much supporting anti-big business approaches of both Tea parties and Occupy movement and lamenting a fundamental inequality of accountability.

This chapter is about role of experts and inability of regular person to evaluate quality of expert advice. As rules of thumb for decision making author analyses tools available for regular person:

This chapter is about American elite and what it is made off. It starts with complain against right wing politics who loudly claims to be victimized by media and intellectual elite, while in reality being themselves part of elite. Then author goes into theory and literature about elite with reference to Robert Michels, Pareto, Ortega y Gasset, and C Wright Mills. Eventually author comes up with definition of sources for elite status: Money, Platform, and Networks. Finally he reviews 1% pathologies and cult of smartness typical for American “meritocratic” elite.

Chapter Six OUT OF TOUCH

This about the distance that separate elite from regular people and how it is often intentionally hidden in order either to obtain votes by politicians or assure loyalty of sports fans, or convince people to work harder in interest of corporation. It is also about these attempts more and more often falling flat and failing to achieve these goals, eventually leading to massive alienation of people from institution and creation of Tea Parties and Occupy movements. Finally author goes through list of late crises from Iraq war to New Orleans, and Financial Crisis to demonstrate how this distance makes elite fail.

In this final chapter author proposes his solution for what he perceives as failure of meritocracy in America. This solution is “make America more equal”. He identifies two “eras of equality”, one from end of WWII until early 1970s and another one from late 1970s till now. The first era was the era of manufacturing prosperity with jobs for everybody that ended with Europe and Japan recovery after the war and end of American dominance of world markets. The second era is the era of meritocratic prosperity of educated people with wide availability of education for everybody capable to succeed. This era is ending now because according to the author inequality achieved through meritocracy is bound to kill meritocracy by providing unequal opportunity to children of high achievers, making gap wider and depriving children of underachievers of equal opportunities. Author sees the remedy in grass roots mass movement forcing renegotiation of social contract and reform existing institutions to decrease inequality.

MSNBC leftist pundit wrote this book, but, somewhat surprisingly, it is directed against the elite and calls to grassroots movement to dismantle this elite. Being leftist author directs his invectives mainly against private businesses and evil deeds of republican administrations, but it is interesting to note that he seems to understand the growing instability of existing arrangements and seeks to resolve it by changing social contract in order to decrease inequality in society. He is disgusted seeing inequality created in private business when hedge fund manager earns millions by making billions of profits for the fund, but seems to be perfectly fine when politicians and/or bureaucrats spend millions of public money on their upkeep in stile in return for directing billions of public money to their friends and supporters either for increasing their wealth or for supporting their causes, which is pretty much the same. From my point of view inequality is irrelevant, but the way it achieved is not just relevant, but is of paramount concern for prosperity of society.

From here follows that public sector superrich are evil because their wealth achieved by violently robbing productive people, while private sector superrich are relatively benign because even in worst case scenario they achieved their wealth by non-violently cheating their customers, while in more usual scenario they achieved it by producing goods and services that their customers buy voluntarily.