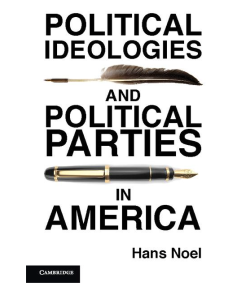 The main idea of this book is that ideologies and parties are not the same. Ideologies are coalitions of people with relatively closed set of ideas, while parties are coalitions of people in pursuit of democratically assigned political power. American society went through long process of development when ideologies grew into internally consistent sets of ideas and took over parties making them into conduits of specific ideologies and creating polarization and gridlock in that results from division of power in American system. This book is the review of this process.

This starts with introduction of two men who were not men of action, but whose ideas created foundation for a lot of political actions in XX century. The first was Herbert Croly who built ideological foundation of contemporary left progressivism and second was William Buckley who built ideological foundation of right conservatism. Author characterizes these ideologies as “Jeffersonian Ends with Hamiltonian Means” for Croly and “Standing Athwart History Yelling Stop” for Buckley. From here author goes to the main thesis of this book that ideology and political party are different and in American history mostly where not internally consistent until recently.

Here author defines Ideologies and Parties as different types of coalitions that influence each other, but include individuals with different views and approaches because they pursue different purposes. The ideology seeks to increase number of individuals adhered to its ideas and therefore necessarily purify these ideas, make them attractive, and pushes out renegades who deviate from these ideas. Political parties seek winning coalitions in order to obtain majority of voters and therefore easily tolerate deviations from purity as long as ideas are not completely subverted. Moreover political parties could and did maintain coalitions with wide variety of contradictory ideas as long as obtained power benefited all its constituents.

This chapter provides details about mechanism of formation of ideological coalitions. Author defines ideology as set of policy preferences derived from personal make up of individuals, both genetically and culturally, combined with their interests broadly understood. Author believes that ideology formed via process of Rawlian reflective equilibrium when ideology switches from deduction to induction and back to reach judgment about “right and wrong”.  He also defines “long coalition” based on preference matrix from game theory. Author also provides illustration of key features of ideologies:

This chapter is about development and change in ideology. It attempts to measure this process by using statistical analysis of correlation between various ideological issues and change of these correlations over the time. It demonstrates how the ideological positions crystallized into internally consistent set of ideas with correlation growing continuously over the time. The process is traced from the middle of XIX century till present time. This review covers hundreds issues, thousands pundits, and opinions. A very interesting list of ideological issues in discussion by decade is provided starting from1910 with analysis of how these issues were incorporated into ideological coalitions.

The next step is analysis of how ideological coalitions practically took over parties turning them from mainly partisan organizations combining various ideologies and dedicated to moving partisans into position of power into ideological organizations working to implement ideology. It also reviews development of progressive ideology as initially non-partisan ideology versus Liberalism and Conservatism.

This is review of development and politization of two issues: Race and Abortion.

This chapter analyzes contemporary polarization of American polity as consequence of ideologies taking over political parties that in turn was result of growing irreconcilable divisions between intellectuals. It has an interesting graphical representation of the process based on pundits’ ideal points changes from 1910 to 1990..

The conclusion is about implication of research results provided in this book. It looks like we’ll have relatively long period of paralyzed government because American system designed to support action only when at least some part of minority supports them.

This is an interesting review of political development of American democracy. It looks like this system went through process of development and organization from initial small time corruption mechanism when politics mainly were used to obtain access to limited power government and take away some goodies for friends and family with ideological underpinning playing relatively insignificant role, to the big and practically unlimited power government when corruption is expanded from stealing to controlling allowing politicians to implement whatever grand ideological schemes they can come up with using majority of resources available for society. At this point it is somewhat restricted by American system of division of power so highly polarized parties of somewhat equal power and representation are able to keep divided government from acting. But it will last only until one of the parties will be able to obtain electoral supremacy and start implementing its ideology on the mass scale. It is a big question whether loosing side would continue to adhere to democratic process if their ideological believes are being crashed and their way of live is being destroyed.