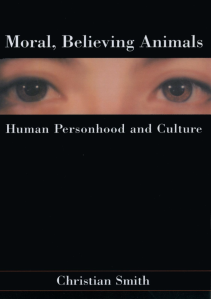 The main idea of this book is that humans are qualitatively different from other animals mainly because of their inherent need and ability to believe in some narrative and to adhere to morals derived from this narrative. This believes and corresponding morals pretty much define human actions and attitudes to each other and environment. From here follows that other theories of human nature either rational choice or structural functionalism are incorrect with most critic directed at ideas of sociobiology.

This book is an attempt to answer to question what kind of animals is humans? The main themes are theory of culture and human action, rejection of simplifications in other theories of culture, and, finally it elaborates a descriptive anthropology of personhood in attempt to understand human social actions.

Author postulates a normative approach to culture stating that humans are inherently moral animals, meaning understanding of right and wrong and continuing matching of intentions, desires, and actions against these notions. The same applies not only to individuals, but also to social institution and cultural structures. This morality is controlled by human emotions, especially by empathy and only seldom fails in some individuals who are psychopaths and generally recognized as deviation from the norm. It also goes into details of social structures defining them as a complex set of rules and resources. For examples author looks at Universities and at markets stating that they are all inherently linked to morality of any given society and cannot function without it. Author also reviews some implication of his approach.

The main point here is that all humans are believers and base their actions and behavior on unverifiable assumptions they obtain during socialization. Typically any believe that an individual has is not a subject to change by presentation of empirical facts. Sometimes it is possible to change, but it does not come easy and often feels like revelation. However the person does not cease to be believer, but rather just switch to another set of believes. Author thinks that the human characteristic of believe is responsible for variety of incompatible cultures and religions existing in the world. Also reviewed here sociological research and theories with critic that they tend to ignore or at least minimize the role of believes. Finally it touches our specific set of believes – democratic capitalism that treated as just another set of believes not that different in its nature from any other set of believes like believes of a medieval peasant or aristocrat.

This chapter is about currently active narratives with stress on idea that our current narrative based on science, technology, and such is still developed as stories and they are not only made by humans, but also make humans by continuously supporting culture that forms them. The author reviews samples of narratives such as American Experiment narrative, Islamic Resurgence narrative, Christian, and some other narratives. Then he reviews how narratives impact individual and then specifically looks in details at American Sociological narrative. The interesting point at the end of chapter is that it is not possible truly be a relativist and consider all narratives as of equal value because it is not humanly possible to overcome your own narrative whatever it is at the time. The end of chapter provides a very short overview of philosophical approach to competition, mixing, and recombination of various narratives.

This is an attempt to answer to the question what is religion? Author comes up with a very reasonable definition: “Religions are sets of beliefs, symbols and practices about reality of superempirical orders that make claim to organize and guide human life”. This follows by speculation about origins of religion

This is review of development of sociology of culture in XX century when it went from structural functionalism with its stress of leading role of culture in society and as defining factor of individual behavior through second half of century when Marxist interpretation of superstructure based on economics was main force in its turn pushed away by theories of rational choice and eventually somewhat coming back to ideas of culture based sociology that incudes much richer accounts of human life than original functionalism.

The conclusion briefly restates author’s dissatisfaction with existing approaches: sociobiology, rational choice theory, exchange theory, and evolutionary psychology all of which he considers being developed from antimentalist, noncultural traditions of Western social theory. Author restates his approach that humans are moral and believing animals and that there is intimate connection between morals and social institutions and that it impacts all actions of human individuals.

I pretty much agreed with proposition that morals and behavior are based on believes, but do not see how it contradicts either evolutionary biology or even sociobiology. As soon as we take out consideration of intelligent superior being(s), we necessarily wind up with evolutionary explanations, of which the most plausible for me is theory of dual level selection based on fitness of individual within the group and of group amongst other group. Believes and corresponding morals are dynamically changing sets of memes that are continuously invented, reinvented, survive or perish with individuals and groups carrying them. Sometimes the survival of individuals and groups depends on their ability discard existing believes and accept new ones that better support their survival at the moment. The great example of dramatic and massive changes in believes and consequently morals provided by history of Islamic conquests, probably the most consistent violent expansion of ideology in history.