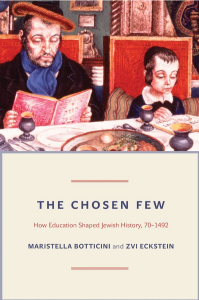 This is research based on economic and demographic data that tries to explain reasons for unusual behavioral and vocational traits of Jewish population of the world. The explanation seems to be found in specific features of Jewish religion that are based on literacy and numeracy as religious duty even if it is costly and economically unjustified, except for psychological satisfaction that some individuals experience from process of learning and ideological discussions. The point is made that such individuals choose to remain Jews while other individuals who did not experienced comparable psychological returns choose to convert to other, less demanding religions. Consequently on the long run over period of hundreds of years this choice made Jews into self-selected group based on propensity to learn and therefore well prepared for explosion of market for high cognitive demand professions, successful and prosperous, but highly dependent on this market.

The first chapter gives overview of Jewish history and provides a list of relevant factors:

Contrary to the common understanding, Jews for the main part of their history were not restricted in their economic activities except for participation in government bureaucracies. The typical Jewish trend to go into high cognitive demand fields was an individual choice of majority of individuals. Author reviews various theories of why it happens either due to exogenous or endogenous factors and concludes that none of theories provide satisfactory explanation of known historical facts.

CHAPTER 3: The People of the Book, 200 BCE-200 CE; The Two Pillars of Judaism from Ezra to Hillel (500 to 50 BCE): The Temple and the Torah; The Lever of Judaism: Education as a Religious Norm; The Destruction of the Second Temple: From Ritual Sacrifices to Torah Reading and Study; The Legacy of Rabbinic Judaism: The Mishna and Universal Primary Education, 10 CE – 200; Judaism and Education: The Unique Link in the Worm of the Mishna

This is a story of how Jewish religion becomes tightly connected to literacy and how education becomes a religious duty. It starts with Judaism loosing one of its two pillars – the temple and putting everything on the second one – Torah. The learning of Torah become a standard requirement for all Jews of land of Israel regardless of their wealth or lack thereof. There were multiple sects, which had various other ways of survival one of them being Christianity. However only one put everything on education and this one maintained Jewish specificity afterword. This tradition did not limit itself to Torah. It produced 6 volumes of Mishna completed about 200 AD. The new religious tradition made emphasis on reading Torah in Hebrew, rather then in regular language of environment, cementing Jewish specificity and continuation.

This is review of economic circumstances in land of Israel after temple destruction with emphasis on economic costs of continuing Jewish tradition of education with no return in sight for a long time. For farming community that Jews were at the time this continuing education was nothing more then costly ritual maintained only by a relatively small minority for whom intangible psychological benefits of education, discussion, and belonging were significant enough to stay within this weird tradition. Being an economist author provides mathematical analysis of these ideas.

This is a continuation of economic analysis of consequences of Jewish tradition to period from 200 to 650 when it still remained a costly religious duty with no visible benefits outside of psychological satisfaction. It accompanied by analysis of dynamics of Jewish population provided as support to the idea that since only minority of people could find strong enough psychological benefit of education for its own sake, it should be continuing decline in numbers of Jewish population due to conversions rather then extermination. A very interesting analysis is conducted based on material traces of Jewish population distribution such as synagogues buildings. This analysis points to much higher rate of decrease of rural population of Jews comparatively with city dwellers. It also points to legal limitations on Jewish attempts to stop mass conversions to Christianity.

CHAPTER 6: From Farmers to Merchants, 750-1150; The Economics of Hebrew Literacy in a World of Merchants; The Golden Age of Literate Jews in the Muslim Caliphates; Summary. Annex 6.4: Formal Model of Education and Conversion of Merchants

This chapter reviews period from 750 to 1150 when Jewish dedication to education unexpectedly started to produce great economic returns in form of white color jobs abundance of which was produced by development of great Muslim Caliphates in Mesopotamia. The point is made that it was not only education, but also legal notions and ideas, contract enforcement, and dispute resolution mechanisms developed within Jewish tradition that provided Jews with competitive advantages in areas of intellectual activities required by economies of bureaucratic states. This chapter also provides mathematical analysis of rate of conversion for different groups in relation to different methods of taxation with inference that proportion of merchants among Jews should grow by proportions consistent with actual historical data.

This chapter is about prosperous Jewish traders who used their literacy and numeracy to provide services necessary for international trade all around the known world especially in Muslim Caliphates of Middle East and Europe. Special attention allocated to European Jews. Even if Jews moved to Italy, France, and Germany back at the period of Roman Empire, the bulk of Jewish population of Europe came from different sources and much later. They were seems to be attracted by need of multiple small kingdoms in qualified services of merchants, money managers, and artisans that Jews specialized in. With continuously changing forces of pull and push they were moved throughout the Europe eventually creating multiple small, specialized communities just about elsewhere without mixing that much with local population. Genetic research of Ashkenazi Jews shows their close relationship with people living in Middle East and North Africa rather then with French or German population of Europe.

This chapter analyses the most pronounced Jewish specialty – moneylending. The point is made that it was not a business activity forced on Jews by religious restrictions on other population, but rather a choice that allowed most effective use of specifically Jewish skills developed via religious practice of education. Moreover data provided that Jewish participation in credit market was relatively small amounting to not more than 10-20% of market share. Also here are provided very specific data on types of loans, borrowers, and collateral used based on historical records in Italy.

This chapter is about Mongol conquest and destruction of sophisticate urban caliphates that eliminated need in type of professional services provided by Jews and following collapse of Jewish demographics in this area.

CHAPTER 10: 1492 to Today: Open Questions; Portrait of World Jewry circa 1492; Jewish History, 7o CE-1492: Epilogue; Trajectory of the Jewish People over the Past 500 Years; Persistence of Jewish Occupational Structure

The final chapter briefly restates the Jewish history traced in this book until 1492 and adds snapshot of changing demographics and locations of Jewish population of the world. It is specifically stresses continuity of Jewish vocational profile and prominence achieved by Jews in all intellectual areas. This prominence and its source in the contemporary world when intellectual profession became the most important and competition in traditional Jewish vocational areas is high are posed as questions for the next installment of this research related to periods from 1492 until now.

I find this book and its ideas very intriguing and having high explanatory value. If typical count of generations for humans is about 25 years, then period from destruction of temple to opening of opportunities in Muslim caliphates in 650 had about 25 generations: more than enough for genetic selection. At the same time contemporary world demonstrates that practical disappearance of religious tradition of Jewish learning combined with prosperity, and security of young Jews dramatically decreased their intellectual ability to analyze and appreciate facts and ideas, while leaving intact their seemingly inherited joy of participation in all things ideological, making them into fodder of all kinds of ideological movements from eastern religions to weird cults of environmental extremism, and even to far left anti-Semitism.