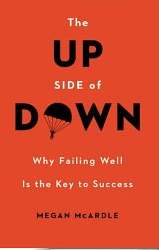 This is a simple book with simple and very American idea – the failure is not only an option, but inevitable event in everybody’s live and the only way to achieve anything is not to be afraid to act, sometimes succeeding, sometimes failing, but always learning.

1. FAILURE IS FUNDAMENTAL – How a Brain Scientist and a Psychologist Hedged Me Stop Procrastinating
It starts with experiment when a number of highly educated engineers failed to build a structure from spaghetti, while kindergarteners succeeded beautifully. The key was trial and error which kids used enthusiastically, while engineers wasted time trying to apply abstract thinking. The point is made that trial and error, or in other word failure and recovery, is a natural way to succeed. An additional point is made about external evaluation. Praise for success makes people protective of success, often by avoiding challenge. Praise for effort makes people to apply more effort. This brings in critic of high stakes testing and selection culture when failure could disable person for life. The alternative is a computer game learning structure: multiple low stakes trying with movement ahead after obtaining full command at the current level of the game.

2. THE VIRTUOUS SOCIETY – What Two Economists and an Anthropologist Can Teach Us about Free markets
This starts with Vernon Smith’s research and modeling of California energy market in 1990s. The lesson is that failure is valuable only if there is feedback. If it is disconnected like in case of user disconnected from the cost of used energy, the system fails. Moreover the success or failure of market depends on rules. Market based on rules and morality in New York works, but rule-less and amoral market in Moscow fails. The research shows that market creates rational results even from irrational behavior. Another series of experiments produced generic rule of rules: participants should communicate to discover workable rules. From anthropological research and chimps comes notion that human exceptionalism originates in ability to cooperate which enhanced by ability to communicate. The rest of the chapter dedicated to fairness of hunters versus fairness of farmers, that is fairness of returns on ones labor and fairness of sharing as insurance in unpredictable environment. As illustration the difference reviewed between American and European attitude to business failure. European attitude – failure is the end of career, American – keep trying.

3. THE EXPERIMENTERS – Why There Are No Guarantees in Hollywood or Silicon Valley
This chapter is pretty much about the simple fact that nobody really knows future and success and/or failure often is just unpredictable. As example it reviews 2 similar stories about movies: Titanic and Waterworld. One was highly successful and another flop. Then it goes through Tetlock’s research and failure of experts to predict. Other forms of attempts to predict such as pilots and small scale experimentation also reviewed using history of welfare reform, LA school lunch menu massive change, and new Coke debacle. The main point is made at the end based on Hollywood’s methodology of screening movies on the small scale and fixing what is fixable before rolling it out. In other words: real live experimentation with errors and corrections.

4. ACCIDENTS, MISTAKES, FAILURES AND DISASTERS – What the Hospital System Can Teach Us about the Mistakes We Make
This chapter is about critical mistakes related to emergency health problems. It is based on author’s personal experience and demonstrates how mistakes are made in the situation of life and death for patients, but routine business for doctors and nurses. It also discusses how small mistakes cascade one on the top of another leading to catastrophic consequences. The big point here is that people often focus on results forgetting about process and by doing so create opening for cascading sequence of small errors growing into the big problem. The focus on a process could limit possibility of such event.

5. CRISIS – What a Bad Breakup Can Tell Us about the GM Bailout
This chapter starts with musing about failure sometimes being “the best thing that ever happened”. From there it goes to continuing normalcy of type of mistakes that people do when dramatic changes in situation are not responded with dramatic changes in behavior. Example is provided of people behavior in World trade center after attack. Some business examples also reviewed such as GM and Solindra.

6. ADMITTING YOU HAVE A PROBLEM – What Gamblers Anonymous Could Have Taught Dan Rather
This chapter is about inability to see reality when individual has predefined approach. The Dan Ratner’s story of using false documentation on Bush’s desertion is a good example. It goes through typical causes of such blindness: concentrated attention to one point leads to missing another (gorilla in the basketball game), Bending the Map (one does not know where he is and does not know that he does not know), and Confirmation bias (I see only what confirms my opinion)

7. GETTING UNSTUCK – Adopting the Way of the Shark
This chapter is based on author’s personal experience of being unemployed, unloved, and frustrated. The method for recovery from all these unpleasant situations: keep moving. Keep looking for job, for love, for whatever else you need, but do not stop. Keep processes going and eventually you’ll get result. An interesting note on American exceptionalism: it is easier to fire people in America, which means lower risk of loses when hiring that results in higher level of opportunities.

8. BLAME – Blame-storming and the Moral of the Financial Crisis
This chapter is about blame allocation and human propensity to find agency everywhere whether it is there or not. It also uses a nice new term: Groupidity meaning doing stupid things because group does it. Interesting turn in regard to agency seeking is its link to control: If it is the agency who does it the agreement potentially could be achieved either through bribe, submission, threat, or whatever so it is controllable. If there is no agency, then no control is possible which is difficult to tolerate. From here author goes to search for scapegoat and death penalty debate.

10. FORGIVENESS – How I Learned to Stop Worrying and Embrace Easy Bankruptcy (Though Not Personally)
The chapter is dedicated to role of forgiveness as it represented in American bankruptcy code in second chance opportunity. This specifically American cultural trait – availability of 2nd or even 22nd chance provides for much lower level of fear of mistake and therefore for better learning opportunity that lead better final results.

I am pretty much agreed with majority of points that were made in this book. I would also like to stress something that is not necessarily obvious: there is really no other way to learn anything except for an old good trial and error method and there is no place in the world where errors have less negative impact on future opportunities then in America. This is the greatest advantage of this country comparatively with everybody else.