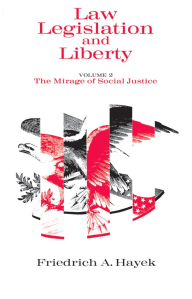 In volume two Hayek analyses somewhat contradictory relationship between human notions of justice and overall culture developed over millions of years when people lived in small bands of basically tribal society versus demands and notions of justice that makes market possible and efficient.

7. General Welfare and Particular purposes
This part is dedicated to analysis of abstract rules compliance which creates opportunity for functioning market. Probably the most important conclusion that somehow escapes many philosophers of “progress” is that future is unknown and therefore even notion of progress when somebody knows that some end is inevitable in the future is invalid. The best we can do is just complying with time tested abstract rules. I am not necessarily agreed with this idea of compliance. I absolutely agreed that future is unknown and that “progress” as in “progressives” is purely junk thinking. But I believe that present is known and if the present provides clear and obvious evidence that time tested abstract rules are not effective any more, then compliance maybe unreasonable and rules should be changed

8. The Quest for Justice
Here presented the idea that Justice is pretty much negative that is absence of injustice. The following very interesting discussion about Justice vs. Law vs. morals vs. nature vs. sovereignty is very interesting. I am fully in agreement with this notion of justice.

9. “Social” or Distributive Justice
This is detailed discussion of “Social justice” as equality of result assured by government intervention into all areas of human life. Hayek dedicated lots of space to this discussion and it is probably good decision because it became so popular in his time and still remains popular. I think that this notion of social/distributive justice is so logically absurd that the only reasonable explanation of its popularity is that it is a great tool for people not happy with current resources allocation to unite around common objective of violent resource redistribution to them. Leaving alone moral side of it, it is just simply counterproductive when resource transfer comes down to the robbery by government of individuals who produced these resources. The outcome proved beyond any reasonable doubt by all history of XX century is always the same – productive individuals stop producing and amount of resources greatly diminished in direct proportion to severity of robbery. For example in Russia and China robbery by communist governments was absolute and immediate consequence was starvation in places that did not know problems with food for centuries before communists implemented social justice. The robbery in Western Social democratic countries was relatively benign leaving productive individuals with some incentive to remain productive even if it was significantly diminished. As result they wind up with significantly diminished amounts of resources available as result of decrease in economic growth.

10. Market Order
Probably nobody is as good as Hayek in describing market order and logic of its superiority over any other system of organization of human activities. I think that the most important take out from this chapter would be this:
• “A Free society is a pluralistic society without a common hierarchy of ends
• “Specific commands / interference in market order create disorder and can never be just”
• “The good Society is one in which the chances of anyone selected at random are likely to be as great as possible”

11. Discipline of Abstract Rules and the Emotions of the Tribal Society
Here Hayek provides a detailed analysis of reasons for people moving back away from superior market order to organizational thinking of Tribal society and consequently to the royal screw-up of their lives. I am not completely agreed with his analysis, but I do not think that it is that relevant. The humanity always acts in the trial and errors mode and errors of “Social justice” / Progressivism, and Communism/Socialism present themselves in form of decreasing quality of life for vast majority of people. Eventually these junk ideas will go away with the wind. Too bad for many people it spoils the only life they have.