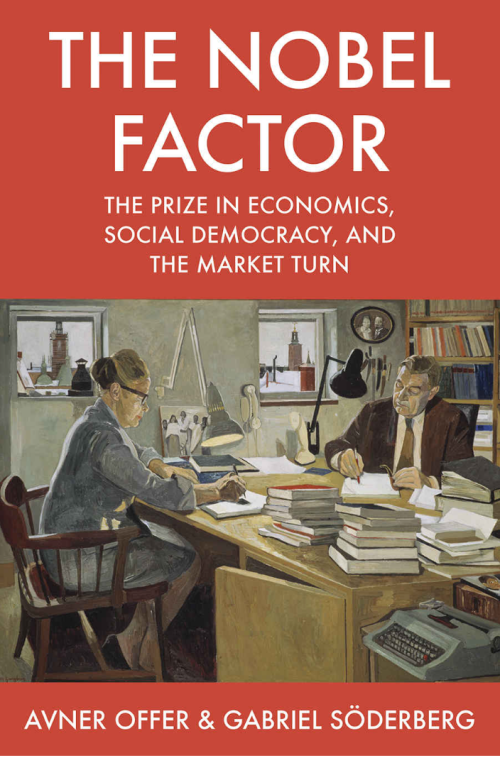 The sub-main idea of this book is that economics is not a real science and that majority of economists including those who received Nobel price understand this. However the main idea is that Prize in Economics is not really the Nobel price, but somewhat external creation of Swedish right wing economists who used it to provide more legitimacy to free market ideologues whom authors, being clearly of socialist persuasion, deeply resent. Correspondingly overriding objective of this book is to undermine this legitimacy and convince reader that Scandinavian socialist model of 1950s really worked just fine until reactionaries succeeded in undermining it and moving Sweden back to horrors of capitalism.

The introduction spells out authors believe about economy being something like not completely legitimate way to undermine what they call Social Democracy – the combination of market economy with government controlled massive redistribution of income and Keynesian interventions on the large scale. They provide a gist of the book as retelling of history of economic views with paradise (Social Democracy) achieved and then lost due to intrigue of evil free marketers.

This is about economic models that build similarly to technological models like airplanes with one important difference – they never work in real live. Authors look at Robert Lucas as contemporary model builder and then jump back to David Ricardo as most effective builder of oversimplified models. They also discuss idea of rational expectations and complete this chapter by countering what they call New Classical Macroeconomics (NCM) with Social Democracy. Interestingly enough, they link NCM with ideas of post-modernism and anti-realism, which are quintessentially anti-capitalist ideas.

This is mainly discussion of meaning of science as it relates to economics and value of prizes as symbols and ritual.

This is brief review of interwar economics in Europe with stress on monetary issues, specifically consequences of loosing gold standard. The special attention paid to development of Stockholm School of economics and its support of sound money and resulted clash with Social Democracy that obviously wants fiat money controlled by government. They also provide not very well known, but interesting story of interwar Bank of International Settlements.

This is mainly story of after war struggle between Banks and Swedish Social Democracy when socialists wanted to spend on social programs to buy votes and power and banks wanted maintain sound money and retain economic power. The Nobel price for economics in this story is a by-product of this struggle or as authors call it “A Cuckoo in Nobel Prize Nest”.

This is pretty much story of liberal (in American understanding) vs. conservative evenhandedness of awards that author seems to consider unfair despite much higher level of references for liberals. They provide a nice graph where “Arrows” means characteristics of citations” 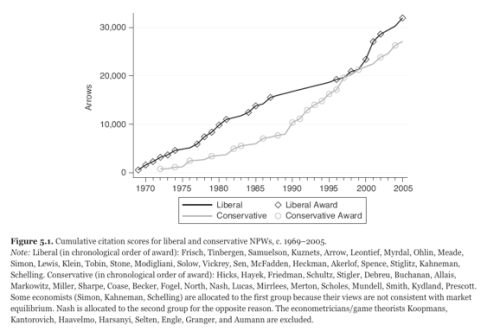 This is data heavy review of impact of the Nobel Price on popularity and citations of individual economists. Authors conclude that prize does have credibility, but it rather follow citation curve than leads it, albeit it does raises popularity of specific economists. Here is a graph to support this idea: 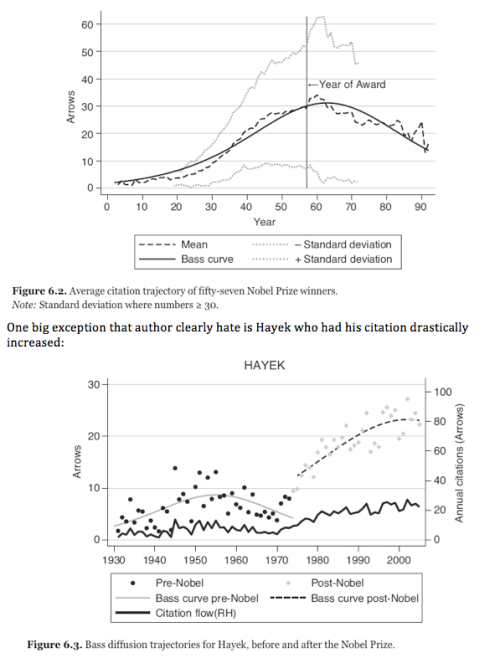 Here authors look at Nobelists based on their approach to economics either as Empiricists or Formalists and here is how they define them: 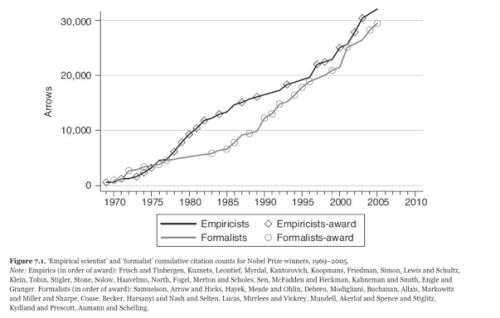 They also discussed contrasts in approach between what they call Social Democracy (good because it provides managed solution for resource allocation over live cycles via redistribution) and Market Alternatives (bad because it hold that world is too complex for simple management and just rely on market to allocate resources in the best way). They even provide ideal sequence of development right out of book for systems analysis: 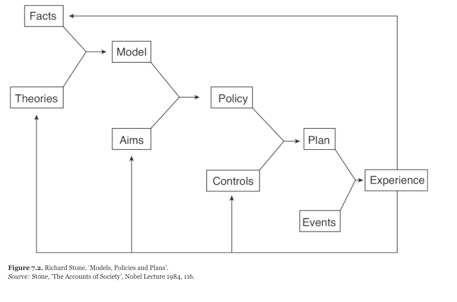 Here authors trying to describe Swedish Social democracy as nearly perfect solution for economic issues of society that was successfully implemented in Sweden from 1930s to 1970s, but then somehow was undermined by international competition and evil Swedish economists like Assar Lindbeck.

This chapter seems designed to convince people that Swedish economic sclerosis of 1980s that eventually led to significant market oriented reforms, actually did not occur, but was rather invented by market oriented economists. Their main point is that economic calculations designed in such way that they underestimate value of production for countries with high level of public services. In short this is an attempt to explain away economic failures of Swedish Socialism as imaginary.

Correspondingly this chapter is an attempt to explain away success of market by assigning it to unhealthy levels of easy credit that eventually caused financial crash.

The final chapter is restatement one of authors’ main points that Economics is not really science and should not be included in Nobel prizes. Finally they add another issue that economics is a-moral because it just trying to link inputs and outputs, while humans are moral and consequently economic priorities and methods should not be really applicable for society management.

This is an interesting review of Nobel prizes in economics with multiple diatribes against market and glorification of social democracy of Swedish type. It is typical product of people who somehow fail to understand complexity and diversity of humanity and consequently believe that the best way of society organization is kind of elitist oligarchy masked as democracy when the best and brightest, mostly defined by academic achievements, control resources and decide what when and how to produce and consume them, while mentally deficient masses blissfully participate in elections mistakenly believing that they actually decide direction of the society. Unfortunately authors heavily concentrate on small homogeneous Sweden society as example of successfully working Social democracy and completely ignore other much larger scaled socialist experiments of Russia, Chine, and Nazi Germany – all of them being economic and humanitarian disasters. Somehow they also missed a simple historical fact that very well explains Swedish prosperity of 1950-70s – destruction of WWII that for Sweden was a huge bonanza of German military orders paid by wealth transferred from all over occupied Europe. From this point of view the temporary success of Swedish Social Democracy was purely parasitic and disappeared when both Europe and Asia recovered after the war. It short authors’ ideas of superiority of Social democracy just do not hold water.