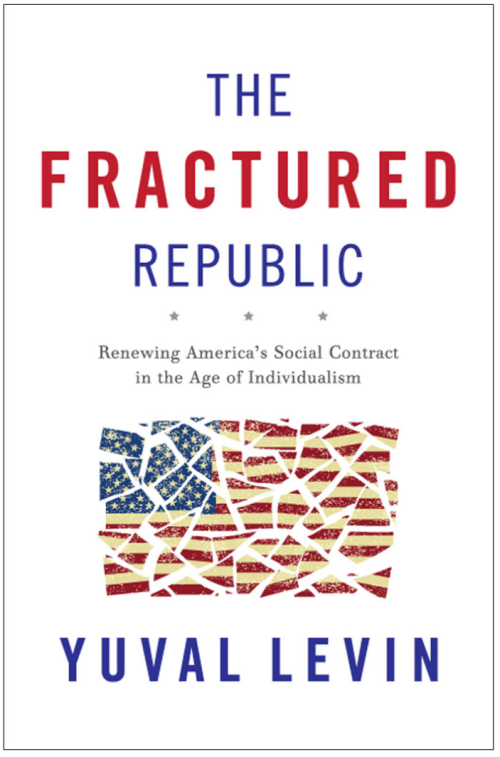 This book is designed to analyze current fracture of American republic and propose solution. The fracture is coming from strive to return to the ideal past that never really existed: progressive paradise of FDR or conservative paradise of Reagan. The solution author see is to lower the stakes for both sides and move to more decentralized solutions without dismounting institutions of big government, but rather bringing them in line with more decentralized society that we live in due to internet, easy communication, and other features of contemporary world.

PART I: OUT OF ONE, Many

This chapter is about nostalgia of both parties: Democrats for 1960s with its “wise” government, powerful unions, and liberal Supreme Court overriding constitution at will, while Republicans long for 1980s with Reagan’s “Morning in America” and victory over communism in Cold War. Both sides have selective memories picking up what they like and forgetting what they do not. Author rejects this nostalgia on both sides.

2: The Age of Conformity.

The age of conformity that both liberals and conservatives are nostalgic about is time for about 25-30 years after WWII when the whole industrial world but USA was in ruins leading to nearly complete lack of competition and huge needs in American products elsewhere in the world. This created conditions when it was enough for everybody: high paid union jobs, high profit for government supported monopolies, moral cohesion of society based on trust in government ideologically supported by XX century collectivistic craziness. Obviously it was unsustainable because other countries eventually restored their industry so competition put end to this paradise.

3: The Age of Frenzy

Then come age of what author describes as frenzy from late 1960s until early 2000: failures of Vietnam war, civil rights movement, oil embargo, seemingly successful progress of communism in USSR and around the world, and, the most important, increasing competition of low wage countries. Consequently cohesiveness of society failed. A century of communist / socialist propaganda and continuing advance of individuals carrying these ideas into ideological institutions of society: education, entertainment, legal system, and journalism brought its fruits. On one side it was liberalization of thought and behavior resulted in retreat and weakening of traditional values, while the new collectivistic values were not strong enough to assert their power on everybody via government coercion. While the move of the country to the left was temporarily interrupted by Reagan counterattack and following hiatus when even democratic president of leftist persuasion declared that era of big government is over, this movement restarted with the new century when undeclared alliance of left and right elite was reestablished.

4: The Age of Anxiety

However after relatively short period it began unraveling when leftists recognized what they believe is opportunity to establish complete control over the country: mass immigration from the poor countries of individuals brought up with strong collectivistic ideology and mass movement of population from active mainly independent market based productive activities to mainly parasitic existence either on welfare or within some governmental or quasi governmental bureaucratic structure. The partial dissolution of elite alliance moved country to the higher level of polarization. Here is a couple of graphs demonstrating this:

PART II THE NEXT AMERICA

This chapter is about contemporary status of America economy. The main point here is that what used to be V shaped demand for labor when low and high skill level jobs were plentiful, while middle level was substituted by automatization is not a case any more. Now much more functional computerization and automation moves to substitute human labor at all levels of complexity. Obviously it makes everything cheaper and better for consumers, but practically eliminates labor. In view of this continuing struggle between public and private sectors for share of economy becomes bitterer every day. Author seems to propose non-trivial for rightist solution: to diminish fight over public versus private and move to promoting decentralization even if it is in public form. He also proposes to empower mediating institution as means to balance market, which produced lots of losers, without undermining prosperity and freedom, which are always deteriorate when public option under government control expanding in some area of society.

This chapter is about cultural division constantly increasing in America due not only to ideological struggles, but also to technological changes when instead of 60% of population watching the same show on TV in 1950s because there were no alternative, we now have hundreds of shows going on so even the most popular attract a small fraction of population. Author looks at multiple areas of culture to analyze trend and support his thesis that culturally America become hugely diverse, while political life lags behind and remains way too centralized.

7: One Nation, After All

The final chapter is designed to provide concise diagnosis of current American problems, some recommendations for solutions, and prognosis of future outcome. The problem as author sees it is weakening of intermediate political structures and unreasonably strong empowering of two opposites: government and individuals to do things that they are not competent to do. The result is society that is not working for its members and political polarization that prevents implementation of corrections. Author sees remedy in doing away from extreme centralization and extreme individualism and moving to localization and diversification of power that would allow to move to more competent governance and functional society much better adapted to contemporary technological, ideological, and political realities. Oh, and by the way he believes that conservative political movement will find way to move country in this direction.

I find this description of recent American political history and contemporary situation quite interesting, even if I agree neither with this logic nor with this recommendation. I think that obvious nostalgia often expressed by both left and right if mostly rhetorical tool to demonstrate where they want society to go. The real issue is that methods of creation and allocation of resources that both left and right promote are not adequate for contemporary technological levels achieved by humanity, while political structures cannot satisfy psychological and ideological needs of individual members of society in which traditional objectives of any human group such as physical survival are taken for granted and practically pushed into background by much more complex requirements for self satisfaction and psychological happiness.

The reason leftist ideas of big centralized, benevolent, and all powerful government cannot satisfy people is due to two problems: one is that government consist of humans who are always act in their own interest and the second one – complexity and dynamics of needs of millions of people and activities that required to satisfy them are so complex that no conceivable centralized hierarchical system could handle them. Only market system proved positive ability to do it at least much better than any other system.

The reason why conservative ideas of unlimited free market with somehow benign regulations would work just fine to meet human needs fails in reality is that they ignore recent technological development that increasingly makes humans uncompetitive as providers of productive labor. Since all market exchange is based on interactions between property owners and labor sellers, only one side remain valid –property owners, while labor sellers are made redundant by machines, the free market could not provide any resources for this people. There is no reasonable solution for this problem presented by conservatives so far, just unfounded believes that human labor will always be in demand.

Paradoxically leftists have solution, even if they do not recognize it: bureaucratization of labor sellers capable to obtain educational level necessary to take place in hierarchy and welfarization of those who cannot. However I believe it is pseudo solution, which is not going to work because humans could not be happy either being a small cog in bureaucratic machine or idle recipient of minimal resource allocation.