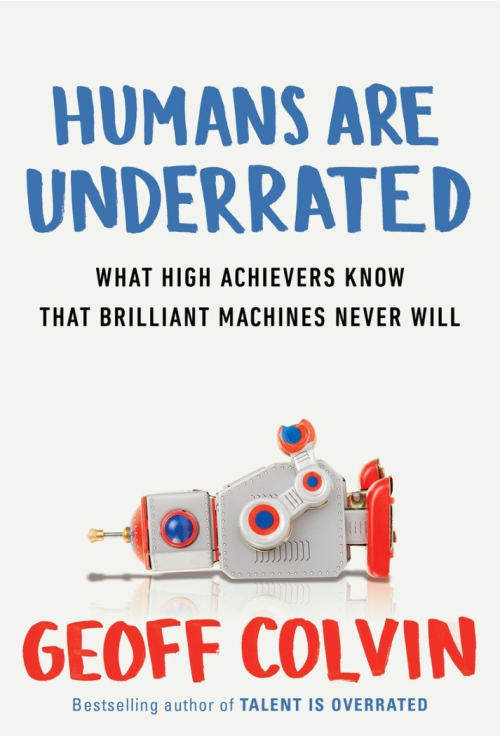 The main idea is that computers and software are becoming so powerful and effective in all areas of live that they are more and more capable to substitute human labor not only for the middle level clerical jobs, something they do for a half of century, but also in all kinds of intellectual and manual activities that they were not that capable to do so far. However it does not mean that humans are obsolete, but rather that humans will have to apply themselves to radically different activities such as interacting with each other, defining objectives and general ways to achieve them, and overall to doing purely human things.

CHAPTER ONE: COMPUTERS ARE IMPROVING FASTER THAN YOU ARE

As Technology Becomes More Awesomely Able, What Will Be the High-Value Human Skills of Tomorrow?

This is a brief review of dramatic improvement of computer functionality over last 50 years. Whether it is Chess or Jeopardy computers are now champions, not humans. So author raises a question: What can people do better than computers?

This is review of all areas where computers become better than people. It used to be that computers could not do low level manual jobs because it requires dexterity and flexibility, as well as high level intellectual work because it requires complex reasoning. However lately the higher level of functionality opened door for computers in these areas. From driverless cars to computerized legal research and robotic surgery humans are pushed out by better performing computerized equipment.

CHAPTER THREE: THE SURPRISING VALUE IN OUR DEEPEST NATURE

Here author makes case that our human brains are optimized by evolution for survival in groups, therefore social relations, cooperation, and human-to-human interactions could not be possibly automated. So the way of future author sees in switching from being knowledge workers to being relationship workers. Correspondingly the meaning of great performance changing from being able to produce material or intellectual goods and services to being able to build successful relationships.

CHAPTER FOUR: WHY THE SKILLS WE NEED ARE WITHERING

Technology Is Changing More Than Just Work. It’s Also Changing Us, Mostly in the Wrong Ways.

This chapter is review of current situation when our social skills are generally in decline, often relegated to social media that substituted personal relationship. Author believes that this process should be not just stopped, but reversed and we should concentrate on development of social skills. In the following chapters he looks in detail at specific skills that should be promoted to be successful in the new world.

Empathy Is the Key to Humans’ Most Crucial Abilities. It’s Even More Powerful Than We Realize.

This is about the most important skill that humans possess, but robots in author’s opinion cold not: empathy. An interesting part of it is idea that we emphasize to survive because humans survive in a group and could not make it without the group. Also important idea here is that empathy is a skill not a trait so in could be learned as any other skill.

How the U.S. Military Learned to Build Human Skills that Trump Technology, and What It Means for All of Us.

It Isn’t What Team Members (Or Leaders) Usually Think. Instead, It’s deeply Human Processes That Most Teams Ignore.

This chapter is about another exclusively human trait: team play. It looks at such things as team IQ that considered higher than IQ of any individual within the team. It is also about need for direct person-to-person communications because on-line communications are not capable to transmit full scale of communications between humans.

Why the Right Kind of Narrative, Told by a Person, Is Mightier Than Logic.

The next exclusively human skill is ability to create stories and communicated complex ideas via story telling. One of the most interesting things here is idea of “Neural Coupling” via some narrative.

CHAPTER NINE: THE HUMAN ESSENCE OF INNOVATION AND CREATIVITY

Computers Can Create, but People Skillfully Interacting Solve the Most Important Human Problems.

This chapter somewhat rejects usual believe that computers could not create the new intellectual products. On the contrary computers now create new poems, music, and much more with pretty good quality so that even experts have hard time to find difference if compared with human creations. However author believes that the higher level of creativity comes not from individual efforts that computers are quite capable to emulate, but from interaction between people that computers could not do by definition. Moreover the decisions what problems to solve or what objective to achieve will always remain human prerogative and would always require extensive interaction between people.

CHAPTER TEN: IS IT A WOMAN’S WORLD?

In the Most Valuable Skills of the Coming Economy Women Hold Strong Advantages over Men.

This chapter is about gender differences. After analyzing gender specifics author comes to conclusion that female dominance in interaction and overall communication skills leads to significant advantages in contemporary world. He seems to believe that it is possible to provide male with extensive training in empathy and communications could at least somewhat level playing field

Some Will Love a World That Values Deep Human Interaction. Others Won’t. But Everyone Will Need to Get Better–And Can.

The final chapter is somewhat optimistic, claiming that despite increase in computer power and functionality there always be exclusively human activities and that it is possible to train people to be so good in communications and interactions as to create enough value for a good productive live.

I generally agree with the thesis of this book that there is no area of physical or intellectual activity that computers could not do as well or better than humans. However I do not think that it would be just a change in type of activity with preponderance of human interaction over anything else. I would rather expect the very nature of activity change from the vast majority working to achieve somebody else objectives in exchange for pay and/or resources to much more self-directed activities to achieve own individual objective. In this case every individual would be able for example to setup scientific research objectives at the scale now available only to the top-level individuals in big organizations when instead of thousands of individuals working towards this objective it would be a few powerful computers doing the same.