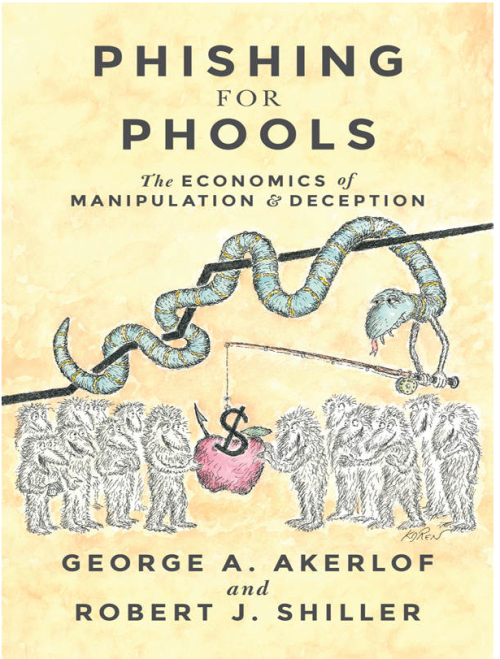 The main idea of this book is that traditional economics that extensively using notion of supply and demand equilibrium is not sufficient for describing real live market economy because it is missing such phenomenon as cheating, misrepresentations, and multiple forms of using psychology in order to transfer resources from consumers to businesses without fair exchange for goods and services. Unsurprisingly authors see the best remedy in government intervention and strict control over market by experts like themselves who are too smart to be deceived of capitalists’ phishing practices, always have noble intentions to protect consumers, never use self-interest in their regulatory decisions, and, most important, always know what consumers need better than consumers themselves.

The introduction does introduces the notion of Phishing Equilibrium that in authors opinion overrides market equilibrium in contemporary environment. They provide two examples: Cinnabon stands and Health clubs. The first one sells tasty, but unhealthy food and the second sell long-term subscriptions knowing that people’s exercise regime decisions usually fail overtime so they pay for intention to use health clubs in the future rather than for actual use. Authors also introduce notion of the Monkey-on-the-Shoulder meaning staff that people want, but in authors’ opinion do not need. They believe that on sober evaluation most people would not follow the Monkey’s lead, but advertisement, overall culture, and, very important, general stupidity of people, makes them to become Phools, easily deceived by evil marketers.

Part one designed to demonstrate that Phishing Equilibrium plays significant role in our lives.

CHAPTER ONE: Temptation Strews Our Path

This chapter uses Suze Orman and her televised advise to discuss need to adjust one’s consumerism to the level of income and avoid being seduces by marketers to overspent.

This one discusses reputation mining when seller builds reputation by doing well by customer, but then sells rotten product using this previously built reputation. Somehow author link it to banks and rating agencies that had incentive to give good rating to low quality securities such as subprime mortgages.

PART TWO Phishing in Many Contexts

This is about advertisers using knowledge of human psychology and storytelling to sell their products. It provides nice, albeit brief and hostile, history of advertisement in America ending with discussion of advertisement’s penetration of political process.

For the following few chapters their headers say it all. They provide some specific examples of phishing in every area.

These two chapters represent a very impressive trick. Authors discuss banking and investment industry with special attention to its failure: S&L scandal, Junk bonds and Michael Milken, and do it without really mentioning government role in all this shenanigans. They seems to be oblivious to the fact that all phishing was possible only because of government intervention and that bureaucrats and politicians always setup rules as benefit people who do it, that is themselves.

CHAPTER ELEVEN: The Resistance and Its Heroes

This chapter is about people who authors consider heroes of fight against phishing; they are mainly politicians, bureaucrats, and their supporters. They also mention business groups who setup standards for honesty, but they seem to be oblivious that such group, especially when government supports them, usually serve interests of their members rather than customers and often used just to suppress competition.

CONCLUSION: EXAMPLES AND GENERAL LESONS: New Story in America and Its Consequences

Here they iterate their believe that people are “phishible” because they tell themselves and listen to stories consequently making bad decisions they would never made outside the framework of the story. Consequently authors seem to believe that people too vulnerable to these stories to be trusted make decisions for themselves. On other hand authors themselves have a story they want to promote and this is story of progressive quasi-socialist movement that started in late XIX and obtained dominance in 1930. This story is about big benevolent government that protects people from all kind of phishing, but most of all from themselves. Authors lament historical failure of this movement to deliver on its promises and appearance and strengthening of the new story, which is about big bad government that sucks out resources and energy from people leaving them much worst off than before. They narrate 3 stories that they believe support the thesis that benevolent government story is true, but big bad government story is false: Social security, Securities regulation, and Citizens United.

AFTERWORD The Significance of Phishing Equilibrium

In afterword author restate an obvious fact that there is basically nothing new in their doctrine of phishing equilibrium. Somewhat surprisingly they admit that contemporary relatively free-market economy is huge blessing for every living person and everything bad they described in their detailed analysis of phishing is just marginal deterioration of our economic live, albeit still consequential for our wellbeing.

This is a somewhat curious, but not significant narrative of economists who are too good economists to call for socialism, but intellectually too deeply emerged into leftists way of thinking. It causes some funny contradiction when authors consistently blame market forces for failures of highly regulated parts of economy where market forces especially restricted by bureaucracy like finance and securities. There is however a legitimate concern about phishing, which has nothing to do with regulation. This concern is inadequate ability to evaluate reputation in wide and anonymous market when people conduct one time transaction with no real ability to know previous transaction’s outcomes. In my opinion there is an important role of organized violent hierarchical organization (government), but it is not regulation, but rather data collection and presentation about history of transaction participants as individuals. The need for coercion comes from the simple fact that people tend to hide inconvenient truthful information so without coercion it would be impossible to get. In short my opposition to authors could be expressed in simple terms: they believe and support controlling and regulating role for government in economics, while I believe in limited and strictly advisory role.