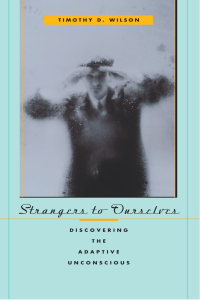 The main idea is that human personality includes two pieces: conscious self and adaptive unconscious, which are somewhat loosely linked. Of these two the unconscious includes a multitude of processes managing not only low level controlling functions, but also emotions, attitudes, and is responsible for a significant share of decision making. The conscious self is mainly limited to formal long term planning and justification of whatever person did as result of complex unconscious processes. The clear understanding of this could help individuals not only understand how their brain works and what kind of personality they really have, but also modify this personality into direction they want using roundabout processes like “ to do in order to be”.

This book is about self-knowledge or, more precisely about our current understanding of interplay between conscious and unconscious in human decision-making, actions, and behavior. It goes way beyond Freud’s ideas, retaining practically only his notion of unconscious being much more significant part of personality than it was perceived before.

Here author discusses unconscious in contrast to Freud as adaptive unconscious that is a number of autonomous and semi-autonomous systems in the brain and nervous system that manage a multitude of parallel processes in such way as to assure an adequate response of the human individuals to inputs representing continually changing environment. Here is a brief catalog of such processes:

The implication of all this is that it is not possible to achieve self-insight without taking into account all these unconscious processes going on in our minds. Author believes that it could not be achieved by introspection, but could be obtained by carefully analyzing our own behavior and how others react to us.

This is a more detailed look at adaptive unconscious that author defines as evolutionary adaptation. Adaptive unconscious here is viewed as background processor of 11Mbit/sec perceived by our senses and supporting the following functions:

4 Knowing Who We Are

This is unconventional look at psychological traits research, stating that personality contains two relatively independent parts: conscious construal of self and adaptive unconscious that are not necessarily in synch. This is demonstrated by low correlation between personality traits indirectly defined via questionnaires and observed behavior of individuals and opinion by others. These two parts control different types of actions: adaptive unconscious controls spontaneous responses, while conscious self normally controls complex planned responses. Author provides some guidance for external assessment of behavior:

This chapter is about causes of our actions, which in reality are often hidden in some areas of the brain inaccessible to our consciousness. In such cases consciousness often used to generate a plausible story for reasons of our actions, which is typically has nothing to do with real reasons. A good example is experiment that is involving people with divided brain, when information causing action is presented to one part of brain, while remaining is unknown to another, which quickly invents causal story. Experiments show that causal explanation of own action is often not better, than explanation of action of strangers.

6 Knowing How We Feel

Similarly to actions emotions and feelings are often product of adaptive consciousness generated without knowledge of conscious self. Author believes that in this area psychoanalysis could be useful, helping people to understand their own feeling. Author discusses two main uses for this: unconscious early warning system and love / hate attitudes. He present description of experiments demonstrating that it is quite possible for people to believe that they have one feeling, when they actually have another one.

7 Knowing How We Will Feel

This chapter continues discussion of emotions only this time not current, but anticipation of the future. People typically either over or under estimate their future condition as consequence of some event. Neither winners of lotteries nor victims of disable event experience long-term happiness or suffering they expect. The effects are typically wearing out over relatively short time returning people to their typical emotional condition before event demonstrating high levels of resilience.

This is about attempts to discover one’s own personality and unconsciousness through introspection. It goes back to Freud and his idea of archeological digging in individual’s history and memory to discover suppressed memories and emotions. It is illustrated by example from real estate experience when a good professional would never except buyers description of what he wants, but would lead buyer through process of discovery by showing different houses and carefully registering unconscious reaction until the unconscious set of requirements identified and appropriate would be sold. Similarly author is highly skeptical about requirement lists and sees psychoanalysis as discovery process to identify emotional needs and causes of problems.

9 Looking Outward to Know Ourselves

This is about using various objective methods such as time of reaction to subliminal messages to identify individual’s unconscious attitudes. For example it become popular to test racial attitude by pairing views of white and black faces with good and bad words. For example pair black and robbery and white and neighbor considered as fit together causing quick reaction, while white and robbery causes slow reaction. Also important for self-understanding is careful analysis of reaction of other people to us. Typically our own evaluation would be either over or under mark.

10 Observing and Changing Our Behavior

The final chapter is about observing our own behavior as the most important source of self-knowledge. A good quote for this from E.M. Foster: “How can I tell what I think until I see what I say?” In addition author looks at process of self-fabrication when person actually becoming what he/she is doing as in “do good, be good”. On other side of self-fabrication is fundamental attribution error when people attribute their actions to external circumstances. All this creates an opportunity to mold ourselves into whatever our conscious self wants us to be by doing, consequently training out adaptive unconsciousness to be what we want it to be. As example the author’s ability to overcome introversion by consciously forcing himself communicate with other people led to increased easiness of doing it and change of personality to be higher on extraversion than before his conscious effort.