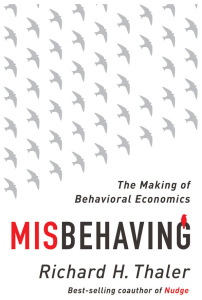 The main idea of this book is that contemporary economics, especially mathematical economics based on unrealistic assumption that human beings are nearly perfect calculating entities (ECONs) that are nearly always capable to identify the best way to maximize monetary returns and consistently act to achieve it. The reality is humans are poor calculators and more often than not act or fail to act in contradictory ways quite often contrary to their best monetary interest. The real economy of humans consequently works quite differently from theoretical economy of ECONs, so makers of public policy should take it into account and act correspondingly to achieve best results.

In this chapter author describes how he discovered that real people behave unreasonably if compared to ECONs and that Supposedly Irrelevant Factors have huge effect on peoples’ attitudes. He provides examples such as: Students perceive results completely differently if results presented as 80 out of 137 that 60 out of 100. Mathematically it is the same, but psychologically 80 points are good and 60 points are bad because people unconsciously retain benchmark of 100 in both cases. After example author presents his view of humans and then asserts that SI Factors in reality are very important to understand human behavior.

Here author moves to specific types of human behavior inconsistent with expected behavior of ECONs, such as endowment effect when people value the same thing much higher when they own it than when they do not.

Here author describes his initial discovery of work by Kahneman and Tversky about shortcut heuristics people use in their economic decisions and predictable errors they make in the process.

This chapter is about author experience at Stanford and initial interactions with the first behavioral economists Kahneman and Tversky.

This is about his experience at Cornell, author’s acceptance of behavioral economics and debates with traditional economists about key notions such as: Incentives, Learning, and especially Markets’ ability to correct human behavior by rewarding ECONs and punishing non-ECONs. Author is reasoning that it is not true and provides example such as GM that is consistently run poorly, but is still around overcoming market forces that supposed to do it away.

This is about mental accounting that occurs in the mind of humans and it is somewhat different than regular accounting that would be practices by ECONs. As example author uses coupons purchase of the same product from two different sources at different prices only because one of the sellers is upscale even when purchase occurs remote and there are no additional advantages provided by upscale seller.

This time author looks at mental accounts that are important for human, but somewhat irrelevant for ECONs who understand that money is fungible.

This is similar difference when for humans history is important, for example poker players behave differently depending on whether they are winning or not, while for ECONs it is clear that every round of game is independent and history should be not relevant for decisions.

Another difference is human difficulty with will power that sometime forces them to act preliminary to restrict their own freedom of action in the future. There is practically infinite will power in possession of ECONs so if human children have really difficult problem in marshmallow test, ECON children would presumably have no problem at all waiting for reward, providing net present value of 2 marshmallow in 20 minutes is higher then NPV of one marshmallow right now.

This a little bit more detailed view at the use of planning to compensate for will power deficiencies. When human plays two roles: planner and doer, the planner creates limitations for future actions in order to force doer act more like ECON and avoid action under spur of the moment.

This chapter is illustration of behavioral economics ideas based on author experience with consulting for Greek Peak resort and for GM. In the first case intervention was successful in saving the company by changing ticketing option based on patterns of human behavior, while the second, dealing with seasonal auto sales was not tried due to complexities of decision making by GM’s bureaucracy, despite sincere interest of some senior bureaucrats.

This is about another drastic difference between humans and ECONs. It presents results of research showing that for humans fairness is very important and they would even accept loses to punish unfair counterparts. Obviously for ECONs the very notion of fairness is meaningless.

This is description of games used to test attitudes to fairness in various experiments.

This is about an interesting point discovered and later confirmed in multiple experiments that when people deal with meaningless tokens they behave more as ECONs, however the same experiments with something meaningful, for example when mugs with university logo used instead of tokens, they behave more like humans demonstrating endowment effect.

This part is mainly about professional struggle that evolved between classical economists especially Chicago school and behavior economists around newly discovered anomalies in economic behavior. It also includes discussion of specific anomalies, and personalities from all sides involved in this struggle.

This part is about application of behavior economics analysis in financial area, the area where ECON attitude should be dominant.

This chapter includes discussion of efficient market theory, its impact, and consistent failure of this theory to explain human action in financial markets. It also includes an interesting discussion about multiple layers of thinking involved predicting other people’s actions such as If my opponent do A, I’ll do B, but if he is smart he would expect B and therefore he will do C not A, so I should prepare to do D instead of B and so on in infinite iterations.

This is about predictability of stock market, or more precisely about its impossibility. Specifically it looks at overreaction to events.

Correspondingly this is about reaction to overreaction, which can clearly cause serious problems – example provided: failure of CAPM.

This is an interesting analysis of stock market over/under pricing as related to real price presented by present value of dividends:

This is a discussion about human illogical behavior in close-end fund trading when market price little related to fund’s asset value.

This is another wonderful demonstration of human lack of logic based on stock prices of 3M and it’s subsidiary Palm when stock price of subsidiary (Palm) was much higher than price of 3M that actually included subsidiary.

It is about author experience in Chicago and another set of real live examples of human behavior with drastic differentiation from ECON’s expected behavior.

This is description of somewhat triumphal movement of behavioral economics into public conscious with publication of its findings getting wide popularity, important authors getting Nobel prices, and governments of Western countries happily jumping on its bandwagon in hope finally to get tool to nudge unwashed masses into behavior patterns deemed appropriate for them by elite bureaucrats and politicians.

Conclusion: What Is Next?

Author is very optimistic about future of economic of science overall and about inclusion of behavior economics into mainstream. He believes that future would bring dramatic improvement in economic data collection, economic education, and improved decision-making by everybody from individuals to governments.

I pretty much share author’s conviction that human beings are behaving quite differently from assumed ECONs who maximize monetary return in any situation. What I disagree with is the very notion that there is some correct mode of behavior that humans should be trained to understand and, if necessary should, be nudged or even forced to apply in their lives by some external entity either corporate or government bureaucracy. I believe that there is infinite variety of human objectives, goals, and wishes so there is no external entity that would have legitimate right to interfere with individual’s actions in strive to achieve these objectives as long as these action involve no violence, coercion, and deception. People should be educated to understand how economy works at both levels: individual where behavioral economics is supreme and ECON economics where simple accounting considerations play paramount role in business decision-making. I would fully support such education, especially if it goes beyond formal and becomes continuing support so individuals are provided with real time computer-generated analysis of their intended decisions based on ECONs approach to the world. However I absolutely reject idea of government using behavioral economics to nudge individuals into something they would not want to go.