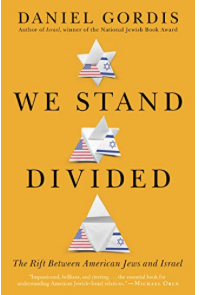 The main idea of this book is that the rift and even confrontation between American Jewish establishment and majority of American Jews on one hand and Israeli Jews on another is not an anomaly, but rather is the norm of this relationship, as it was existed since the beginning of Zionist movement. The reason is simple: American Jews live in America- universal country encompassing ideas of Western Enlightenment that applicable to the whole of humanity, while Israeli Jews live in National country of Jews encompassing Jewish strive to survive in hostile world by separating themselves into entity capable for military protection and economic support. This explains hostility of many American Jews to Israel caused by the fear that even slightest affiliation could threaten their good life among generally friendly non-Jewish majority. It also explains unhappiness of Israelis who feel that they do not receive enough support and understanding in their struggle to survive.

Introduction: “Why Can’t We All Just Get Along?”

Author starts here with reference to a number of writings and speeches demonstrating the deep division and tension between two communities. Author then discusses history of this divide and presents this book as an attempt to explain its character, inevitability, and permanence.

1: A Mistaken Conventional Wisdom – A Rift Older Than the State Itself

This starts with author recollection of reaction of American Jews to Entebbe raid saving hostages and war of 1973 when the very existence of Israel was questioned. He recollects the feeling of unity and unquestioned support American Jews had for Israel and then recounts how this feeling all but disappeared and was substituted with complex mix of love – hate – contempt that is expressed in multitude of ways. He retells the recent history and change from admiration of Israel fight to survive when it was weak to rejection of the same fight when it became stronger. Author makes a point that it is not something new, but rather old situation with very deep roots:

2: A Rift Older Than the State Itself

Here author looks at the rift between two Jewish communities, then rejects notion that it is a recent phenomenon and demonstrates that it is not correct by retelling the story of unhappiness of prominent American Jews with Israelis kidnapping of Eichmann. Then author refers to the refusal of American Jewish leaders support creation of Israel and rejection of Zionism. Here is a very nice confirmation: “ In 1885, American Reform rabbis adopted what is now known as the Pittsburgh Platform, the movement’s statement of core beliefs and commitments. In it, these rabbis declared, in part, that the Jews were no longer a people but now constituted a religion. “We recognize, in the modern era of universal culture of heart and intellect, the approaching of the realization of Israel’s great Messianic hope for the establishment of the kingdom of truth, justice, and peace among all men,” they said as they jettisoned Judaism’s long-standing particularism and embraced the universalism then much in vogue in philosophic and cultural circles. “We consider ourselves no longer a nation, but a religious community,” they said, and since Jews were no longer a national community, they expected “neither a return to Palestine, nor a sacrificial worship under the sons of Aaron, nor the restoration of any of the laws concerning the Jewish state.”
Author also discusses here external attitudes in America that at the time demanded 100% Americanism from new immigrants, which was completely consistent with wishes of Jewish immigrants, who feared rejection at the slightest hint of dual loyalty. Another fine point author makes is that eventual support of creation of Israel by American Jewish establishment in 1947 was prompted not by their support of Zionism, but rather they unwillingness to support admission of Holocaust survivors to America, which could strain relations with American Christian majority. Finally he traces how American Jewish attitudes to Israel mutated from supporting underdog fighting for National liberation, to protesting “Colonial power” that somehow suppresses National liberation of Palestinians.

3: A Particularist Project in a Universalist World

Here author compares American Declaration of Independence with its Universalist character, which claims commonality for the whole of humanity with Israeli declaration of Independence, which claims Jewish Particularity. Here is how author defines the core cause of difference: “America’s applicability to “all men at all times” and Israel’s commitment to the flourishing of the Jewish people are starkly opposite foundations for two different countries. That is why for many American Jews, to whom America’s universalism seems both natural and the indisputable ideal for the basis of a country, there is something deeply problematic and discomfiting about the very purpose of the State of Israel.“
Then author reviews history of discussions regarding this issue over the last century.

This chapter is not that much about conflict between two groups of Jews as about conflict between Zionist ideals and reality. Author starts it with his own history as a member of well to do Jewish family in America when his rabbi grandfather officiated Bar Mitzvahs and weddings in mid 1940s, while millions of Jews in Europe were being killed. He then discusses difficulties of understanding between people discussing ideals in comfortable settings and people fighting to death for survival – the process when people had simple choice: to die or to kill.  American Jews are always ready to mourn those who die and condemn those who kill, while Israelis who are still alive do not inclined to be remorseful for such transgression. Author also discusses how the growing military strength of Israel opened opportunity for similar to American approach to the issue among Israeli “revisionists historians”.

5: People or Religion: Who and What Are the Jews?

This chapter is about another part of conflict – the notion of Jewishness. The American Jewish tradition is about religion, being American with somewhat different religious view, just a bit more different than between Protestants and Catholics. For Israeli religion is not the most important part of Jewishness – the nationality is. From here comes another difference: for Americans variances of religious attitudes are normal. One could be Orthodox, Reform, Conservative, or whatever other denomination outside of the state control. For Israeli Judaism is state religion, so everybody should comply, at least formally, and pay taxes to support it.

6: How Naked a Public Square: A Liberal or Ethnic Democracy?

This chapter is about continuing struggle to reconcile democratic ideals generally accepted by both group with reality when American Jews are very comfortable being one ethnic group among others in multiethnic American Nation, while Israelis struggling to maintain ethnic character of their state in fear that loosing it would leave Jews ones again to be people without a country at the mercy of some hostile majority.

7: Charting a Shared Future—and Why That Matters

Here author discusses the future of not only relation between these two groups, but also of their existence. American Jews numbers and their influence in America are on decline and with mass assimilation and intermarriage quite possibly on the way to extinction. Israel on other hand acquired millions of Jews from former Soviet Union and other socialist countries, increased birthrates of Jewish population and strengthened its ethnic/religious character as Jewish state. Author points out that both Jewish communities are vulnerable. Israel enemies could once again become more potent military and inflict crashing defeat and annihilation.  The self-confidence and comfortable existence of American Jews could also proved to be as ephemeral as existence of German Jews of early XX century who considered themselves more German than Jews, fought bravely for Germany in WWI and a couple decades later found themselves on the way to gas chambers.

In conclusion author makes a few suggestions on what to do and expect:

I think that the problem here is not necessarily limited to Jews. It is the common problem in contemporary globalized world when Nation-states, as they formed in XVI-XX centuries, are under pressure to find some viable accommodation between their ethnic/cultural/religious foundation and supranational rules of game that increasingly combines world into one entity. The specific of American Jews vs. Israeli is just a part of these global processes. Its uniqueness comes from American exceptional quality as the country of individuals of multiple ethnicities, races, religions, and backgrounds united into one by common ideals of individual independence and limitation on government that provides enough space for everybody to maintain their uniqueness as individuals and/or groups with various levels of commonality. I believe that the best way for future development would be creation of something like United Democracies with USA standing as nation of individuals, whose needs for commonality with others is below levels of government intervention and force so these individuals would accept and tolerate religious and cultural differences of others, while other nation-states such as Israel could stand next to USA as nations of individuals, whose needs for commonality are much higher and require government intervention to enforce common religion, ethnicity, and culture. Such United Democracy could provide unified military defense, common market with standard rules of exchange, including leveling of cost of labor and such, protection of individual rights with most important being ability to leave country, which religion, culture, and rules an individual does not want to accept.