The main idea of this book is that the human society is developing somewhat cyclically going through 4 seasons or turns, like a year with about 20-25 years each turn, all together matching one long human life and defined by generation formed in condition of previous season. The seasons are: High – Awakening – Unraveling – Crisis and they neatly apply to American history. Correspondingly each season forms specific archetype of dominant personality: Artist – Prophet – Nomad – Hero, which in term moves through different stages of life, playing a different roles in different seasons. The idea of somewhat uniform cycles allows predicting the next development and author attempt to prove is by reviewing and predicting (somewhat correctly) the future.

The book is written in late 1990s and authors predict that the winter is coming in around 2005 and it will last for about 20 years when America would go through Crisis season completing 80-85 year cycle that started after previous cycle’s Crisis of WWII. Here is how authors define the Four Turns:

Authors also describe dominant type of personality for generation born in each turn:

Then they describe in details the meaning of turns and how it applies to history overall and to American history specifically.

This chapter starts with discussion of notion of seasons starting in pre-Roman Italy and then moving through a few historical societies: Rome, Babylon, Maya, Hebrew, Hindu, and Chinese.  Authors discuss specific Roman idea of Saeculum – period of time close to the length of human life during which full cycle occurs. Here is authors’ presentation for our society: 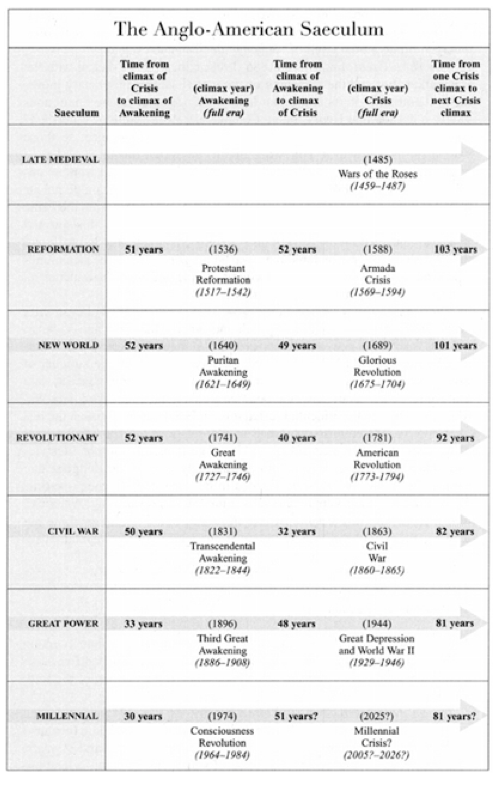 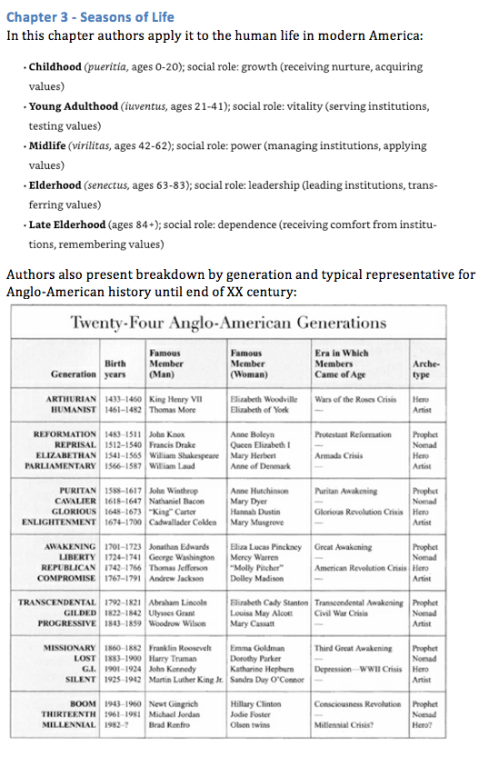 After that authors go into details of development in each of four turns of various cycles, including population, politics, economy, foreign affairs and other areas. At the end of chapter authors provide combined timetable of all Anglo-American Saeculum:

This is reference to literary work of Nathaniel Hawthorne and Gray Champions are sign of new beginnings of every 80 some years: Puritans coming to America, American Revolution, Civil War, Great Depression/WWII, and the next one, which authors writing in mid 1990s foresee coming in 2005.

This is the very interesting chapter in which authors from their vantage view of 1990s discuss the future Crisis that they expected to arrive around 2005. Obviously they could not know what is going to happen, but here is their list that now in 2020 looks much more severe than what actually happened:

Chapter 11 – Preparing for the Fourth Turning

The last part of the book and its 2 chapters are about preparation for the Fourth Turn and its crisis. It provides recommendation for each generation on what to expect and what to do in order to survive. By now it is mostly irrelevant, since the Fourth Turn is coming to the end and crisis thing that authors expected to happen did happen, albeit in somewhat different form:

In short, authors’ prophecies turned out to be correct in main.

It is quite unusual book on human society because it makes predictions, which proved to be true not only in their functionality, but also in their timing. Overall the idea that human history is defined by generations of people formed by circumstances of their birth and socializing and therefore acting differently sounds pretty good to me. It makes sense that children of the First turn – Prosperity initiate the Second turn – Awakening, creating idealized and therefore impossible demands on society, which makes their children initiate the Third turn – Unraveling undermining this society, its culture and traditions, and, eventually, weakening to the point when it movers to the Fourth turn – Crisis and then either falls apart internally, succumbs to external enemies, or rejuvenate itself by restoring its tradition, refreshing its culture, and mobilizing its internal strengths to defeat external enemies and/or suppress internal subversion. The final result of the Fourth turn is either disappearance of society under conquest, dissolution into multiple parts, or recreation as even stronger society it was before. In case of survival, it starts the First turn of the new saeculum, to repeat process over the next 80 some years.

I guess we are now at the final stages of the Fourth turn – Crisis, which I believe to be completed about the final part of the second term of Trump’s presidency in 2024. By this time American culture that was under sever attack starting at the end of WWII and conducted by communist/socialist sympathizers will come back roaring, after rejecting attempts to suppress its key features: individual freedoms of speech, freedom of association, freedom of self-defense, and democratic control over bureaucracies. The new economic accommodations will be created to incorporate Artificial intelligence into the system without undermining individual ability to prosper via productive activities.  Finally the new system of international alliances will be created to remove possibility of military confrontations either on small scale of terrorism or large scale of competitive societies seeking dominance.