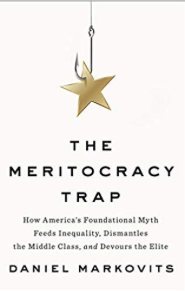 Author presents main points of this book in introduction as such:

Part One: Meritocracy and Its Discontents

ONE. THE MERITOCRATIC REVOLUTION

This chapter describes history of meritocracy raise beginning in early XX century when leisured rich started to be pushed out by up and coming meritocrats trained in elite schools. These meritocrats without great wealth worked hard to obtain it via complex intellectual work in law, management, science, and arts. Author discusses in some details the nature of such works.

TWO. THE HARMS OF MERITOCRACY

Here author uses a town of St. Clair Shores, which used to be prosperous manufacturing town with middle class and elite living side by side. Now it is not that awful yet, but it is not any more prosperous town, which elite left behind and where the next generation of middle class cannot repeat success of previous decades. The author looks at what happened to elite and finds it not less awful: practically unlimited long hours, constant work stress, and even difficulty to enjoy significant wealth produced via these efforts. In short, elite highly exploited.

Here author looks at one of the most elite places in USA – Palo Alto where rich people are miserable due to stress and poor find it hard to satisfy elementary needs like housing. Then author moves to discuss formation of new class of meritocrats via marriages and raising children in highly competitive environment, which requires lots of money to keep up with others. The next part of discussion is growing political division between meritocrats who use money, connections and skills to control government and use it for their benefits at the expense of middle and lower classes. In response these classes move to nativism and populism and use their numbers and democratic process to bring to political power their own champions. This political struggle scares author and makes him believe that country is moving to revolution.

This is somewhat repetitive description of how working rich pushed out from center stage old leisured rich, how much money top meritocrats make, how stressed they are and how they are different from majority of middle class that could not catch up with development of technology and knowledge based economy, seeing their own earning power stagnating or even going down. The result is the growth of inequality and corresponding stress on society.

This is about how difficult and expensive it is now to raise a meritocratic child, how much investment it involves from paying for upscale kindergarten to hiring multiple tutors, trainers, and consultants to get into top college without which it is not possible to achieve high level position anywhere. Author applies here monetary calculations for all fees and other payments required, eventually concluding that successful raising of contemporary meritocratic individual costs around $10 million. Author considers it as non-taxable inheritance.

Here author compares meritocratic and regular jobs in various areas from restaurant to hedge funds management demonstrating the huge gap between them in both: efforts and returns.

The chapter starts with Clinton and Bush who had similar childhood even if one was son of salesman and another son and grandson of high-level bureaucrat and politician. It is not the case any more – the lives of their children is very different than the same generation middle class kids. Then author goes to review various aspects of these differences: Work, Family, Culture, Consumption, and Place of living,

Here author reviews history of how this divide happened starting with increased role of education, changes in business management, and overall change in economics that values knowledge and skills much more than just plain hard work.

NINE. THE MYTH OF MERIT

In this final chapter author discusses where the notion of meritocracy came from and what is the nature of merit now in real live. He finds that it relates mostly to obtaining credentials, successfully playing some kind of bureaucratic games, and/or conducting complex activities in areas of information processing such as law, high level management, and such.

CONCLUSION: What Should We Do?

In conclusion author provides currently obligatory logically inconsistent invective of Trump and complains that “progressives” fail to answer effectively because they are under “meritocracy’s thumb”. Author points out that their move to identity politics and demands for equalization would inflict damage on meritocrats and middle class so it is not viable solution. He believes that solution is comprehensive restructuring of society:” To escape the meritocracy trap, politics must overcome all the vulnerabilities and bad incentives that meritocracy enshrines in public life. Both the rich and the rest must learn to see through the anxieties—from populist and nativist resentment through small-minded competitiveness and arrogant condescension—that currently divide them. Both classes must recognize that their distresses, and even their antagonisms, share in meritocracy a single source. And both classes must join in a coalition in which each eases its own afflictions by empathizing with, and even shouldering, the meritocratic burdens that now afflict the other.
“

In order to achieve this author suggests two paths to reform: ” First, education—now concentrated in the extravagantly trained children of rich parents—must become open and inclusive. Admissions must become less competitive, and training less all consuming, even at the best schools and universities. Second, work—now divided into gloomy and glossy jobs—must return mid-skilled labor to the center of economic production. Industry that is now concentrated in a superordinate working class must be dispersed widely across a broad middle class.”

Author also suggest to close meritocrats’ ability to transfer wealth to children via expensive elite education. Author considers it unfair tax shelter so he wants tax such expenses. On the other path: gloomy vs. glossy work author is looking for massive government intervention to define how what kind of jobs exists and how they paid.

Author is university professor and it shows. While his analysis is generally correct, it suffers from relatively poor connection to reality. For example the idea that law firm that charges 500 billable hours a week for work done by 5 lawyers has 5 people working non-stop 100 hours per week is very touching, but not at all realistic. Much more important however is author’s missing the most important part of the idea of meritocracy: who defines what merit is. Traditionally merit in American republic was defined by market place. Person who did something that other people voluntary pay for would earn more merit, expressed in more wealth. Because human beings generally are not that different in their capabilities, it led to society of nearly equals. Certainly a few people, who get in the very right place at the very right time and are capable to come up with some great idea that they are capable to implement, benefit hugely. These people like Rockefeller or Ford or Gates becomes million times richer than average not because they are million times smarter and hard working, but because being somewhat smarter they won lottery of time and place. This lottery winner as all other lottery winners are lucky exception to general rules of live and therefore have little impact on society’s structure. The current meritocracy comes not from ability to do something that people need. It comes from government power to take from people resources by force and redistribute these resources between hierarchical structures of government supported multitude of educational, legal, environmental, non-profit, and other bureaucracies, which do something that nobody would voluntary paid for. Correspondingly good places in these bureaucracies come from connections, elite education, based not on real knowledge and skills acquisition, but rather credentialism, racist preferences, donations, and other forms of corruption.   Idea that it could be remediated by more government intervention strikes me as something slightly funny and completely unrealistic.

In my opinion, the real remedy would be dramatic decrease in government intervention in economy and all other areas of human live, removal of massive redistribution apparatus that mainly redistribute wealth not from rich to poor, but rather from middle class to bureaucrats, making these bureaucrats rich. Actually it looks like American people already start applying this remedy by electing and supporting Trump’s administration that author and majority of his peers so sincerely despise.