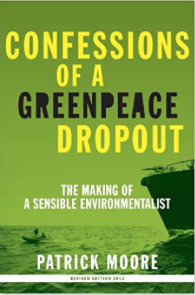 This book has two objectives. One is autobiographical to tell author’s story of growing up in logging community in the family of business owners, his education in environmental science that led him to activism and participation in creation of Greenpeace organization, which later become powerful anti-human advocacy group seeking limits on human use of environment and most of all power over other people, which in turn led author to drop out from this organization. The other one is to express author’s environmental views, which mainly come down to very reasonable approach trying to find way to build sustainable future by designing such forms of human interaction with environment that would create dynamically stable system supporting comfortable existence for humanity.

Here author briefly retells his story with Greenpeace, including critic of extreme movement to the left of this organization. More important, he formulates his environmental believes.

Here author defines his principles and provides his definition for relevant notions such as: Renewable, Sustainable, Clean, and Green. Then he critics all kind of environmental noise makers who are often driven by strive for power combined with some idealism, but not without greed for donations money and academic or political career.  He also expresses here his attitude to Philosophy, Religion, Politics, Dogma, Propaganda, and Science. Then he discusses the “Precautionary Principle” and how often it is taken beyond any reasonable limit.

This chapter is a brief review of current situation, specifically global warming, species extinction, and such. He critic unreasonable and unscientific alarmism and contrasts it with his vision presented in this book.

These chapters narrate author’s upbringing in the woods of Canada, his education and development as environmental scientist and creation of Greenpeace – organization that started by fighting nuclear testing by USA and France, but quite reasonably restraining it to Western testing because of unwillingness to spend rest of their life in Gulag if they would try doing the same for USSR or China. The Wales and Seals were the following up causes Greenpeace was fighting for with nice cameo of Brigitte Bardot who somewhat helped.

This is mostly about period when author was president of Greenpeace and how it developed into typical organization with power politics between different personalities, local offices, and ideological divisions. Author continues here narrative of their activities harassing waling fleets, oil companies, and such, but internal politics seems to be taking most of his attention.

This brief chapter is about Greenpeace big win on seals hunting, but more about author’s discovery that the goal should be not stopping human activity, but rather integrate this activities into such interaction with environment that dynamic equilibrium between using resources and restoring them could be achieved.

This is continuation of narrative about Greenpeace fight to protect baby seals and terrorist act against them by French authorities that exploded  “Rainbow Warrior” ship, but it is also about author discovery of Aquaculture – fish harvesting in closed waters.

Here author describes the end of his affiliation with Greenpeace, which move into direction of the use of pseudoscience to raise alarms, money, and prestige while author moved into direction of building sustainable future by growing salmon – the process he describes in some detail.

This is about author’s participation in a number of environmental round tables in UN and elsewhere and his experiences in art of negotiation. He also mentions his first encounter with ideas of global warming and then describes in detail the second, after the salmon, fission between him and environmental movement – his support of sustainable forestry based on specific rules negotiated with business that was countered by the hate and accusation in treason. He describes attacks by environmental zealots who wanted logging completely stopped. He also describes hypocrisy of Greenpeace, which fought sinking of outdated oil platform to create marine habitat, while doing the same with its own outdated ship.

This is about author’s position on wood, which he considers the most important renewable resource already produced in controlled environment similar to other agricultural product, albeit with much longer maturity period: decades instead of months.

Here author reviews all known sources energy and concludes that any effective mix should include nuclear power, which is the only serious source of energy that does not rely on fossil fuel. He provides detailed analysis of all aspects of nuclear demonstrating that fears are overblown and by far.

This is similarly detailed overview of food production where author once again finds contemporary activism unscientific and harmful, especially in regard to genetic engineering.

Here author addresses another panic promoted by environmentalists and quite reasonably notes that not only humans, but also all other species led each other to extinction, so there is nothing new about. The difference is that humans are the only species, which can and do consciously recognize the problem and act to remedy it. He also discusses how activist environmentalists capture more and more formerly scientifically sound publications such as National Geographic and turn them into sources of propaganda.

In these chapters authors reviews multiple areas where environmentalists fight completely save materials and processes that constitute contemporary industry and provide goods and services necessary for human live. He allocates especially significant amount of space to Climate discussion, providing multiple data graphs and concluding that, while human do have impact on climate it is not that significant, that the system is way too complicated and dynamic for scientists to be able reliably understand and predict its future changes at this point. So the hysterical alarms sounding all over the world combined with often successful attempts to generate financing, government grants, and regulatory power grabs that makes alarmist rich and powerful have no scientific foundations.

In this final chapter author summarizes his believes about environment in such way:

It is an interesting story of man growing from somewhat mindless activism to maturity and understanding that human interaction with environment not one way movement when benevolent or evil humans to something to environment destroying or conquering it. It is not even two ways interaction, but rather humans being part of environment, as any other species changing it, making it more or less fit for them. The key here is that this part of environment has conscience and recently acquired powerful intellectuals tools: science and technology, which allow them more or less control their own actions, predict future results of these actions, and correct these actions in such way that would be the most beneficial for humans. It is also nice to see person, who spent decades in activism, recognizing that lots of this activism represents the worse that is in humanity – strive for power over other people and ability to take advantage of them.