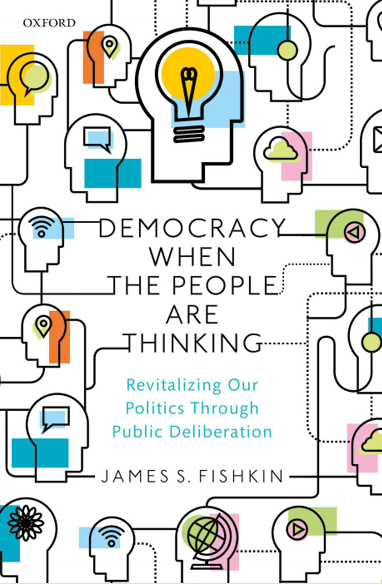 The main idea of this book is to present the new method of collective decision making that author calls Deliberative democracy and convince people that it is the direction in which society should move to overcome multiple deficiencies of existing competitive democracies. This deliberative democracy consist of decision making by randomly selected representative group of citizens who have time for deliberation on issues and contemplate the most appropriate decision to resolve these issues. Such deliberation would be conducted with support of experts and author presents a number of experiments when such method achieved the best solutions, obviously author believes that he knows what is the best.

Author starts with brief discussion of democracy and expresses his believe that it should be closely connected to people, but in real life it is generally not that connected. He defines the problem as difficulty to define “will of people” in environment of massive and well-funded advocacy by special interests, which are also quite adept in capturing support of people’s representatives and/or bureaucracy of the state. Author believes that the solution is deliberate democracy, which he defines as the system in which detailed deliberation of issue is conducted by a group of people selected for this purpose and is based on real arguments and facts. Author makes point that this book is not that much about theorizing as about real life experiments in deliberate democracy that he and his team conducted over the years in multiple places.

Here author reviews existing patterns of democracy when two or more political parties compete in election and then winner makes political decisions controlling society. He points out that typically such democracy considered a guarantor of civil liberties by virtue of elections, but deliberative democracy kind of turns it upside down putting liberties and ability to think and discuss issues freely ahead political freedom of election. Another point author makes is that government can achieve legitimacy either via process such as democratic elections or outcome – economic prosperity even in illiberal system of government. Believe in former is in decline and author believes that deliberate democracy could stop and even reverse this decline.

Here author expresses believe that democracy has fundamental contradiction between two main objectives: political equality and deliberation. The first one tends to empower people who have neither inclination nor ability for deliberation, resulting in deterioration of the second and low quality of decisions. He then adds the third issue – participation, which is an issue because impact of a voter on final decision is so small that it does not make sense for him to waste time on deliberation. Then author claims that Deliberate Democracy is the way to achieve all three principles: political equality, participation, and deliberation.

Part II: Can the People Rule?

Here how author defines it:

Inclusion: all adult citizens should be provided with an equal opportunity to participate.

Choice: the alternatives for public decision need to be significantly different and realistically available.

Deliberation: the people need to be effectively motivated to think about the reasons for and against competing alternatives in a context where they can get good information about them.

Impact:the people’s choices need to have an effect on decisions (such as who governs or what policies get enacted).

Here author defines four forms of democracy with Competitive, being a typical elections with political parties, Elite deliberations, being a selection of representatives with filtration such as US senate in original constitution, Participatory, being all kinds of referendums, and finally the one author promotes – Deliberative, when decision makers randomly selected and deliberate on solution under experts tutelage. Author provides table that breaks down their relation to principles:

Here author discusses how this form is deficient because it limits public influence only to really big issues, leaving lots of space for special interests capturing of political power.

4 Is There Democracy for “Realists’’?

This is discussion of research that demonstrate requirements for real democracy that could not be met in areas such as:

It short “will of people” could not be obtained when individual people recognize that they have little impact of political decisions, which does not worth effort of deliberation or sometimes even effort of vote.

These are just a few examples of what author believes is manipulation of voters via advertisement and media.

This is discussion of Madisonian ideas of elite deliberative bodies where elected representatives filter out elite individuals for deliberation. Author seems to be sympathetic to these ideas, but at the end has to admit that it really did not work as designed.

7 Participatory Democracies and Democratic Control: From Town Meetings to Referenda

This is about direct participation whether in town meetings or referendums, which carries the same limitation that democracy always has: quantity of people and quality of decisions. It just does not work in complex societies because it is not scalable.

8 Reflections on the Athenian Case

Here author discusses failure of Athenian democracy that lead to disasters of Peloponnesian war and corrections implemented to improve opportunities for deliberation by creating additional filter of randomly selected citizens to deliberate on decisions in some depth.

This is about defining specifications for selection of individuals for deliberation. Here they are:

4) The opportunity to engage policy arguments for and against proposals for action in an evidence-based manner.

7) Whether or not distortions in the dialogue are avoided.

8) Whether or not there are identifiable reasons for considered judgments after deliberation.

These are descriptions of test cases in different places when Deliberative Democracy technic was applied.

Here author returns to 4 types of democracies to restate his opinion that the first 3 are not effective and only deliberative democracy meat the requirements he defined. However he understands that replacement of existing system is not that feasible, so he suggests moving ahead by supplementing it with increasingly frequent use of deliberate democracy processes to solve specific problems.

Here author replies to critic of deliberate democracy in these four domains:

3 From Thought Experiments to Real Experiments: Reflections on Rawls and Habermas

Here author discusses reason for concentrating discussion on Deliberative Polls and his preference for analysis based on real experiments rather than thought experiments typical for philosophers. He discusses in some details ideas of Rawls and Habermas and their implications fro Deliberative Democracy.

This is another bunch of examples of using Deliberative Design for discussing a specific issue. In this case author specifically link this design to existing laws in regard to referendums, presenting it as effective way to improve participatory democracy.

Here author moves to practical implementation of Deliberative Democracy, suggesting creating “Deliberation Day”. The idea is to scale up process so the final Deliberation will be completed after serious preparation including such conditions as:

This is contemplation on how to implement Deliberate Democracy and change the Constitution without going through constitutionally defined method of amendments.

Here author spells need for the new institutions and Constitutional amendment to create them. One such institution would be 4thbranch of government something like “civic jurors” selected for deliberation. Another one would change the process of amendment itself so it would be easier to implement based on deliberation day resolutions. Author looks at few such suggestions in some details.

Here author describes actual process of deliberate democracy as constitutional amendment in Mongolia. He seems to be optimistic, but it was not a done deal at the moment of writing.

This is an interesting combination that was discussed in China. The point here is that authoritarian one party government allows deliberation, but instead of decision making as in democracy it would be just polling and recommendation. It was somewhat tested in China and Singapore and author claims that it mainly complied with requirements of Deliberation, albeit without decision making it is very limited.

In this final chapter points out that with all well known deficiencies of existing democratic systems his Deliberate Democracy would be a great improvement over current situation and that its implementation would go a long way to assure more valid collective self-rule than exists now.

I generally find idea of Deliberative Democracy very nice, but highly unrealistic and

I see the problem not in complexity of decision-making, but in reality of human interests.  In reality the elite part of population controls continuously increasing share of resources and generally uses it to their own benefits both material and psychological. This means that they would not give up this power for such funny reason as better method of finding solutions for the problems. My approach is that the process of decision-making is a lot less important than the scope of decisions that is brought into domain of “collective”. I think that the only way to achieve real democracy is to decrease collective decisions to absolute minimum by moving as much as possibly to domain of individual decision-making.  Take for example drugs use. As soon as decision about this is moved to collective it create need for the huge number of decisions that had to be made by somebody for everybody. Whether this somebody is king or bureaucrat or parliament is not relevant, it still millions of decisions: which drags allow and which not, how punish for drug use, how prevent production or delivery of drags and so on infinitum. However as soon as this decision is taken away from public domain into individual domain, it become distributed between millions of people each deciding for self. Some may decide wrongly, with very negative or even lethal consequences, but as long as this decision is personal, only decision maker would suffer or enjoy these consequences. It is very much unlike collective decisions in public domain when negative consequences of poor decision fall on multitude of innocent people, usually leaving decision maker well protected from these results. In short freedom and collectivism are not compatible and no amount of improvement in process of collective decision-making could improve on this defect. The only real solution is limitation of collectivism to absolute minimum such as: collective defense, personal freedom and property loss, prevention of and punishment for deception, coercion, and violence against individuals.