The main idea of this book is to translate author’s thinking based mainly on theoretical physics and mathematics into simplified presentation of his views on nature of our world and derive from these views answers to 10 questions that author believes to be the most important for humanity.

Why We Must Ask Big Questions

Here author describes his family and upbringing and how he get involved with science so much. Then he moves to big cosmological question of 1970s: did universe have a beginning. Author found the answer in black holes theory via combination of general relativity (very large) with quantum theory (very small). After that he describes history of his illness and accommodations that were made possible by contemporary technology, allowing him to lead active intellectual live as scientist and author of popular book on cosmology.

Since author designed this book as QA, with chapters being the questions, the best way to summarize is just to include his own answers as they are. 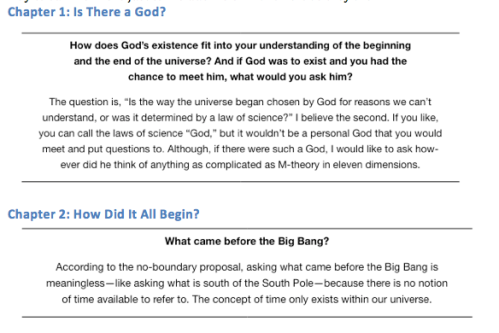 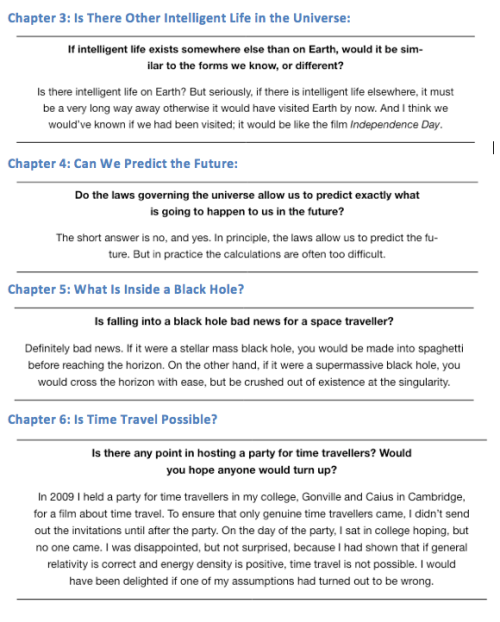 I believe that this could not possibly be known, unless and until God decides to make it known. Consequently the best way to treat it is American way: leave everybody to believe whatever they want and prevent anybody from imposing his/her believes on others

I actually do not think that it is meaningless question, but I also do not think that it is an answerable one. Our understanding of Bing bang, time, and space came from combination of observable facts in form of various physical phenomenon with mathematical modeling that kind of makes sense of this. This modeling could not possibly be final not only now, but ever because we do not know what other phenomenon would be discovered in the future and what mathematical modeling would be available if our data processing and modeling abilities will increase by factor of billions. In mine humble opinion there were no beginning as well as there will be no end, as it was said before: ”just one damn thing after another”.

I think it absolutely exists and probably in huge number of variation, but not necessarily that often and close to each other. Therefore limits on travel and communications are way too high, making idea of interaction improbable.

No way. There are too much complexity and variations to have it reliably predictable in details. Probabilistically, however, we predict the future everyday with pretty high level of precision like: it will be one Monday within the next 7 days.

The black hole is the product of our modeling, so description provided by author must be consistent with it. It does not mean that if one tried to inter black hole it is exactly what would happen.

We do it all the time, but only in one direction physically with speed being marginally changeable, but not by much. Psychologically there are no limits.

We’ll survive for a while, at least until some big thing happen that is beyond our control, like sun becoming supernova. Things like climate change are not a problem at all. The climate had always been changing and that’s why evolution gave apes with bigger brain advantage in survival, so they could adjust faster that it could be supported by DNA change. Besides the way it is presented now is mainly BS, serving to assure wealth transfer to bureaucratic scientists.

I do not thinks it make sense. Humans are not going multiply indefinitely. Moreover we already can observe shrinking rather than expansion of population, so there are enough places on this planet for everybody.

If question is if non-biological system can do everything that humans do, better, then the answer is yes. However if we consider human being a system that through internal presetting (DNA for example) can accumulate experiences, form self-perception as the entity separate and different from environment outside of border of this entity, set up objectives to achieve, and act to achieve this, then answer is no. It is “no” because such system would be a human, even if it is based not on biological material, but on, let’s say, silicone. However I do not see any reason for creating this new type of humans, except for limited experiment, because we humans love ourselves and do not need any competition. The use of AI as tool, functional, but not conscious would be good enough.

Technological future is trivial, it will happen. Much more important is social future. Humanity needs to move away from resource creation, allocation, and redistribution via Deception, Coercion, and Violence. Similarly humanity should discard the idea of one individual having power over other to force this other to do or not to do something. If we manage to do these 2 things within the next 50-100 years, we’ll be fine. If not, then some pissed of individual will use technology to create deadly virus or super powerful explosion or something else to end this all.