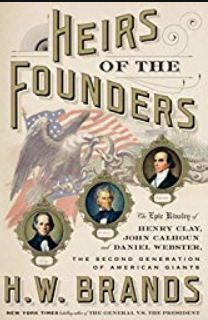 The main idea of this book is to review lives and achievements of 3 most famous and effective legislators of the first half of XIX century. Author considers them direct inheritors of founding fathers and credits them with several important achievements such as building legislative foundation of America, supporting building of infrastructure that allowed rapid development and most of all delaying Civil War for decades, even if the next generation failed to prevent it.

This starts at the end of story when Henry Clay – Kentucky Westerner, supporting Union, John Calhoun – Southerner rejecting it in hope to save the South as it was – with slavery and everything, and Daniel Webster  – Northerner lukewarm abolitionist who was pushed to the brink by his constituency, all where close to their deaths. This was completing the chapter of American history that all three of them created by fighting, intriguing, and compromising for 40 years since the war of 1812.

Here author describes background of 3 main personalities that defined legislative battles of the first half of XIX century.  Henry Clay – scion of Virginian family that moved west to Kentucky, John Calhoun – Scotch-Irish member of southern aristocracy, and Webster – Massachusetts lawyer who moved to politics. Author also describes 4thperson John Randolph – member of Virginia aristocracy. Author discusses the period at the start of their career when the most controversial issue was the war of 1812. East Coast was pretty much against it, while South and West were for, the former looking for stability, the latter for expansion to Canada and further West that British were trying to prevent by promising these territories to Indians.

Part Two: To Build a Nation

This part describes legislative fight to define the new nation when all sides believed that they were building foundation for much bigger country that it was at the time. Author starts this with discussion of end game of the war when Andrew Jackson’s victory at New Orleans brought victory when settlement was already signed without definite knowledge of who won the war.  Then author moves to period after the war when the 2ndBank of USA was established in 1816 and Henry Clay start promoting his American system of government that was based on infrastructure development for common benefit. Webster supported Clay. Author discusses in some details legal issues: Marbury that allowed Supreme Court’s power grab, Dartmouth college that limited states power to interfere into contracts, and McCullough that again limited state power, this time prohibiting states from taxing federal government. Finally author discusses fight over Missouri admission as a slave state to the union and eponymous compromise that was established mainly by Henry Clay’s efforts.

This part is mainly about politics and maneuvering of Andrew Jackson’s era, which really started with Jackson failure in election of 1824 when despite getting most of the vote he was deprived of presidency by politics of different factions in congress. The main political issues of the day were:

After Jackson eventually took presidency in 1828 two very important issues came upfront. One was the issue of tariffs that benefited the North and hurt the South, turning eventually into South Carolina’s failed attempt to assert state rights via nullification. Another one was Bank of the United States that Jackson considered key power player against interests of mass population that he represented. After several years of struggle Jackson successfully killed the bank.

There was also an important sideshow related to behavior of wife of John Eaton that was considered improper and was boycotted under leadership of Calhoun’s wife. It was kind of expression of hate to Jackson and class of people he represented, so his response was to get on the side of Peggy Eaton, with quite negative consequences for Calhoun standing.

Another issue of the growing import was the change in attitudes to slavery. Moving away from common perception of slavery as evil, albeit necessary and temporary, southern elite start promoting the idea that slavery is a positive good that benefited both masters and slaves by combining brain and sophistication of masters with manual labor of slaves who were too inferior in abilities to survive on their own. This was subject of debates between South Carolina Senator Robert Haynes and Daniel Webster. This issue was conflated with issue of state rights and nature of Union. This debate demonstrated how irreconcilable become this issue, raising clear possibility of civil war.

This part starts with Jackson realizing Calhoun’s enmity to him and everything that he represented that resulted in removing him from Jackson team. After that Calhoun found his place as passionate defender of South, which made him the secondary player in presidential games. Henry Clay tried to arrange opposition to Jackson on the basis of tariffs, bank, and American system of government building of infrastructure, all of which Jackson opposed. Despite mass propaganda and bribery campaign conducted by Bank’s Nicolas Biddle, Jackson popularity only grew as result of this battle and he easily won the second term. The battle of the second term was about states rights, nullification, and nature of American Union whether it was permanent contract uniting all states in one whole with superiority of Federal authority or it was just a compact between sovereign states that could leave it at will. Philosophically the issue was whether the Union is creation of states or creation of the people. Daniel Webster quite eloquently supported the latter approach, while Calhoun the former. Henry Clay managed to forge compromise and Jackson supported it, but it was clear that country moves to disunion and at some point it will run out of compromises.

Author starts this part by presenting view on events of foreign observer Harriet Martineau. She created popular salon in Washington and was able to observe main players in quite relaxed environment that presented better view of their personality than formal environment of Congress and their speechifying.

After that author retells completion of battle with the Bank and its destruction. Author stresses that despite battles in Congress about nullification and slavery, Americans were too busy with establishment of democracy with Andrew Jackson presidency and chaos that it created to get involved in anything more of internal politics, so the Union was save for the moment. Then author moves to another big issue of late 1830 through the end of 1840 – territorial expansion to the West and South at the expense of Mexico. This includes issue of Texas that was populated by illegal immigrants from US, started rebellion, become an independent slaveholding republic, and wanted to join USA. Abolitionists were strongly against such addition, so the issue was outstanding for a while. Meanwhile ideological struggle over slavery continued and increased over time, now with the clear cut positions: Southern – that slaves are less than human and had to be controlled and taken care of, and Northern – that slaves are human and should possess all rights of American citizens. In this fight Calhoun become a leading proponent of slavery and supported everything, war included to protect it. Webster was somewhat lukewarm opponent prompted all the time by his abolitionist constituency to fight it, and Clay, while clearly against slavery, was also against abolitionists, believing that their radical approach is way too dangerous. Author retells some important parts of this ideological struggle including the story of black man from New York who was kidnapped and sold into slavery, then escaped after 12 years. After escaping the man produced account of his story, that condemned this institution in very vivid way, becoming kind of ideological victory on par with Uncle Tom’s story. In parallel to these various stories author mentions Van Buren presidency that was killed by economic downturn and then unexpected presidency of John Tyler, elected as vice-president from Whig party who acted completely on his own when become president.

This starts with description of Daniel Webster’s opposition to Texas annexation that moved closer to reality with election of James Polk to presidency. When it came to the war with Mexico Calhoun kind of supported it, but tried to move it slowly in Congress, eventually failing. Webster tried at least reject territorial acquisition as objective of war, but fail in this too. Whigs even tried to censure Polk for initiation of war and then rejected Mexican treaty that gave USA new territories, but they failed to stop him.

Then author returns to the event he started this book with: discovery of gold in California. He even states his believe that if it would become known during negotiation with Mexico, the outcome would be different. Then he moves to discussion of Clay’s opposition to the war and, most interesting, his proposal of 8 resolutions that he believed would settle slavery issue once and for all. It was comprehensive solution in which Clay tried to meet needs of all sides, but it proved to be impossible. After discussing Clay’s failed attempt for compromise, author moves to Calhoun, who had no intention of compromising. He believed that balance of power permanently shifted to the North, so any compromise would only delay inevitable: the South cessation from the union. He envisioned the calamity that would come from any serious attempt to change southern society. The only way to save the union, Calhoun believed, would be for stronger North to accept South’s peculiar institution and forcefully support it, which in reality could not possibly happen. Interestingly enough, at this junction Daniel Webster tried to go pretty far to meet southern demands, even in contradiction of wishes of his constituents and endorsed Clay’s compromise. During the period of discussion of this compromise Calhoun, the most formidable opponent of compromise died. Compromise passed with big effort by young Stephen Douglas and was signed by president Fillmore.  This Compromise of 1850 did not last for long, but it still probably delayed the Civil War. Once again author returns to discussion of ideological war, referring to the book by kidnapped black citizen of New York that became important factor in making abolitionist case against slavery.

In the last chapter author describes deaths of Clay and Webster that occurred pretty close in time and kind of indicated the closing of the era of the first post-revolutionary generation of Americans and their attempts to build country and keep its different section together.  The next generation – generation of Lincoln born early in XIX century and matured in its middle were a lot less inclined to compromise, so the issues of slavery, state rights, and nature of the Union was decided the Civil War.

Unlike majority of history books this one is not about war and generals, but about politicians who for some 40 years often fought each other, but also sometimes worked together to build legislative framework of United States and resolve the great many issues of the period. They somewhat succeeded, but the most important and difficult issue of slavery, that in reality was based on irreconcilable contradiction between North and South.  The Northern capitalism was based on free labor, which produced great economic growth and rapid development, despite all negatives of wage labor it was based on. The Southern semi-capitalism was static, extractive, and foreign trade dependent, which could not be really called capitalistic because of its complete dependence on slave labor.

These politicians were smart and interesting people and too bad that all their efforts to achieve compromise failed. I wish they all had better understanding of military technology and imagination to fully appreciate the cost of war not only in lives and suffering, but also in money. Had they have any inkling of these costs, the full price of buyout of all slaves, letting them go free with full citizenship, supplied with massive ongoing support to make them self sufficient would be a very small price to pay indeed.