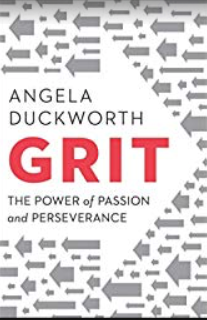 The main idea of this book is that the main ingredient of success is Grit, in other words the ability of individual passionately and persistently pursue his/her objectives. All other components that go into achievement such as DNA, hard work, and luck are secondary.

This starts with discussion of author’s experience analyzing what makes person a success in West Point where a significant number of people drops out despite very strong admission competition. This was the problem West Point was trying to resolve with the Whole Candidate Score calculated based on just about anything that could be digitized in previous history of the person. Despite this effort this Score could not reliably predict who would succeed. Author then states that she developed Grit questioner, measuring individual’s ability to persevere and it turn out materially better predictor who would stay to completion.  At the end of chapter author provides another example related to preparation for spelling competition.

Here author refer to her experience as a school teacher when she discovered that to her surprise overachievers who easily learned material often were left behind by less talented students who had much harder time understanding, but persevered until they learned.  Author also adds reference to authority citing Darwin who believed that people generally are close in talents, but differentiate in ability to persevere. After that author discusses work of psychologist William James who 40 years after Darwin concluded that humans generally greatly underuse their capabilities.  The next stop is research on musicians, which again confirmed that the best just work harder than the second best. At the end of chapter author retells her experience as McKinsey consultant, the company that dedicates lots of effort for the search of “talent”.

Here author moves to closer look at what constitutes human ability to achieve success in some area and finds that any activity consists of a multitude of sub activities that should be painstakingly learned and repeated until they become automatic, which is not possible without hard work and persistence. Author also present a nice graphic of how something is achieved:

Chapter 4: How Gritty Are You?

Here author provides questions, which allow reader to check his/her own level of Grit manly based on ability to be consistent in objectives and persistence, meaning not changing what one wants to achieve and not stopping working on it. Another important point author makes that objectives could be achieved only if there is clear understanding of how to do it and what are sub-objectives that had to be achieved in order to succeed:

At the end of chapter author discusses research on historical high achievers that clarify the scale: 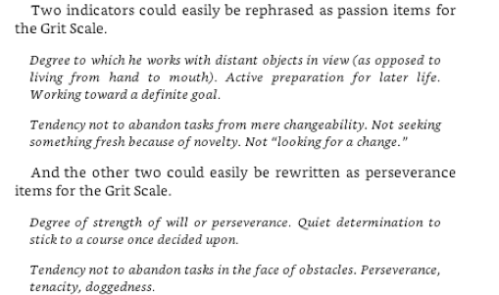 Here author discusses again nature vs. nurture and claims that Grit is not necessarily DNA defined feature and it could grow and here is brief recipe:

Next comes the capacity to practice

Finally it is Hope, which is not separate part, but rather component of all 3 above.

Part II: Growing Grit from the Inside Out

This is review of the first component of Grit that author deems necessary: Interest. First author states that when she grew up she was told to do what is needed, not what she had interest in, leading for her to do staff she later gave up like consulting. Then she reviews a number of stories of high achievers to identify how exactly people develop a passionate interest in something. She concludes that process starts with Discovery, followed by lots of Development, that eventually switch to Deepening.

The next step is component is Practice and author discusses work of Ericsson on Deliberate practice. She also provides a nice graph for various ways it happens: 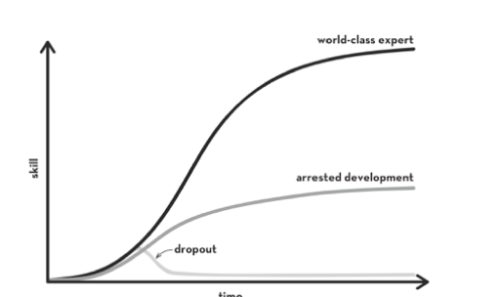 At the end of chapter she presents her own experience of preparing for TED talk as example.

Here author starts with defining purpose as “the intention to contribute to the well-being of others”. In this interpretation the purpose is intrinsically linked to “others”. She goes back to Aristotle to discuss ““eudaimonic”— in harmony with one’s good (eu) inner spirit (daemon)— and the other “hedonic”— aimed at positive, in-the-moment, inherently self-centered experiences.“
The she links it to Grit in such way: 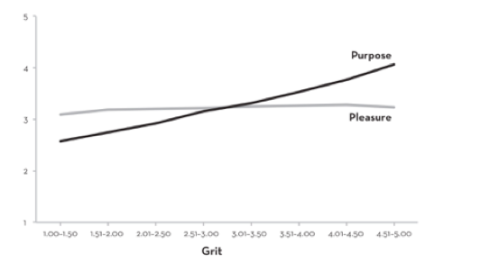 The final chapter of this Part is about hope. She defines it in relation to Grit this way: “Grit depends on a different kind of hope. It rests on the expectation that our own efforts can improve our future. I have a feeling tomorrow will be better is different from I resolve to make tomorrow better. The hope that gritty people have has nothing to do with luck and everything to do with getting up again.”  Consequently she links it to the work of Seligman on happiness and development of Positive Psychology, especially its part related to being in control as necessary condition of happiness as well as extreme case of learned helplessness to be an important cause of depression. She also discusses how to help people in development of right attitude: 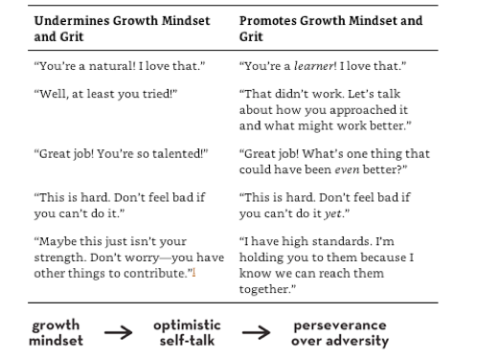 Part Ill: Growing Grit from the Outside In

This is about raising kids with Grit so they would be successful in life. It mainly comes down to creating environment in which kids are challenged, but not broken. Here is nice representation of this view: 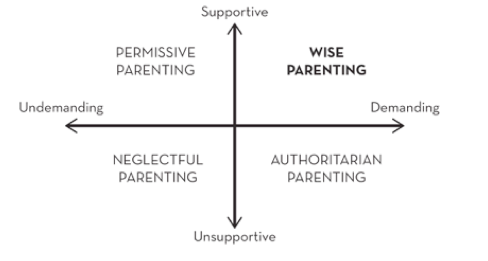 Chapter 11: The Playing Fields of Grit

The recommendation here is mainly to get kids involved in extracurricular activities and make sure that once activity is selected there would be no “give up” option at least for a specified period. Author also discusses in some details Personal Qualities Project and testing to help trace progress.

Chapter 12: A Culture of Grit

Here author discusses culture in somewhat narrow terms as culture within group or organization. Leaders of organization usually create such culture, but author also presents example of very gritty national culture, specifically Finns. Their culture is practically built on grit, they proud of this, and they treat it as the defining feature of national character.

The conclusion per author is very simple: want to be happy – be gritty:

The last word is a caution that it is possible to have too much of the good things, the grit included. This could happen when some direction of activity proved to be incorrect and one has to change it.

This is a kind of collection of examples and research results that clearly demonstrate somewhat trivial idea that if one wants to achieve something he should work on it and not give up until either this objective achieved or it cease to be meaningful. I think that grit, as it is described here is a necessary component of success, but I do not think it is decisive component. The world is complex and one need good timing, luck, some inherent abilities from their DNA, and generally to be in right place at the right time. If one believes that grit could overcome everything, try a simple thought experiment: imagine that he exactly as he was born 20 or 200 years ago. How different would be his life and how long would it be whether he posses grit in spades or nothing at all. That said, it is clear that without this component one could not get anywhere at all.