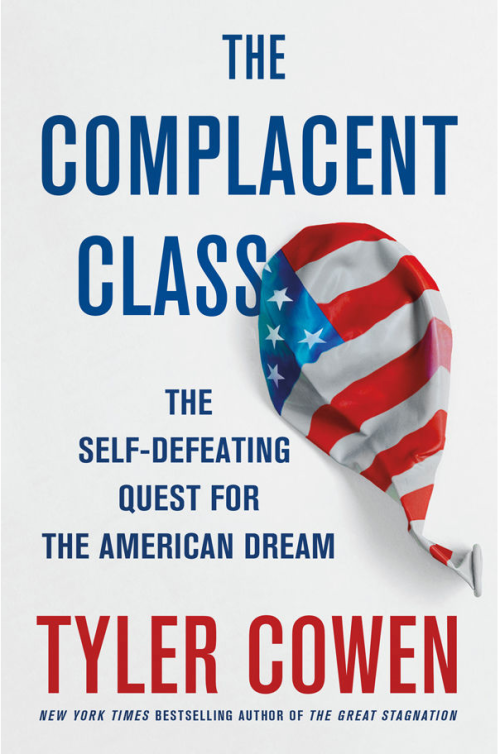 The main idea of this book is that America is currently in process of losing its economic dynamism, risk taking, mobility, and other features that made it an exceptional and the most prosperous country in the world. Author supports this idea with statistics about mobility, risk taking, decrease in innovation, and increase in segregation of Americans into smaller grouts of matching individuals who do not care and even are somewhat hostile to other groups. All these developments are taken together created environment of complacency and decay that bound to decrease quality of live, slow down or even stop improvement in all areas of live, and eventually could potentially lead to complete destruction of society or at least to dramatic internal conflict.

This chapter is about current structure of American society that seems to be stabilized and is supported by overall complacency of majority. The breakdown looks like this:

However the most attention author directs at people who are mostly complacent with current situation discussing roots and results of this compliance, which are presented by attitudes of NIMBY and similar acronyms starting with Not In My… Author sees sources of this in the new culture of matching when people find match for everything and do not care about externalities, preferring to have safety and calm.

Starting with this chapter author looks it signs of compliance as it shows itself in statistics. Here it is about Americans significantly decreasing their residential mobility. This had important economic consequences because highly mobile workforce supports optimization of geographical resource allocation consequently increasing overall economic output. Some very important reasons for those developments are practically closed areas where cost of living artificially made so high that they become inaccessible for individuals with regular income.

Similar processes led to reemergence of segregation this time not that much by race enforced by laws as by education and culture enforced by cost of living with race still important, but mainly a secondary factor.

This is about decrease in innovation, which author believes underperformed since early 1970s. Author discusses the reason in some details, but overall feeling is that it is result of monopolization of economy and dramatic increase in regulations that put everything new at disadvantage. Another source of negative impact of increased statism of American society on innovation is concentration of resources on some grandiose projects such as democratization of Iraq or Obamacare. Even dramatic improvement of information technology related to Internet does not compensate enough for lost dynamics of American Innovation.

This is about impact of contemporary information technology that allows everybody to get whatever his heart desires, whether it is specific type of music, art, books, games, dating or anything else. The point is that such massive matching makes live both more satisfactory because it is possible to find perfect match to one’s needs and wants, but also more difficult because of constantly growing multitude of offers. This matching extends also into productive areas of live like jobs, business interactions, and so on. The second part of the chapter is about winners and losers of the multitude of matching processes. Winners are matchers – individuals who are looking to find a good match and succeed, while losers are strivers – people who are looking to win rather than to match and wind up suffering from underachieving because the playing field is not a limited locality where one can be winner among limited number of players, but the whole world where number of players is in billions.

This chapter goes back to 1960-70s when baby boomers were rioting. Author poses question why this rioting spirit disappear and was substituted by relative calm. The reason he provides is bureaucratization of society, obsession with safety, and much more sophisticated and scientific policing that suppresses rioting in the bud.

Here author bring in example of China as contemporary dynamic society and lists a number of Chinese entrepreneurs who achieved huge wealth starting at such levels of poverty that Americans would have a hard time to imagine. Americans on other hand have it too good so they often forfeit struggle and just live their nice comfortable lives, which they do not want to put at risk even for potential of big gains. One final reason of American compliance is casualization of everything so it is not that much psychologically beneficial to acquire expensive staff and show off when richest people in the world have casual closes eat in casual places and despise show off the wealth.

The chapter on political stagnation points to small range between American left and right. It seems that both sides generally support big bureaucratic welfare state with limited market economy and nobody really trying to blow society apart and rebuild it on completely new principles like communists of yesterday. Author goes back to Alexis de Tocqueville and his ideas that static society and democracy not really compatible because different states would achieve stasis in different conditions and would become incompatible so the country would fall apart. It kind of happened with Civil War when instead of peaceful separation, one part of the country suppressed another one.

The main point of this chapter is that current situation cannot continue for much longer. Author lists a number of signs of growing unwillingness of American to remain complacent: Renewed racial riots in some cities, failure of establishment of both parties to stop Trump, instability on campus, and growing crime rates. Even more important is dysfunction of government and its failures in both international and domestic affairs. Author stresses idea of the Black Swan and its implication for regular Americans: the change could be sudden, tremendous, and with unpredictable results. Theoretically author moves to express preference for cyclical idea of history over progress idea, meaning that instead of continuing growth and improvement of quality of live we may be on the brink of disaster comparable to previous massive societal disasters from the fall of Roman Empire to the fall of Soviet Union.

I think this is a very good analysis of the current conditions of American society and ongoing bitter political strife of left’s resistance against American democracy. This struggle provides lots of factual support to ideas presented in this analysis. I also think we are on the brink of serious upheaval, but I do not think it is the consequence of complacency, decrease in mobility, or separation of Americans into subgroups of matching individuals. I think it is a natural process of obsolesce of current method of production caused in main by increase of productivity to the level when human labor become increasingly redundant, leaving more and more people without meaning in live and limiting their ability to achieve objectives planted in their minds by currently prevalent model of socialization. I am sure that this model will be changed over the next 30 to 50 years, but I afraid this change would be quite painful.