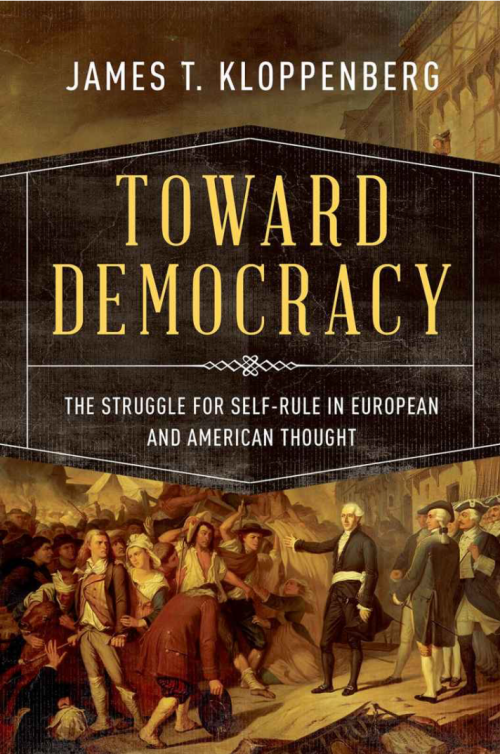 The main idea here is to provide historical support to the notion that democracy was developed as a method of collective decision making while minimizing violence. The narrative includes a bit of ancient history, but mainly concentrates on development over the last few centuries of democracy in the Western world, its ideological support by two distinct types of Enlightenment French and English/Scottish. It stops at the brink of American Civil War when idea of democracy was practically pushed far back and was seemingly highly dependent on this war’s outcome.

Introduction: The Paradoxes of Democracy

Democracy became a leading ideal form of society, but it is often misunderstood. Author claims that it “arose from violence and has never strayed far away from it”. The focus of this book is democratic thought in America and changing meaning of democracy over time. Most of all it is about the implementation of ideas and gaps between ideals of democracy and its practice, which makes democracy somewhat unsatisfying, leading to it’s multiple paradoxes.

Part I Roots and Branches

Chapter 1 Born in Bloodshed: The Origins of Democracy

It starts with the story of mayor of Bordeaux Montaigne in 1585 that survived on several occasions using ethics of reciprocity, which he promoted in his later essays. From here comes author’s point that democracy is born by violence as a tool to avoid or at least diminish violence via conversation and search for accommodation. This follows by the discussion of ancient Greek democracy of Athens with its initial notion of individual rights, however limited by popular will. After that author briefly reviews various philosophical approaches and implementations of this system in Rome and medieval Europe with somewhat special attention to religious thought: first Hebrew and then Christian with consequences of reformation and religious wars. The common outcome of both was general revulsion to rule of demos as meaninglessly violent that had to be contained by organized leaders of society: kings and aristocracy.

Chapter 2 Voices in the Wilderness: Democracies in North America

This chapter looks at initial European settlement in North America, which was to significant extent done by the people who did not accept conclusion of evils of democracy, but rather saw it as the better solution for society organization in which every member was equal in their relation to god and to others. Author looks in details at New England puritans as founders of specifically American approach to the ruling society, but also and somewhat unusually, author also looks at diversity of American colonial societies many of which quite vigorously supported ideas of divine sovereignty and king’s power. Practically however regardless of ideology all settlements had to develop various forms of self rule for simple reason of distance, difficulty of communications, and just plain lack of interest on the part of British kings and authorities. These forms necessarily included elections of rules and laws makers and enforcers who would act on more or less consensus basis because nobody really had enough power to impose their will without majority consent.

This chapter goes back to Europe to discuss English Civil war of XVII century and how it led to Glorious revolution and ideological struggle that developed at the same time:

At the end of this chapter author discusses Milton’s poetic work as representation of ideology and general attitudes of this period when monarchy was destroyed, then restored, then restricted and made compatible with increasing democracy.

The final chapter of this part is about Glorious revolution and its impact not only on English settlement, but also on American development. It also looks at writings and story of Algernon Sydney and John Lock who developed ideas that went into foundation of American revolutionary thought. However it was not only thought, but also growing American reaction to king’s attempt after restoration to bring American colonies under more direct supervision. This reaction obviously was quite negative because of incompatibility between de facto self-rule of colonies and hierarchical monarchical rule of England.

Chapter 5 Sympathy, Will, and Democracy in the Enlightenments of Europe

This is about French Enlightenment: Voltaire, Montesquieu, d’Alembert, Diderot, and Rousseau. The key difference here is much more value assigned to emotions and equality of results. It also reviews polemics between Rousseau and Hume who represented Scottish enlightenment, which was based on common sense rather than emotions. The views of Adam Smith and Hutcheson also reviewed here.

Here author moves to American Enlightenment, which had much more practical character because its people were involved in practical politics of the Democracy. It starts with Ben Franklin, and then goes to other founders. It also structured about main intellectual events of this time including Great Awakening and revolutionary developments.

This is continuation of review of American development, especially on how movement for independency becomes intertwined with ideas of democracy.

This is about post revolutionary period when initial regime established by Articles of Confederation becomes insufficient in the eyes of many to support efficient political system in the new country. It reviews people, ideas, and debates that led to creation of American Constitution.

This is look at European type of Democratic revolution, which is decidedly different from American Revolution – French Revolution. The reason was huge difference in structure and attitudes of these two societies. Americans generally were much more similar to each other generally separated from existing English hierarchies of the society with their own society had its emerging hierarchies in flux, while French had well established layers of society with different world views, ideas, and approaches including religious vs. non-religious worldviews resulting in violent clash of huge proportions.

Chapter 11 Virtue and Violence in the French Revolution

This is about ideological war between supporters and opponents of French approach with Paine and Burke being good representatives of these fighting ideological camps. It also describes sequence of events in France and even somehow manages to go into ideas of feminist writers.

Chapter 12 Democracy in the Wake of Terror

This is detailed description of period of terror and, more importantly different reaction to it and its relation to Democracy in America and Europe.

The main difference is American understanding stressed reciprocity between individuals and society in democracy as key element of making it work. European approach was based on finding individuals best in expressing general will and then violently force all other individuals to comply with their directions. Net result of this was general rejection of this form of democracy and its practical elimination in Europe after defeat of Napoleon. In this chapter author look in details at parallel development of America, Britain, and France to analyze how exactly it happened.

Chapter 14 The Tragic Irony of Democracy

This covers developments in America leading to Civil War and its challenges to democracy. It also looks at other side of Atlantic where British moved on with reform movement, while Germany and France experience failure of revolution of 1848 and Napoleon III rule correspondingly. No surprise that at this point Lincoln was probably right that American Civil war was decisive for Democracy and that Union victory was necessary for it to survive. It did survive, but the following developments leading to gilded age brought mass corruption taking it far away from theoretical ideals. Author ends with a remark that Democracy proved to be malleable and its success depends on ability of individuals to internalize limits on freedom that democracy given them.

It is an interesting approach to defining reasons for and meaning of democracy. I basically accept the idea that democracy is nothing more than a tool to minimize violence, but I deeply resent the idea that it is perfect and universal tool. Actually I as many others, think that it is pretty crude and ineffective instrument that is acceptable only because there are no other instrument better than that. The history of democracy provided here has two interesting points: one is that democracy in America developed in kind of natural way, not possible in other places, and another one that two enlightenment movements French and English/Scottish/American, while being quite close ideologically, nevertheless brought dramatically different results when implemented in two different cultures. Finally it is interesting how far from inevitable progressive development believed by determinists Marxian and others the real history actually was removed and how close to the rejection of very idea of democracy humanity came in the middle of XIX century. With my one and only life I feel really lucky that such rejection did not happen.