This book is directed against new American elite of educated bureaucrats and federal politicians that formed, expanded with government outreach, and become dominant power in society over XX century, substituting old American elite of business owners and local politicians. All these bureaucrats and politicians dramatically increased their wealth elite at the expense of decreasing dynamics of economic development and frustration in middle class population. The book includes recommendations on decreasing this power via democratic process and new legislation.

PART 1: The Greatest Threat to Liberty

This is the brief review of history of nature of relationship between rulers and their people. The key points always were:

The real philosophical meaning of American Revolution was not just democracy, but individual rights. In reality it meant freedom of individual to control his/her own live including the products of one’s effort. The big driver of American Revolution was British intervention into colonial economic live not only with taxes, but also with regulations. Author also looks at how this impacted lives of 3 founders: Franklin. Adams, and Hancock turning them from prosperous British subject into revolutionaries who risk everything.

This is look at American Constitution as only partial successful attempt to limit power of ruling class via division of powers, cumbersome decision-making process, and protection of individual rights.

The limitations of American Constitution worked relatively well for the main part of XIX century when America was country of economically relatively independent farmers. It begin failing when industrialization and big cities changed nature of the country. It opened way for rebranding of ruling class from aristocracy, which never really took root in America into “progressive” experts and social engineers who promise reorganize live into much better way than it traditionally was. Author looks at Planned Parenthood and Orwellian shenanigans around healthcare in US and Britain to demonstrate how rebranding was done.

This is about superiority complex that is typical for members of not just ruling class, but wide mass of semi-educated bureaucrats who are backbone of democratic powers of this class. This chapter provides a couple of nice examples of self-serving pseudo-scientific research that claim to demonstrate intellectual superiority of “progressives” and, as one could expect, couple examples of them using non-profit and government entities for enrichment and suppression of competitors.

This is a review of century long process of neutering American Constitution making it into meaningless paper used to justify whatever ideas ruling class wants to implement at any given point of time. It also looks at current apotheosis of this process during Obama administration when written laws interpreted and reinterpreted any way ruling class wants on practically monthly basis when the same claim on taking in Obamacare law is considered as tax for some purposes, penalty for another, and god sent gift to the individual being robbed overall.

PART 2: Mismanagement of Government by a Self-Interested Ruling Class

This part is pretty much the list of problems either created or made much more dangerous than they would b otherwise by current American ruling class including both parties: Democrats and Republicans. Here are some graphs and tables demonstrating this:

PART3: Securing Our Liberty Once

This is analysis of popular support for or against ruling class. It seems to be shows that while based on questions such as whether people want more government services or more economic freedom majority prefer more freedom and less services, however when it come to actual elections people vote for representative of ruling class. Maybe it is because the choice between R and D is just between different flavors of ruling class? Here are participation data showing that only about a half of eligible voters participate:

Here are author’s recommendations on ruling:

Here are proposed changes for control over money supply with stress on ruling in currently prevalent bubble economy. Here is its nice illustration: 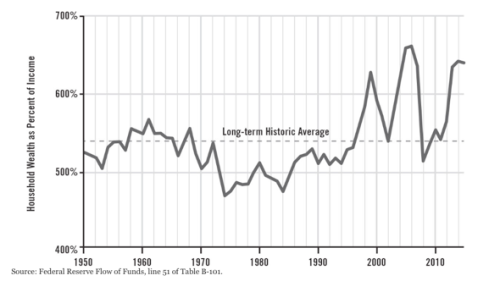 The last chapter is about the nature of America as country built on the idea of ruling in the ruling class and denying it control over society. As long as this idea was adhered to America was the most prosperous country in the world. Even now despite consistent decrease in support for this idea for the last hundred years and willingness of significant part of population to relay on ruling class for redistribution to them other people’s wealth, Americans still have about 30% of world’s wealth while being only 5% of world population. However American population wealth growth is actually stagnating for the last 20 years. This failure of improvement causes serious disturbance because being better off than others is not a big help.

I have no good feelings for ruling class either in history or now and actually have complete contempt for many of its representatives. I believe that America historically is exceptional country in its unusual access of resources to non-elite and consequent tremendous generation of wealth that occurred in this country. I agree that current development in this country starting with progressive movement in early XX century and currently bringing country to the state of stagnation is not sustainable. However I do not think that it will be smooth, easy, and involve just some relatively marginal legislative changes. I think that we are rather on the brink of massive change in constitution and approaches of population that will take considerable amount of time and would require serious clashes between different groups of population probably amounting to full-blown civil war (hopefully it would be cold civil war).